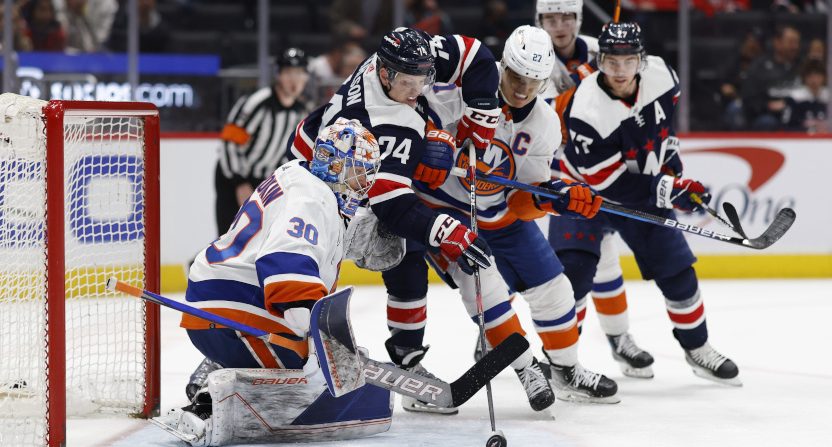 The NHL’s new national TV arrangements with Turner Sports and ESPN appear to have produced good audience results in their first season, at least when it comes to the games on television (much of the ESPN package is streaming-only on ESPN+, and we don’t have numbers for that). As per Austin Karp of Sports Business Journal, the league’s national TV broadcasts overall look to be up almost 20 percent year over year from last year’s games on NBC and NBCSN. Here’s more on that from Karp’s piece:

With only a few NHL games left in the regular season, the league is looking at a significant season-over-season viewership increase for ’21-22 across TNT, ABC and ESPN — in the range of an 18% — and likely good enough for the NHL’s best figure since ’16-17. Turner Sports had will see a significant gain on its own vs. what NBCSN averaged during its final season in ‘20-21. TNT, which had the tonnage of NHL cable TV games this season with 51 telecasts, averaged 361,000 viewers, which is up 29% from what NBCSN drew last season, and up 24% from two seasons ago.

Karp notes that in addition to the 51 Turner telecasts, there were nine on ABC and 16 on ESPN. Through the nine ABC games and 14 of those ESPN games (the last two were Tuesday night, with full numbers not in for them yet; one of those was the New York Islanders-Washington Capitals game shown above), Disney was averaging 639,000 viewers across ABC and ESPN, 491,000 viewers for ESPN broadcasts only. Meanwhile, Turner put out this tweet Tuesday on their own numbers:

It’s notable to see TNT posting that female viewership gain versus NBCSN in 2020-21, and it’s also notable to see them citing increased NHL engagement at Bleacher Report (12 percent year over year) following this year’s launch of B/R Open Ice. The latter speaks to some success for the various content and event strategies Turner has done with that brand.

However, it’s worth keeping in mind that the year-over-year comparisons are to a supremely unusual 2020-21 season, which began in January 2021 (just months after the pandemic-delayed 2019-20 season concluded on Sept. 28, 2020) and featured just 56 regular-season games per team rather than the normal 82. And its total audience delivery average of 391,000 viewers (across 16 NBC broadcasts and around 84 more NBCSN broadcasts) was the lowest in the 16-year history of the NHL on NBC.

That doesn’t mean the year-over-year comparisons are irrelevant. But there are notable differences, and there are notable differences in the broadcasting setup. There are less overall nationally-televised (as opposed to streamed; there are way more games aired if you factor in ESPN+ streaming, but those numbers aren’t included here) games now, and that probably comes with an audience improvement (less non-marquee matchups, less games at odd times). But there’s also a lower percentage of broadcast TV games versus all nationally-televised games (9 of 76, 11.8 percent, versus 16 percent) now, and broadcast versus cable TV remains a significant difference in reach, so it’s impressive that this year’s numbers were higher despite that percentage drop in broadcast TV games. (TNT, ESPN, and NBCSN all had similar Nielsen carriage estimates at the start of this year, 79,947. 79,756, and 78,564 million homes respectively (despite NBCSN closing for good on Jan. 1), so there isn’t a big change in access in moving games from NBCSN to TNT and ESPN.)

There are maybe some bumps there from people interested in the new networks’ coverage. There are also probably some from ESPN’s increased promotion of the NHL now they have rights to it again (they’d improved their non-rightsholder coverage since the dark days of “it doesn’t translate to television, and where it really doesn’t transfer much to is a national discussion” back in 2012), and from Turner’s promotion of the NHL on their other content and on Bleacher Report. And it’s definitely positive for the NHL to see its national numbers on the rise again following four rough seasons, where they averaged 417.000, 424,000, 398,000 and 391,000 regular-season viewers respectively across NBC and NBCSN: the latter two were pandemic-impacted, but the first two weren’t. This does look like the league will post its best regular-season TV numbers since the average of 474,000 viewers it drew in 2016-17, and that’s certainly a good sign for it.