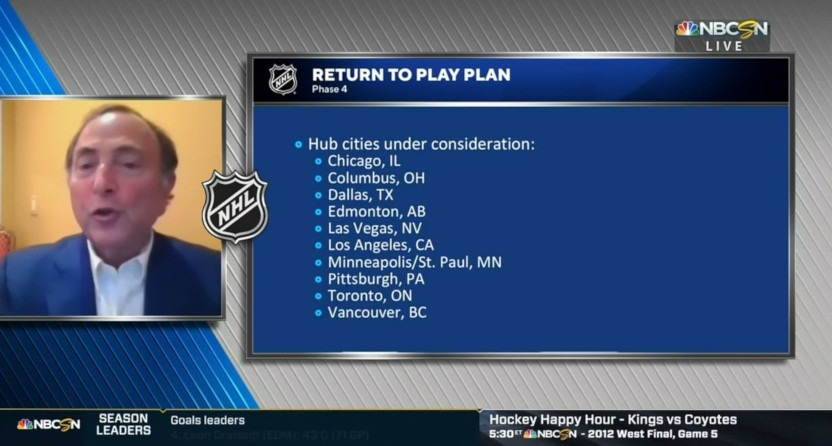 NHL commissioner Gary Bettman announced the league’s current return to play approach on NBCSN Tuesday, and while there are still a lot of details yet to be worked out, Bettman’s announcement did provide some clarity on what’s ahead. For one thing, the league officially announced the details so far of their plan for resuming play; many had previously been reported, but this made it official. For another, this confirmed that the 2020 regular season is over, and that if the league does manage to resume play, it will be with a 24-team tournament in two “hub cities,” with the top four teams in each conference playing for seeding in the “first round” of the regular playoffs and the other 16 teams playing for eight spots in that first round.

And perhaps most notably, while Bettman didn’t announce a firm start date for the postseason tournament, it did provide context that the earliest possible start of Phase 3 of their plan (formal training camps) would be in early July. The tournament would likely start several weeks after that, with the qualifying, first and second rounds taking “a little over a month” as per Bettman. So that sends the NHL playoffs into September, and potentially puts them up against college football and the NFL (if those sports do resume in September; the NFL at least plans to, and at least some college football may be back then too). And that could be interesting from the broadcast side. But before we get there, here are looks at the potential “hub city” locations and at the early matchups:

Return to play teams in the two hub cities pic.twitter.com/qAsrxYngZK

NHL Western Conference seeding and matchups if the league returns to play.

STL, COL, VGK, DAL will play a round robin to determine seeding 1-4.

Best of 5's to determine opponents for those top four
EDM vs CHI
NSH vs ARI
VAN vs MIN
CGY vs WPG pic.twitter.com/9PVmBZo296

And it’s worth noting that this is all extremely preliminary, as economic and safety deals both need to be done still. Bettman said in his announcement that “We remain focused on the safety of our players, coaches, support staff, and arena personnel. We will not set dates, choose sites, or begin to play until we know it is appropriate and prudent and are approved to do so,” and NHLPA executive director Donald Fehr said in a later interview with NBCSN’s Mike Tirico that there’s still quite a bit to be worked out:

“There is an ongoing if question, can we satisfy the health and safety of the players and the rest of the staff and everybody else involved, can they be protected? And can all the rest of the agreements we need to reach be done? But if you don’t have something you’re planning, if you don’t have something that you can work towards, then we’re going to end up getting to a place in which we say ‘All right, we can do it, let’s go ahead,’ and we won’t be able to. So you have to do this in stages. But as Gary said, there has never been any dispute that this can’t go forward unless the health and safety can be protected of everyone involved.”

“Unless there can be adequate testing, along with all of the other measures that we’ve put into effect just to open up training camps, open up Phase 2, which we hope to be able to do sometime next month, those obviously are real concerns.”

Fehr also told Tirico that the formal training camps will likely take around three weeks, with their specific length depending on how the Phase 2 measures (players skating in groups of at most six) go.

“Hopefully we will get to that state and then it will be as long as it needs to be. I would like to believe that the operative number is around three weeks, but if we can do it a little shorter or if it takes a little longer, it does.”

And while Fehr hopes to see the Stanley Cup handed out this year, he certainly didn’t say that’s going to happen for sure.

“I certainly hope that we can, I certainly hope that’s the case, I certainly hope all the necessary agreements, health and safety and economic and the rest, can be finalized so that can take place, but I hope it for another reason. Because if we can, that would suggest the world is beginning to return a little bit towards normal. Because that’s something we want that’s in everybody’s interests, and we can’t forget that.”

If this plan does proceed further, there will be a lot of interesting elements to consider; what cities are chosen as the hubs, what the economic arrangements between the leagues and players and rightsholders are, and what the broadcasting arrangements are. In particular, it will be worth keeping an eye on if regional sports networks get to provide broadcasts of their teams in the new qualifying/seeding round as well in addition to the national feeds to help make up for the regular-season games they’re missing, and it will be worth watching which NBCUniversal channels the extra qualifying/seeding round games wind up on (there’s a long history of them using whatever they can during early NHL playoff rounds, and sometimes putting games they will think will have low national appeal on lower-distribution networks). And this could get more interesting still if this winds up being when NBC has football commitments on NBC and NBCSN. But there are still a lot of potential roadblocks out there before this plan actually kicks in, and we’re a long way from the actual dates. We’ll see how it goes.