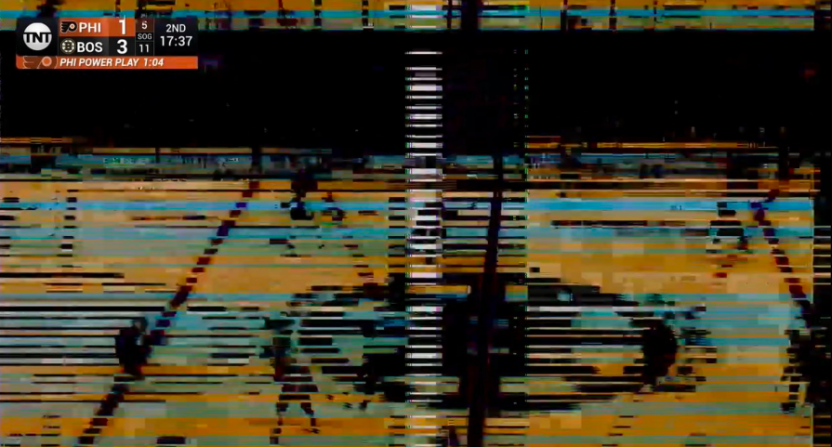 It was a big night for Turner Sports as the launch of NHL on TNT coverage with a preseason doubleheader featuring the Boston Bruins hosting the Philadelphia Flyers followed by the Vegas Golden Knights hosting the Los Angeles Kings. The puck dropped on their coverage around 7:00 p.m. EST and, well, it looks like they’re still working out the kinks.

First things first, the most important question is what the NHL on TNT score bug looks like and we’ll go ahead and give that thumbs up for its clean look.

Here's your look at the NHL on TNT scorebug, which looks pretty clean and unobtrusive. pic.twitter.com/nFx5kfEHN6

Here’s a look at the expanded bar across the top of the screen, featuring power play info, players on the ice, and even a shot count.

The regular bug appears in the top left corner, that is, unless the broadcast does something that we didn’t think could happen anymore and sends the top of the screen to the bottom, as if someone was messing with the tracking on their VCR. As Tim Burke points out below, we don’t even know how that is possible.

you are watching the NHL on TNT pic.twitter.com/qWGanCwHB1

Some people also screengrabs of fuzzy, distorted broadcasts the likes of which many viewers haven’t seen since they tried to watch The Spice Channel.

the NHL on TNT experience pic.twitter.com/tFwEuT96DR

There were also reports of audio issues from some viewers but we’re going to assume these are issues that can get worked out. In the meantime, we got our first meme-worthy moment involving the NHL on TNT studio in Atlanta. During the first intermission, host Liam McHugh, analyst Anson Carter and analyst Rick Tocchet were having a discussion around cross-checking when Tocchet got up to demonstrate how his solution would be to kick an opponent in the balls.

We start with Rick Tocchet suggesting players kick back with their skate into the nuts to stop the cross checking epidemic pic.twitter.com/hkcw3dwMix

There’s still a lot of hockey ahead this evening and this season for Turner but the early returns seem promising, especially amongst sports media folks who already have an affinity for TNT’s NBA version.

Have watched 5 minutes of TNT's intermission show and have experienced:

Off the rails already. Big fan

The NHL on TNT studio already better than the NBC studio.

But you know, the bar was hell.

After watching the very first studio segments for the NHL On TNT the mandate is clear…let the on-air people show off their personality and entertain the viewers watching at home not just analyze and discuss.

Sound familiar? Like a certain NBA show on the same network?