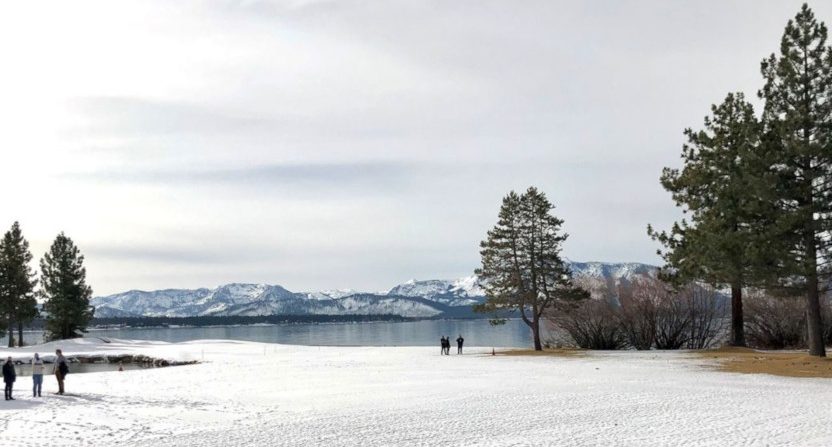 While NBC will feature more regular-season NHL games on their broadcast network than ever before this year, even with a shortened 56-game season, they are missing out on a few typical event games. There’s no All-Star Game this year (it had originally been scheduled for Sunrise, Florida), there’s no Winter Classic outdoor game (scheduled for Minneapolis), and there’s no other previously-planned outdoor game (one had been set for Raleigh). But, as Sportsnet’s Elliotte Friedman reported Friday, the league is looking to play two games on Feb. 20 and 21 on a specially-built outdoor arena at Edgewood Lake Tahoe Resort in Stateline, Nevada (a photo Friedman included in his piece of the approximate planned location is seen above), and those games (Vegas Golden Knights-Colorado Avalanche and Philadelphia Flyers-Boston Bruins) are going to be featured on broadcast NBC:

According to multiple sources, the NHL is beginning its Mystery, Alaska experiment, with four teams as part of a unique two-game, two-day “Outdoor Weekend” showcase at Lake Tahoe. Edgewood Tahoe Resort, home of the popular celebrity golf tournament, is hosting these games, which will be played around the 16th, 17th and 18th holes.

…Fans will not be in attendance, with the number of people limited to about 400 — basically the teams’ travelling parties and whoever is needed to work. It will give television different opportunities to broadcast the games, such as drone cameras.

It is, at this point, a one-year project, but if it works, the NHL may consider making off-beat, “natural wilderness,” picturesque locations a regular occurrence. Whatever the case, this has a chance to be a special look in a challenging season.

As per NBC’s broadcast schedule, the Feb. 20 game (Golden Knights-Avalanche) is set to be the only Saturday game on broadcast NBC until April 24. So the idea of a special outdoor setting helps explain that. And Scott Burnside of The Athletic and Emily Kaplan of ESPN both confirmed with sources that the league’s going for this. Burnside added some background on other locations the league considered:

NHL officials have been looking at possible venues for such an event since the summer’s return to play playoff tournaments were being held in bubble settings in Toronto and Edmonton. At one point, there was discussion of having two outdoor events, one in Canada and one in the United States. Lake Louise, Alberta, was on the map earlier and there was some discussion about Canmore, Alberta, as well as a number of mountainous areas in the western United States, like Utah and the Grand Teton area in Wyoming, east of Idaho. Logistics, including being able to build and maintain two NHL-style rinks in different locations in different countries, have at this point have reduced this idea to a four-team event in Nevada.

We’ll see how this plays out. And if the league does go ahead with this plan, we’ll see how it performs in the ratings. While the NHL’s outdoor games (the New Year’s Day Winter Classic in particular) drew very well at first, some recent Winter Classic editions (including the Nashville Predators-Dallas Stars game last year, which averaged 1.97 million viewers, albeit with an hour of pregame included), haven’t put up great ratings numbers.

And while the Winter Classics have still outdrawn typical indoor games, that’s often not saying all that much. And the other non-Winter Classic outdoor games have usually drawn even lower numbers, with some of them even airing on NBCSN rather than the broadcast network. But the outdoor games have still seemed to be worth it for the league and the clubs involved; they’ve allowed for a lot of ticket sales, with most of these games played in big stadiums, and they’ve brought some attention to the NHL’s regular season (and to NBCSN for the games airing there). With a no-fans event like the plan here, though, the TV ratings are the whole reason to do it. So we’ll see what they turn out to be, and if they’re good enough to prompt a return to this kind of plan in future years.

Correction: This post initially had the resort in Shoreline, NV, which doesn’t exist. It’s in Stateline, NV.