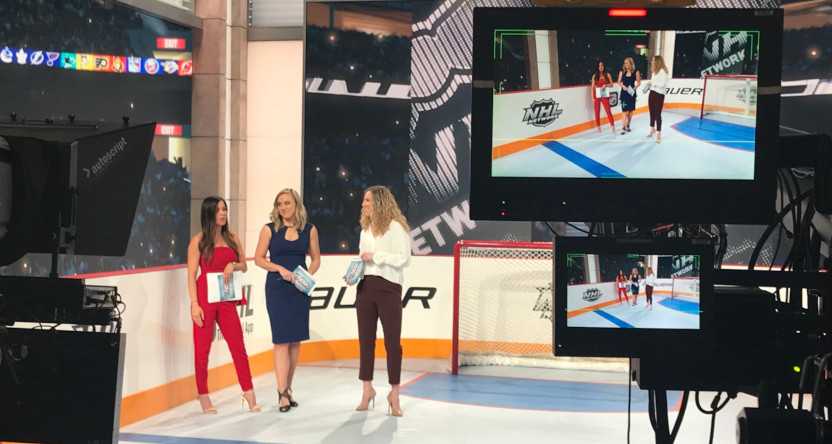 For the fourth straight year, NHL Network will be airing an all-female edition of their signature NHL Now show in celebration of International Women’s Day, with this one airing Monday at 4 p.m. Eastern. NHLN’s Jamie Hersch spoke to AA about that event in 2018 and 2019, and talked about how important it’s been as a way to make hockey broadcasts more inclusive. Here’s more on this year’s edition from a NHL release:

In celebration of International Women’s Day, NHL Network’s Jamie Hersch, Lauren Gardner, Jackie Redmond and Kendall Coyne Schofield will co-host the fourth annual all-female production of NHL Network’s daily show NHL Now™ on Monday, March 8 at 4 p.m. ET. Inspired by Hockey Is For Everyone™, a joint NHL and NHLPA initiative celebrating diversity and inclusion in hockey, the show will feature women across the sport of hockey providing analysis on the top NHL storylines, in-depth previews of the six games featured that night, and interaction with viewers via NHL Network’s social media platforms. 2018 Olympic gold medalist Alex Cavallini is also scheduled to join the program to discuss the Professional Women’s Hockey Players Association (PWHPA) and her participation in the 2021 Secret Dream Gap Tour games at the United Center on Saturday, March 6 and Sunday, March 7 in Chicago.

“We know that representation matters. If girls grow up seeing women talking about hockey, it becomes normal and they think, ‘I can do that someday, too.’ Whether it’s women or people of color, expanding the image of who boys, girls, women and men see as hockey broadcasters and analysts inherently helps to make our sport more inclusive,” says Jamie Hersch. “I’m honored to be a part of this show where we celebrate that inclusivity and prove that we can have a ‘normal’ NHL Now where the hosts and analysts all happen to be women.”

“My favorite part of this now annual tradition is that we approach it just like every other NHL Now,” says Jackie Redmond. “We’re still covering hockey. We just happen to all be women. I think it’s important that we treat it the same as we do every show, not like it’s some special occasion, because my hope is, that one day it won’t be.”

As per NHL Network, Lauren Jbara and Blake Bolden are set to join the program as well, and four female correspondents will be providing reports ahead of particular games: Christine Simpson on Montreal-Vancouver, Sarah McLellan on Vegas-Minnesota, Sonia Tydingco on St. Louis-San Jose, and Lyndsey Fry on Arizona-Colorado. Fry’s inclusion is particularly notable; a former U.S. Olympian, she joined the Coyotes in January as a radio analyst, and on Monday night, she’ll be an analyst on their TV broadcast on Fox Sports Arizona.

“I am very excited to serve as a TV color analyst for the Coyotes broadcast March 8 on FOX Sports Arizona,” said Fry. “International Women’s Day is about celebrating women’s achievements and raising awareness about women’s equality and I am very grateful to FOX Sports Arizona for providing me with this opportunity. Women like Sherry Ross, Kathryn Tappen, Christine Simpson, Cassie Campbell-Pascall, A.J. Mleczko, Cammi Granato, Kendall Coyne-Schofield and Caley Chelios have paved the way for female hockey announcers, and I am so proud to work for an organization like the Coyotes where diversity and inclusion are a top priority. I am looking forward to working with Jody Jackson, Matt McConnell, Tyson Nash and Todd Walsh.”

As part of the broadcast, Fry will provide insight and analysis throughout the game and will also be featured on the pre-game and post-game shows as well as both intermissions.

So it’s neat to see Fry spotlighted on NHL Network earlier that day as well. And that NHL Now broadcast will also include women in many of the production roles, including director, multiple producers, graphics, social media, and technical manager. It’s cool to see NHL Network sticking with this tradition of an all-female NHL Now show, and it helps to illustrate just how many women continue to play prominent roles in NHL coverage.

[Top image from the 2020 show, via Jackie Spiegel at The Sporting News]