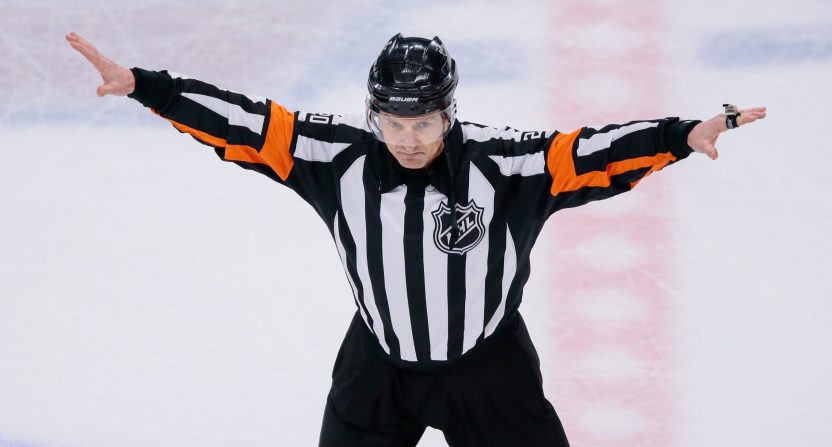 The NHL announced today that they are firing and banning referee Tim Peel in the wake of Peel after a hot mic incident on Tuesday night.

Officiating the Predators-Red Wings game, Peel was caught admitting that he’d been looking to call a penalty on Nashville, and the clip went viral immediately on Twitter.

Maybe if you're a mic'd up ref, you shouldn't express how you wanted to call a penalty against a team earlier in the game, changing how you ref the rest of the game.

"It wasn't much but I wanted to get a fuckin' penalty against Nashville early in the…"#Preds #LGRW pic.twitter.com/6fZImkdqLr

The NHL said they were looking into it, and today they announced that Peel was fired and banned from ever working in the NHL again.

National Hockey League Senior Executive Vice President of Hockey OperationsColin Campbell announced today that Referee Tim Peel, following his comments during the game last night between the Detroit Red Wings and Nashville Predators, no longer will be working NHL games now or in the future.

“Nothing is more important than ensuring the integrity of our game,” Campbell said. “Tim Peel’s conduct is in direct contradiction to the adherence to that cornerstone principle that we demand of our officials and that our fans, players, coaches and all those associated with our game expect and deserve. There is no justification for his comments, no matter the context or his intention, and the National Hockey League will take any and all steps necessary to protect the integrity our game.”

As many noted, Peel was a very experienced official, who was actually set to retire at the end of this season.

Tim Peel has officiated nearly 1,500 NHL games, including 90 in the playoffs and the 2014 Sochi Olympics. https://t.co/mWVnIEitIO

Plenty of the discourse has focused on hockey officials and their propensity for make-up calls, with some people defending Peel for just doing what every hockey official does. Which is true, to a certain extent! Hockey (and other sports) absolutely have officiating or umpiring issues, including make-up calls and other weird examples of the human element of officiating seeping into the actual athletic competition.

That’s an entirely separate issue, though. The league may want to change how games are officiated, but they might not, too. What they don’t want is any concrete evidence that it happens. The appearance of complete competitive integrity is much more important to leagues than whether or not it actually exists. That fans, players, and everyone else can tell officials insert themselves in this way in an effort to manage games is irrelevant as long as the league can maintain the illusion that it’s not happening or that it’s unavoidable.

Moments like this puncture that bubble, and that’s why the response was so swift. Obviously it would be better if it was accompanied by a strong review of officiating practices and a commitment to transparency, but if the NHL was actually interested in that, they would have done it already. Instead, Peel’s career ends a month or so early, and the NHL will presumably hope everyone forgets about it by the time the playoffs start.