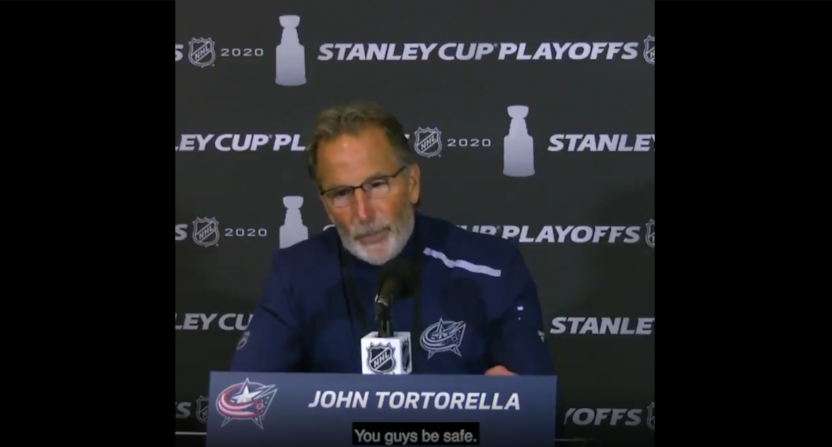 Columbus Blue Jackets’ coach John Tortorella has long been known for combative interactions with the media, but now one of those is going to hit him in the pocketbook. Tortorella held several short and terse press conferences during his team’s qualifying round (a 3-2 best-of-five series win over the Toronto Maple Leafs) and “first round” (a 4-1 best-of-seven series loss to the Tampa Bay Lightning) series, and the final one (after the Lightning eliminated the Blue Jackets with a 5-4 overtime victory in Game 5) last Wednesday has now led to a fine. Tortorella was previously fined $20,000 early in January for a post-game rant about the on-ice officials and the video review center in Toronto, and that fine carried a further $25,000 conditional penalty “in the event of a repeat episode between now and Dec. 29, 2020.” Well, the NHL determined Tuesday that Tortorella’s performance following Game 5, where he only took two questions, was “a repeat episode,” and they levied that $25,000 fine against him. Here’s more from their release:

Columbus Blue Jackets head coach John Tortorella has been fined $25,000 for his conduct during a media availability following Game 5 of the team’s First Round series against the Tampa Bay Lightning on Wednesday, Aug. 19, the National Hockey League announced today. The fine is the collection of a conditional fine assessed Jan. 1, 2020.

The fine money goes to the NHL Foundation.

And here is video of Tortorella’s “conduct” after Game 5, which includes him just saying “No, no, they had three shots” to a question about if the Blue Jackets had been playing the clock late in regulation, and has him also just going off and walking off after a question about what it had been like working with players in the bubble: “You know what, guys, I’m not going to get into the touchy-feely stuff and the moral victories and all that. You guys be safe.”

John Tortorella didn’t have much to say after Game 5. ? #NHLonSN pic.twitter.com/s4eUIDgNW2

This is not a new thing from Tortorella. As mentioned, he’s had clashes with the media throughout his coaching career (which has ranged from Tampa to New York to Vancouver to Columbus), especially during these kinds of post-game press conferences. And while his unnecessary brusqueness and repeated quick exits have led to some criticism for him, that sure hasn’t hurt his ability to get further NHL coaching jobs, or even media jobs with TSN.

But the press conference theater Tortorella has regularly performed doesn’t seem great for the NHL, the media who cover the league, or the fans who follow it. And it’s notable that Tortorella’s approach even goes beyond what the likes of San Antonio Spurs’ head coach Gregg Popovich have been criticized for. Yes, Popovich has made it clear that he hates in-game interviews and that he’s even lobbied to remove them, but there are many instances of him being quite kind to particular sideline reporters. And while Popovich’s post-game press conferences have also seen some stunts, they usually haven’t seen a quick exit. And Popovich has made it clear that he’ll address what he thinks are good questions, and he’ll be particularly hard on what he thinks are bad questions. His approach can still be criticized (and it still is), but there’s at least more logic to it than Tortorella flying off the handle after what seemed like a perfectly reasonable question, and an easy one to answer politely.

Of course, $25,000 isn’t that much for a NHL head coach, and no fine has ever deterred Tortorella before. And his poor behavior hasn’t kept him from getting further jobs or from getting award consideration; he’s currently a finalist for the Jack Adams Award, presented annually to the NHL coach “adjudged to have contributed the most to his team’s success” (with that adjudication coming from a poll of the National Hockey League Broadcasters Association at the end of the regular season). If he wins that shortly after being fined by the league, it could make for an interesting speech.