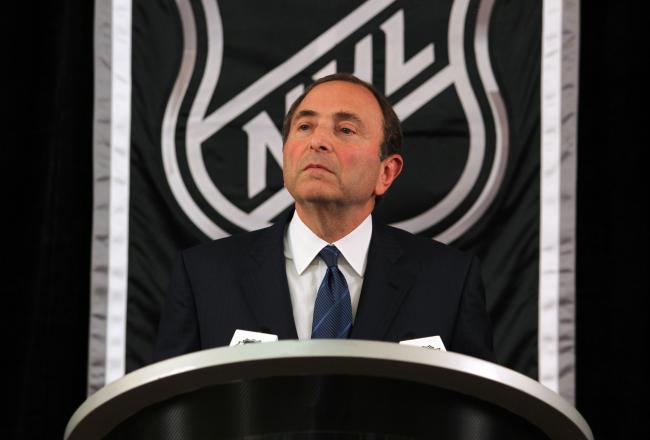 With the calendar turning to May, there’s still not much on in the way of actual live sports, although NASCAR and the UFC have both announced plans for events without fans later in the month. Other leagues are still mostly weighing their options, including neutral–site hubs. But an interesting element with discussions around the NHL and NBA is that even though their playoffs would normally be well underway by this point, commissioners Gary Bettman (seen above) and Adam Silver have repeatedly spoken about trying to finish at least part of their regular-season schedules. And while there are some possible competitive fairness reasons for that (any eventual playoff matchups may look quite different if further games are played versus if the standings at the time of the shutdown are used and the playoffs begin immediately), a bigger part of the picture still may be about the TV contracts, and particularly about the local TV contracts.

If the NBA and NHL decided just to end the 2019-20 regular seasons and move to immediate playoffs, there would obviously be some national broadcasting losses; NBC (on the NHL side) and ABC/ESPN and TNT (on the NBA side), to say nothing of the league networks, would lose (rather than just rescheduling) some of the inventory they had been planning to show. But those national rightsholders would get playoff content (which might come with higher ratings than normal thanks to captive sports-starved audiences, if the audiences for the NFL Draft and The Last Dance are any indication).

The bigger problems would come with the regional sports networks that have local deals with the different teams; those networks would be losing a lot more inventory (especially when you consider how many of them there are), they wouldn’t have much of a chance to make it up (RSNs do get some early-round NBA and NHL playoff games, but they don’t get to keep showing games through the playoffs), and perhaps most crucially, the regular-season games played wouldn’t hit the minimum number written into the RSN/team contracts (which appears to usually be 70 games). And that could lead to some big problems. There have even been some discussions, notably from Matthew Sekeres (a sports radio host on Vancouver, B.C.’s The Team 1040), that not hitting those minimums could lead to contracts rolling over (specifically with Sinclair, which bought the “Fox” branded regional sports networks last May) and to networks not paying for the next season:

Failure to do so comes with a severe penalty: the deals roll over to next season at no cost to Fox. So, those teams would face no regional TV revenue, which would in turn hurt hockey-related revenue (HRR) for the whole league.

Of course, it’s not 100 percent assured that this would actually result in a zero-cost rollover. A lot would depend on the specifics of the contracts involved, particularly their force majeure clauses and their prescribed remedies for not hitting guarantees. And most of the other discussion on this hasn’t specifically mentioned zero-cost rollovers. But it does seem clear that there will likely be some significant financial consequences for teams if they don’t provide that guaranteed number of games to RSN. For example, here’s what ESPN’s Brian Windhorst said about this on his podcast in March when it comes to the NBA (via Sam Amico at SI.com):

“What they would love to do is to get to 70 games,” Windhorst said on his podcast. “And the reason is it’s 70 is a key number is because that is what the deliverable is to the regional sports networks. They are promised 70 games.”

Most teams had played in the neighborhood of 65 games at the time of last week’s decision to suspend the schedule.

“Now, just because a team like the Lakers, for example, to get to 70 games … they wouldn’t necessarily be able to deliver on that because they’ve had a lot of national games,” Windhorst said. “But getting to 70 would be helpful in retaining revenue because they wouldn’t have to refund some to the local TV.”

The case of refunding some money to the local RSNs for playing 60ish games there instead of 70 seems like perhaps a more probable outcome than rolling over contracts at zero cost, and it’s possible that even hypothetical contracts that specifically say “roll over at zero cost” could wind up with this kind of resolution based off a settlement, legal action or more. But even refunding some money here would still be a tough outcome for teams; they still have a lot of costs and don’t have much revenue coming in.

It’s also worth considering that the RSNs may be highly motivated to push teams for whatever they can get, as they’ll face their own challenges if they don’t hit the minimum guaranteed games they told pay-TV providers they’d supply. Consider these comments from sports media industry consultant Lee Berke to Scott Soshnick (then of Bloomberg, now of Penske Media) in March:

“You’ve never had three major leagues that provide content all shutting down at once,” said Lee Berke, a sports-media industry consultant. “Ultimately, you’re going to get settlements done, and potentially refunds provided.”

…The most difficult discussions, Berke said, will involve regional sports networks, some of which carry teams from multiple leagues. While ESPN can air “SportsCenter” and specials, and dip into a trove of archives, RSNs have few options outside of classic games. RSN contracts with cable operators usually call for a minimum number of games and teams.

“If they’re not hitting those minimums, there are going to be serious discussions,” Berke said.

And that’s a growing conversation not just from providers, but from consumers and consumer advocates demanding refunds for the sports funds TV subscribers are paying without receiving live games. We’ve seen a fair bit of that discussion with the ESPN networks, and it’s perhaps even more protracted with the RSNs (ESPN has still showing some content a lot of people want to watch, especially the NFL Draft and The Last Dance). And that may intensify as time without sports goes on, especially if the RSNs don’t eventually get the games they guaranteed to providers.

So finishing out the 2019-20 regular season (in some way, to a point where leagues hit at least those minimum-game guarantees) is of key importance to both the teams (particularly given those local TV deals) and to the RSNs (particularly given their contracts with pay-TV providers). And that means there will be a strong push to do that ahead of any playoffs, even as the calendar keeps ticking onwards. It’s not necessarily inevitable that there will be more regular-season games (events like lockouts have led to shorter seasons than guaranteed before), but the regional TV deals are a big reason why these leagues haven’t just turned the page to focus on playoffs.