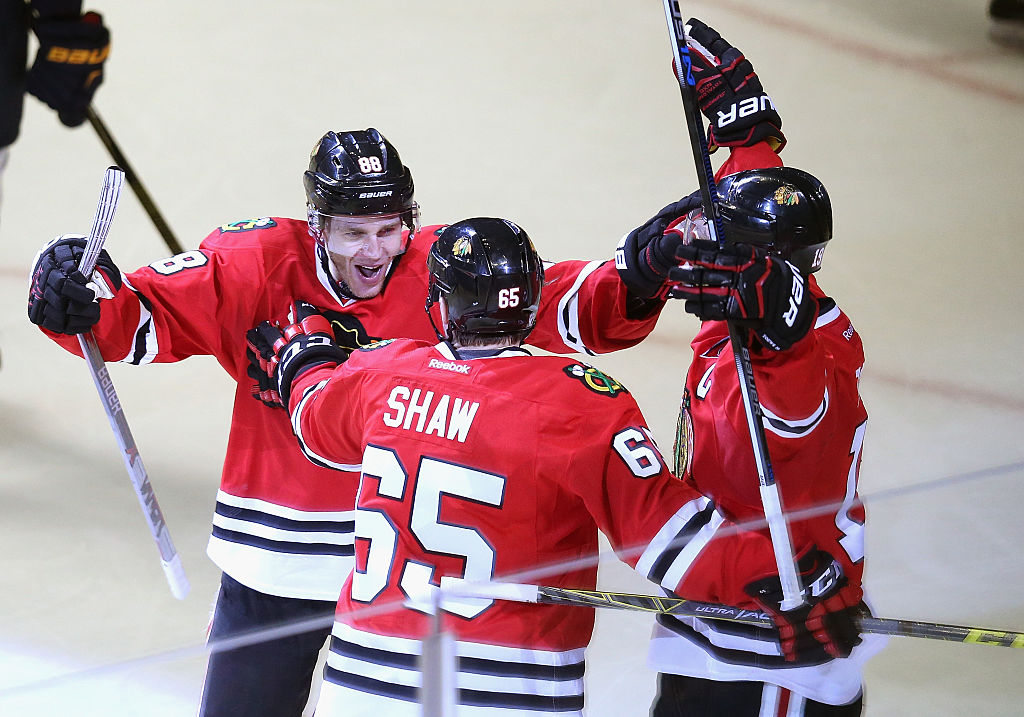 NHL fans are notoriously sensitive about the sport they love, and particularly why it isn’t a major television draw. This past postseason, the formula should have produced success. Most of the teams NBC loves were in the 16 team draw, there were no Canadian teams to sap ratings (which may never going to happen again), and plenty of the teams that create buzz had the potential to go deep. But, the overall ratings for the playoffs were down 14% from last year and 15% from 2014. NBC and the NHL looked gobsmacked to see what had happened to their momentum from previous years as it seemed that momentum was unstoppable. Then you see what they do in the regular season…

Instead of promoting teams such as Nashville, Tampa Bay, and others who made deep playoff runs this past season (and likely will do so again), NBC decides to ride and die with the teams that have made its ratings bed over the past eight years: the Blackhawks are on national TV 21 times, the Flyers 20, the Bruins 17, and the Rangers 15. Three of those teams went out in the first round of the playoffs last year, and one of them didn’t make them at all (sorry, Boston). The last two #1 overall draft picks, including a player from Arizona, will be on US national TV once this season combined. NBC’s plan to fix ratings woes not only in the regular season but the playoffs seems to be: more of the same, and cross your fingers.

This formula has worked in the past eight years because those teams, plus others like the Penguins, Red Wings, Kings, and Capitals, have all been league powerhouses. Recent Stanley Cup Finals have been Red Wings-Penguins (twice), Blackhawks-Flyers, Blackhawks-Bruins, and Kings-Rangers, all of which are appealing to fans both diehard and casual and consist of big markets, big teams, and big hockey fanbases.

But as the NHL’s ever-present parity takes its toll on all of those teams, none of them seem to be major Stanley Cup contenders next season outside of the Penguins, and their presence didn’t do much to help ratings against the Sharks last year. It does make sense for NBC to use this formula because it has worked, though largely out of convenience and because the teams in question were really good. And after teams make 11 national TV appearances, any national games beyond that are blacked out locally, bringing forward diminishing ratings returns. So what can NBC and the NHL do to grease the ratings wheels for the playoffs besides praying the Blackhawks magically become a powerhouse again?

Nashville is a Stanley Cup contending team with an eminently marketable star in PK Subban, and they’re on NBCSN twice – once in October and once in April. That’s ridiculous. Obviously Nashville is not the market Chicago or New York is, but when their ratings don’t stack up in April and May, it’s not because they aren’t a compelling team. Casual hockey fans don’t know much about them because they don’t see them enough to attach names and narratives to the. Whether you show them against Chicago, Minnesota, Detroit, or even Edmonton, they need to be on TV before the postseason so casual fans can latch onto them.

Three of last year’s division winners, Dallas, Anaheim, and Florida, are on national TV a combined seven times. Seven! In what other sport would that even be possible? Two of them are legitimate contenders again this season, and that they won’t be on a third as much as the Blackhawks is insanity. At a point, it doesn’t matter who you put them on against, just that you put them on at all. It seems fairly routine and simple to show up-and-coming teams more, but NBC never seems to actually do it, and it ends up biting them come playoff time.

Outside of “NHL Top 10”, there is no shoulder programming on NBCSN at all for the NHL. No analysis shows, no nightly recaps, no hot stove type shows, no nothing. If an NHL fan wants that analysis, they need to go to NHL Network, Canada, or the internet. The only cable sports network with a financial stake in the league doesn’t show any shoulder programming to boost the brand and viewership for the weekly game offerings. NBCSN does more with the Premier League, NFL, and NASCAR, and it’s no shock the ratings for those properties are still increasing. Maybe a nightly highlights show isn’t feasible, but a weekly highlights show? A show with insiders and journalists talking about the issues surrounding the game? Anything?

This won’t happen, but both MLB and the NBA to an extent allow local-national co-exists for nationally televised games, offering at least a marginal ratings bump. A Chicago-Montreal game that’s blacked out in Chicago isn’t going to do much anyway, but putting the broadcast on NBCSN in Chicago even if it’s the same broadcast (we’ll get to that) will give at least a slight bump to the ratings. For team appearances that go beyond the max of 11 on NBC/NBCSN, let the two productions co-exist in the local market and though many will watch the local feed, the small bump in ratings might make a small difference.

NBCSN will often simulcast local productions from Philadelphia, Chicago, and sometimes Washington, thanks to the Comcast SportsNet connections. While this does keep costs down and is logical in that sense, fans of a team like the Islanders watching their team play the Flyers aren’t going to be pleased to see a national game called by the Flyers local broadcasters. NBCSN sometimes also takes local broadcasters, particularly from the Sharks, for their games on the network, again, out of convenience and cost cutting. That turns casual fans off and only angers the die-hards who are the bread and butter of your ratings base that might watch other games on your network. This is also true in the playoffs, even if its only a bigger problem for out of market fans.

The NHL’s marketing campaigns recently have been focused on teams being the stars, not the individuals. As the NBA has proven, stars sell, and sell big. Obviously, Patrick Kane isn’t Steph Curry, but on teams where the team alone won’t carry ratings, how about marketing the stars instead? Jamie Benn with Dallas, P.K Subban with Nashville, Steven Stamkos with Tampa Bay, Vladimir Tarasenko with St. Louis all could become faces of the NHL on NBC. Again, this seems simple but somehow eludes NBC’s grasp every single season. Sure the Edmonton Oilers or Toronto Maple Leafs don’t have much cache in the States, but maybe Connor McDavid and Auston Matthews would.

The NHL suffers from the same issues that MLB and, to a lesser extent, the NBA suffers from: it is a hyper-regional focused sport, with fewer markets of insane local interest than MLB has. While many of its ratings winners will still be playoff contenders this upcoming season, the odds of another Blackhawks-Bruins final or even a Blackhawks-Rangers edition seems incredibly slim. Instead of acting surprised when ratings aren’t up to par for a Predators-Sharks Western Conference Final, show these teams more instead and promote their players to all audiences. Casual hockey fans are interested in the NHL’s “original six”, but there are teams and players beyond those teams and the few others that NBC loves.

While going back in time and changing the NHL’s now monolithic TV contract with NBC isn’t possible, the Peacock Network and the league can fix some of their ratings woes with simple tweaks to their schedule and programming that seem obvious, yet so far out of the realm of possibility that it’s a bit sad.

Unless changes are made, the story for NBC will continue to be the same when it comes to sagging NHL ratings. And they only have themselves to blame.