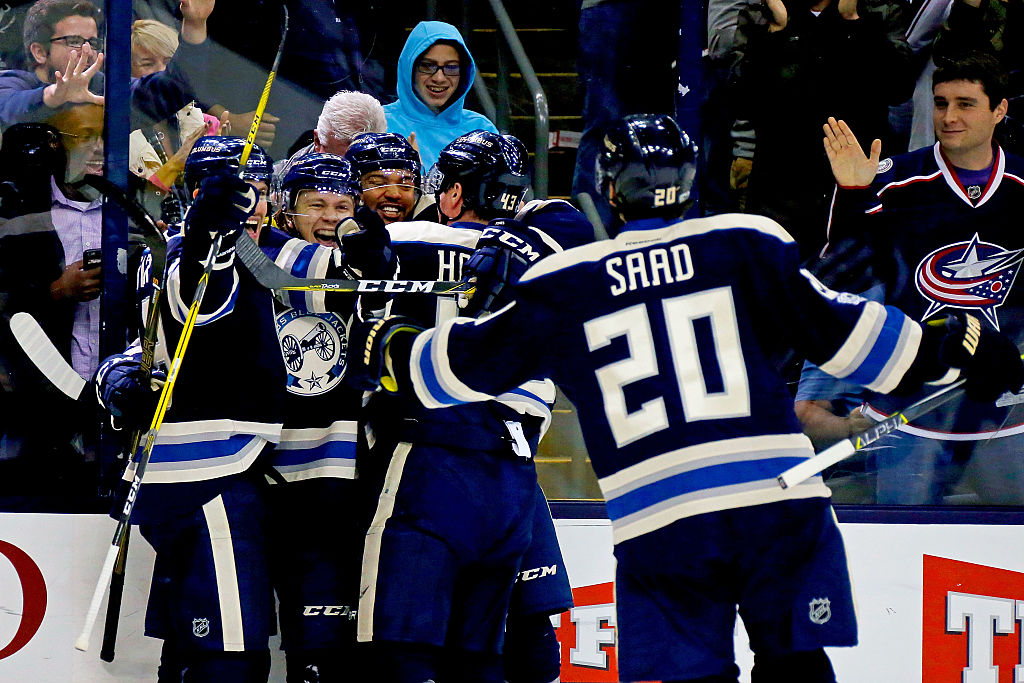 Last night around 6 PM ET, NBC issued a press release saying that NBCSN would broadcast Saturday night’s Blue Jackets-Rangers game. This would be the game where the CBJ would theoretically attempt to break the all-time NHL winning streak record of 18 games. However, NBC would only televise the game if the Blue Jackets beat the Washington Capitals on Thursday night to tie the all-time record of 17 wins in a row set by the 1992-1993 Pittsburgh Penguins team.

Here was the network’s release:

If the Columbus Blue Jackets defeat the Washington Capitals tonight, NBCSN will televise Columbus’ attempt to set the NHL record for most consecutive wins this Saturday at 7 p.m. ET when they host the New York Rangers.

Unfortunately for fans of history-making sporting events, that is not going to happen. The Capitals ended the CBJ’s winning streak at 16 games on Thursday night, crushing them in a blowout victory.

No record winning streak. No special NBCSN broadcast. No national television for the team with the most points in the NHL.

While the “NBC Press Release Jinx” may now be a thing, it does expose the bigger issue facing the NHL and NBC.

Do you know how many Columbus Blue Jackets games NBC aired during their 16 game winning streak? Zero. Zilch. Nada. Nothing. The Jackets did something that only one other team in NHL history has ever done, and the NHL’s national television outlet was nowhere to be seen aside from very limited “bonus coverage.”

Part of it is just the luck of the draw and timing. Nobody could have ever expected Columbus to win 16 games in a row or be at the top of the standings at this point in the season. It was expected that the Jackets could make the jump next season into the upper echelon of the league and they lost their first 7 games. This is a franchise that hasn’t even won a playoff series in their near 20 year history and only been to the playoffs twice.

But another part of it is that NBC and the NHL are entirely dependent upon major-market traditional powers for their national television schedule. This is a reality that faces every pro sports league that isn’t the NFL. There’s a reason why MLB shows 93 Yankees-Red Sox games every year and why teams like the Cubs and Dodgers are on national television. The same thing is true in the NBA with the Lakers and Knicks always getting games on TNT or ESPN even though their records are abysmal and the Warriors and Cavaliers seemingly on every other night.

For the NHL, you’re going to get a heavy dose of Original Six teams and other traditional eastern conference teams in good hockey markets like the Penguins, Flyers, and Sabres. You’re not going to see a lot of the Coyotes, Blue Jackets, Panthers, and others.

If the Blue Jackets continue to have a great season and stay at or near the top of the Eastern Conference standings, maybe they’ll get another game or two flexed onto NBCSN. But in all likelihood, it still won’t be in the same neighborhood as the likes of the Bruins, Penguins, or Blackhawks.

And therein lies the dilemma facing the NHL and NBC. The Blue Jackets are not a ratings draw, at least not now. They don’t have the history or the national following or the tradition of winning. That’s why they’ve never been heavily featured on national television. It’d be tough for the casual sports fan to name too many people on the roster, maybe even including stars like Sergei Bobrovsky, Cam Atkinson, or Nick Foligno.

But in order for them to gain a following and become a ratings draw and for those players to become household names… they need to be featured on national television.

The second longest winning streak in NHL history would have been a great place to start with showcasing the Columbus Blue Jackets, but instead it will go down as a missed opportunity for the league to really market one of the great stories of the season. The NHL and NBC need to take a deep look and ask themselves whether it’s worth the risk of lower ratings in the short-term to make gains in the long-term and spread the love to teams between Buffalo and Los Angeles.