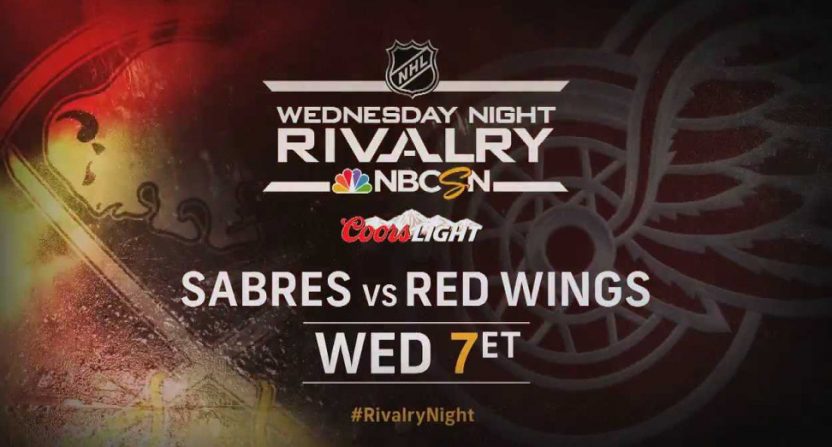 One of the long-standing complaints about sports coverage involves broadcasters focusing on athletes or teams that are popular. In individual sports, that leads to criticism of things like how often golf broadcasters show Tiger Woods (never mind the compelling evidence of what he means to the ratings), and in team sports, that leads to complaints about decisions like how national MLB broadcasts often choose Yankees-Red Sox games (despite how those tend to outperform other matchups), or how ESPN and TNT’s NBA broadcasts don’t cover teams like the Toronto Raptors, or how NBC tends to feature big Premier League matchups (despite the trend of those performing well), or how NBC’s NHL coverage tends to focus on certain prominent teams and ignore smaller-market teams, West Coast teams and Canadian teams.

Well, NBC has taken note of some of those criticisms in their plans for the 2018-19 season. They announced those Monday, and their new approach will see the end of the Wednesday Night Rivalry NBCSN brand (often an excuse to showcase popular teams, even when the “rivalry” in question was slim to non-existent, as with the Sabres-Red Wings one illustrated above) and the spotlighting of many more small-market, West Coast and Canadian teams. They’ve also left the last week of the season very open to focus on whatever games wind up mattering for the playoff hunt. Here’s more from their release:

NBC Sports is scheduled to present 109 NHL regular-season games during the 2018-19 season – its most since acquiring NHL rights prior to the 2005-06 season. Coverage begins Wednesday, Oct. 3, at 7:30 p.m. ET on NBCSN, when Alex Ovechkin and the Stanley Cup champion Washington Capitals raise their championship banner to the rafters and host the Boston Bruins. All games will be streamed live on NBCSports.com and the NBC Sports app to authenticated users via TV Everywhere.

NBC Sports’ 2018-19 NHL schedule is highlighted by the debut of “Wednesday Night Hockey” on NBCSN, which will showcase the network’s most diverse schedule since it acquired NHL rights prior to the 2005-06 season, as well as NHL’s current and rising stars.

…“With the impressive growth of fan interest in non-traditional NHL markets combined with the emergence of a number of rising stars, we felt the time was right to broaden our Wednesday night schedule and evolve the brand,” said Sam Flood, Executive Producer & President, Production, NBC Sports and NBCSN. “Fans will still see plenty of games between traditional powers, but our new approach to Wednesday nights – including a record number of doubleheaders – allows us to show more rising stars and more Western Conference and Canadian teams than ever before.”

This is an interesting shift in approach, especially considering what NBC Sports president of programming Jon Miller told AA about scheduling back in October 2015:

“We try to be very balanced, we try to showcase as many teams as we can,” he said. “Clearly, the teams that perform very well both on the ice and in the ratings are going to be the clubs that get the majority of the attention. That’s just the nature of the beast. It’s a business for us, and they understand that. We encourage these teams to invest and get better and when they do, they’re rewarded with more exposure.”

Miller said market size and a team’s popularity is always going to be a factor, but winning can help a lot in boosting a team’s profile as a candidate for prime-time games.

“I certainly think that helps,” he said. “The big markets obviously drive a lot of value, but it’s kind of like Green Bay in the NFL; they’re a small market, but when they’re on TV, they deliver big ratings. So some of these small market teams, if they do well, they’re still going to get good exposure. I think we’ve done a good job and we’re very balanced, the way we should be to get every team on our air.”

At that time, Miller also talked about how great the Wednesday Night Rivalry approach had been:

“It’s been wonderful,” he said. “Wednesday Night Rivalry is really a creation of [NHL on NBC executive producer] Sam Flood and the league, and it’s turned out to be this great thing. People know that every Wednesday night from the middle of October to the middle of April, you’re going to get a great hockey game on Wednesday night with two teams that hate each other. As they like to say, ‘Hate sells,” and nothing could be more indicative of that than the numbers we’ve had for those Wednesday night games.”

The thing is, though, there are only certain numbers of actual rivalries in the NHL, and that led to many of the NBC matchups being mocked for not being a real rivalry. So Wednesday Night Hockey feels like a much better branding fit on that front, as it allows them to show whatever game seems most compelling without worrying about if the teams involved have history or not. And it’s also particularly interesting that this will now see NBC showing some all-Canadian matchups, such as Toronto-Winnipeg on Oct. 24. Most national sports broadcast ratings usually are boosted by strong local market numbers, which is why broadcasters prefer bigger markets, but a game like that has no local market that counts for U.S. ratings. But it does have two top young NHL stars in the Leafs’ Auston Matthews and the Jets’ Patrik Laine, and NBC is clearly betting that the star power will help compensate for the lack of local ratings.

And what’s really so notable here is how much of a contrast this is to most other sports’ big national broadcasts. Fans of small-market or Canadian teams in every sport (and sometimes even those teams’ executives) have long complained about not getting what they see as their fair share of attention on national U.S. TV broadcasts, but those complaints haven’t often led to much. And that’s totally understandable from the broadcasters’ side; a notable example is ESPN’s Sunday Night Baseball, where there’s been a ton of complaining over the years about how often the Yankees and Red Sox are shown, but where Yankees and Red Sox games tend to massively outdraw other teams. So it’s fascinating that NBC is listening to the complaints and shifting to feature teams that haven’t historically drawn as well.

That seems to indicate a belief that star players will draw ratings regardless of who they play for, especially with the Canadian teams. And while it’s not a belief that’s common across all sports, there is some data to support it in certain cases; for example, in the NBA, the Oklahoma City Thunder have received much better scheduling slots and performed much better in those slots than you might expect from a team in the 41st-largest U.S. TV market. That’s because the NBA has managed to get neutral fans to watch many of its primetime games for the star players and playoff implications involved, and the NHL and NBC are trying something similar here. Will it work? We’ll find out. But it’s fascinating that NBC has listened to the criticisms of the Wednesday Night Rivalry approach, and gone to a much wider swathe of teams and an approach more focused on stars than team locations. We’ll see how that goes for them.