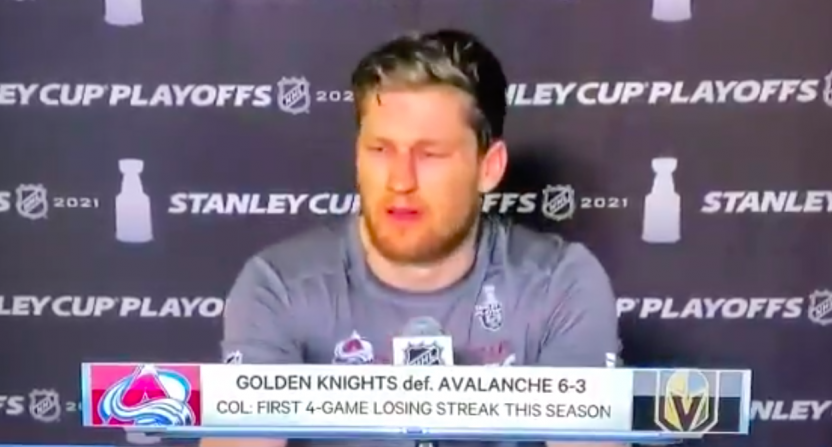 The Colorado Avalanche suffered a crushing defeat on Thursday night, losing 6-3 to the Vegas Golden Knights in Game 6 of their Stanley Cup playoff series. The Knights won the series 4-2 and moved on to the semifinals, while the Avs’ season ended in disappointment. Given that they came into the playoffs with the best regular-season record in the NHL, it’s hard for Colorado not to see this as a major failure of potential.

You certainly don’t need to tell Nathan MacKinnon, the 8-year veteran who has been a part of multiple Avalanche squads that have fallen short in the playoffs in recent years. During the post-game presser, the center spoke pretty plainly about his frustrations.

Full MacKinnon quote from question by @MikeChambers about #Avalanche window and next year: pic.twitter.com/pnEG8rEz8Y

MacKinnon certainly wasn’t in the mood to mess around during the press conference. So when Adrian Dater of Colorado Hockey News offered up a fairly bizarre question, complete with profanity included, it would not have been surprising for MacKinnon to blow up or simply walk away. Instead, he allowed the confusion to wash over him just like it did for those of us listening from home, and answered simply and honestly.

Dater: “I’m just thinking out loud in your shoes right now: alright we’ve done all we can do, we’ve done all the game planning, maybe just…fuck it, we’ll go in next year and not think and just win this thing when we don’t think that much. Am I on the right path at all with this? Like maybe this guy’s thinking too much?”

As you might imagine, there was some criticism and confusion from other media members in the hockey world and beyond.

I have started muting zoom when it’s not my turn because I physically cannot take the questions some people ask, it physically pains me. and WOW I want to actually die after hearing this. https://t.co/6paqDTt29s

Oh my God. That's so incredibly unprofessional. Who asked that question? https://t.co/2wRF3FLUrq

Those outside Colorado might remember Dater for when he was fired by the Denver Post in 2014 following a pattern of events that included offensive behavior, profane tirades, and the harassment of a female hockey fan on social media. Dater attributed his problems to substance abuse and depression at the time. We wrote about Dater’s attempts to rehabilitate his image and career a few years back as well.