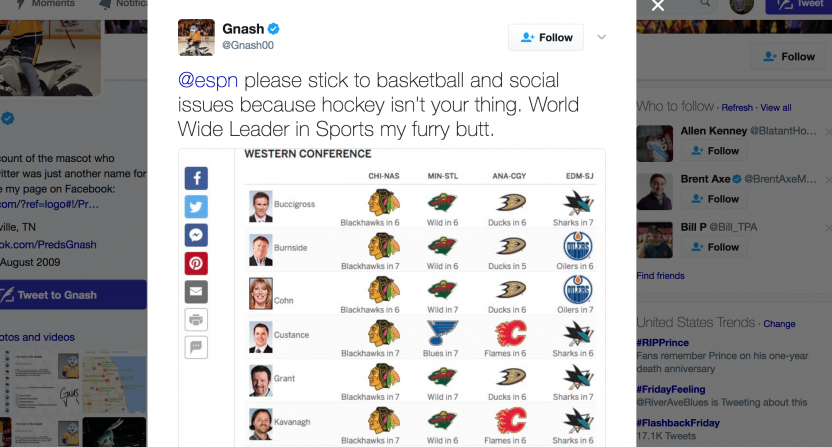 The Nashville Predators just completed a first-round sweep of the Chicago Blackhawks that no one saw coming.

And by “no one,” we mean ESPN’s panel of NHL playoff prognosticators, who unanimously picked the Blackhawks to beat the Predators.

Well after Nashville’s series-clinching win Thursday night, the team’s official Twitter account made sure to remind ESPN of its errant predictions.

The Predators’ account went easy on ESPN compared to the team’s mascot, Gnash, who told the network to “stick to basketball and social issues because hockey isn’t your thing,” and lamented, “Worldwide Leader in Sports my furry butt.”

Between the dig at ESPN for being too political and the invocation of his derriere, Gnash really let ESPN have it there.

Meanwhile over at Yahoo, writers were near-unanimous in picking the Blackhawks over the Predators, with one brave exception: Greg Wyshynski.

This correct pick earned Wyshynski a shoutout from Gnash.

You have earned my respect @wyshynski https://t.co/ceq1j0q1Ue

For what it’s worth, Sports Illustrated correctly predicted a Predators upset, as did one of three USA Today forecasters. Everyone else we can find had the Blackhawks winning the series.

In the next round, Nashville will play either St. Louis or Minnesota. Media outlets should probably make sure at least someone picks the Predators, lest they again feel the wrath of Gnash.