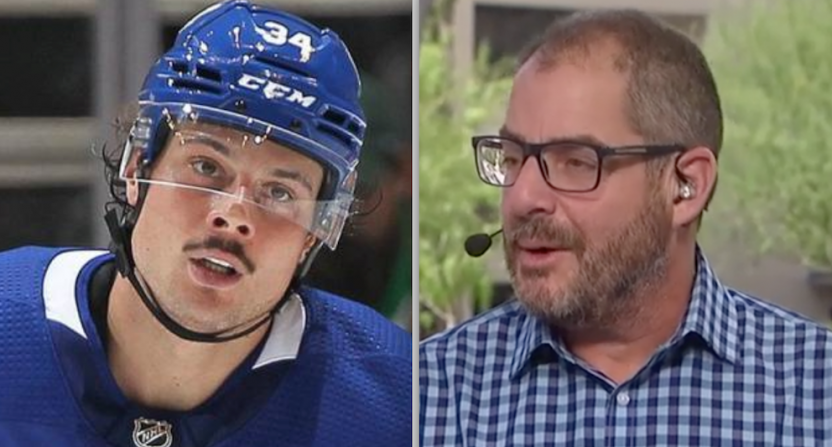 The NHL joined the NBA this past weekend in resuming its 2019-20 season with an eye on finishing the campaign and determining a champion. Along with Major League Baseball, MLS, and the WNBA, the TV sports schedule is suddenly filling up again.

Pro hockey dropped the puck on Saturday (Aug. 1) with round-robin tournaments in each conference to line up the top four playoff seeds and best-of-five series among the remaining eight teams to fill the final four postseason spots. (Here’s a look at the format, via ESPN.)

In one of the Stanley Cup Qualifiers, the Columbus Blue Jackets opened with a 2-0 win over the Toronto Maple Leafs. But from a sports media standpoint, there was some drama during the postgame press conference when Toronto’s Auston Matthews didn’t like getting a question from reporter Steve Simmons. The Athletic’s James Mirtle referenced the exchange on Twitter.

Auston Matthews says to Steve Simmons when he asks a question that he doesn't appreciate a question from him and found his article about his positive test unethical.

At issue was Simmons reporting in the Toronto Sun in mid-June that Matthews had tested positive for COVID-19 in Arizona. Neither Matthews nor the Maple Leafs had revealed the positive test, but that development became public with Simmons’ report.

Here is Auston Matthews taking a question from Steve Simmons and owning him.

So when Simmons announced himself and asked a question to Matthews about facing the tight Columbus defense, the young star took the opportunity to scold the veteran reporter.

“First of all, it’s unfortunate I’m getting a question from you at this point, Steve,” said Matthews. “I just wanted to say that I didn’t appreciate the article you wrote about me a couple of months ago. I thought it was a bit unethical, to be honest.” Matthews then went on to answer Simmons’ question.

For the record, I have no problem with what Auston Matthews said tonight. He's not a journalist. He's a pro athlete. If we weren't in this COVID situation, I'm sure we would have had the conversation face to face long before this.

Whether you think Simmons violated Matthews’ privacy might depend on your view of the media and its role in reporting news. Is it Simmons’ job to protect Matthews’ medical confidentiality? Or is he doing what he should do as a reporter by relaying information he’s learned to readers?

Someone tipped Simmons off to Matthews’ positive result and his report says two NHL sources confirmed the test results. So it wasn’t being kept a secret, despite what Matthews or the Maple Leafs may have preferred to the contrary.

The larger issue is the lack of access that Simmons alludes to in his tweet. While he’s not complaining about not being able to talk to Matthews, per se, and very few — if any — are objecting to the distance currently maintained between reporters and athletes under COVID-19 safety protocols, it’s likely that this situation could have been resolved prior to Sunday’s postgame presser.

Simmons wrote that he did seek comment from Matthews and his agent before the report was published. So maybe Matthews just wasn’t going to give any confirmation. And, of course, he probably objected to the information being reported.

But if Simmons had been able to approach Matthews in the Leafs’ locker room while preparations for the NHL’s restart were underway, perhaps the conflict would’ve been resolved. At the very least, Simmons could have made his case and given Matthews the opportunity to confront him directly. Yet maybe Matthews would’ve preferred a more public setting to reprimand Simmons. We’ll never know.

Matthews claimed he was “moving along,” so this issue may be settled. But maybe it’s worth keeping an eye on Maple Leafs’ press conferences through the remainder of the NHL season and Stanley Cup Playoffs, just in case tensions arise again.