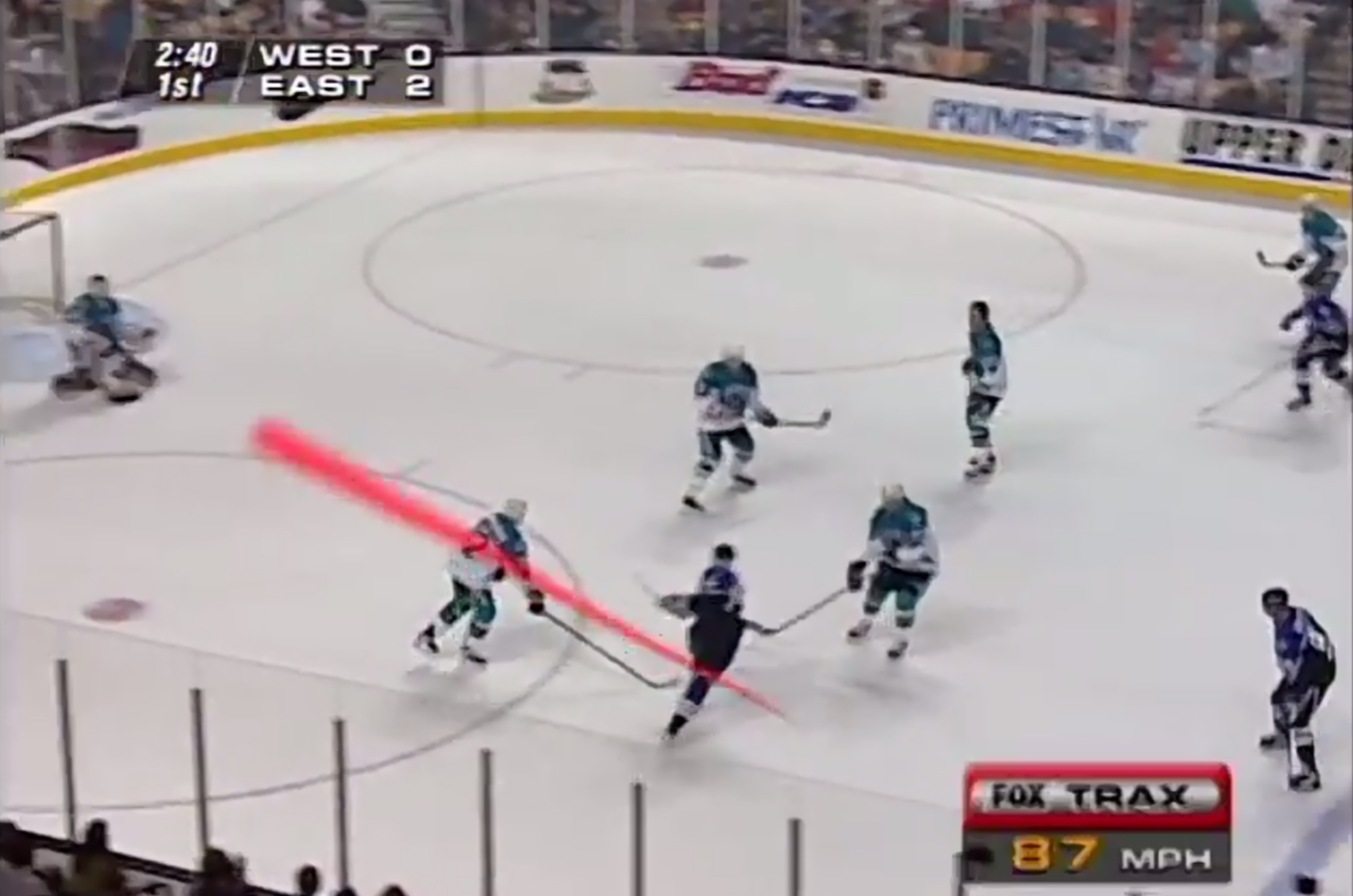 Fox hyped it as “the greatest technological breakthrough in the history of sports.” Hardcore hockey fans in Canada and the U.S. hated it. David Letterman also criticized it. What was it? It was the blue glowing puck that Fox used in its NHL coverage starting with the 1996 All-Star Game and lasted for two seasons. The puck on the screen was blue. To signify a slapshot, a red streak and a graphic of the shot’s speed was added. Those who developed the technology of the glowing puck still love it to this day.

In 1994, Fox signed a five-year deal with the NHL. Knowing that U.S. viewers had complained about seeing the puck on old school standard definition box televisions, Fox executives began working on the glowing puck. Sports Business Daily talked to several people who were part of the decision and development process.

Here’s Fox’s promo hyping the unveiling of the glowing puck:

And here are some highlights from the glowing puck’s debut at the 1996 NHL All-Star Game in Boston:

Some say the innovation was ahead of its time, but one of its drawbacks was when the puck was on the nearside boards, the blue glow would in the crowd causing some confusion. But over 20 years later, Fox Sports execs still swear by the idea.

We didn’t pay a fortune for it. But when you buy a property, you figure that you can get the ratings up and make some money on it. I thought one way to do this would be to make the puck glow because nobody could see the puck on television. The idea of making the puck glow had been talked about forever, and people told me that it would never work.

… I figured that if it works or doesn’t, at least it would pop the ratings so that when we went on air, we had a story to tell the advertisers.

NHL Commissioner Gary Bettman went along for the ride:

With Fox having just acquired the NHL’s rights, he was looking for a way to enhance what existing fans were seeing and find a way to introduce the fastest game on earth to people who might not have been hockey fans. I actually thought it had potential.

And as the debut of the puck at the All-Star Game got closer, Fox began to really hype it and Hill was getting excited:

If we can make the puck glow, it sells itself. There’s going to be haters, and everyone’s going to write about it. So we go to Boston to launch it at the All-Star Game. Suddenly, hockey’s hot. There’s journalists everywhere. I thought to myself, this has paid off. I don’t care if it doesn’t work because at least the audience that we’re going to get for the first game will stay with it because it’s so much fun. And it worked! Although, it didn’t work very well, to be honest.

Bettman was there when the puck was turned on:

I remember Doc Emrick’s words. It was like launching a spaceship. “Now we’re going to engage the puck.” There was a moment in time where it was clear that they were throwing a switch and activating it. The All-Star Game did a big number for an All-Star Game in those days because people wanted to see what this was going to be like.

The game drew a 4.1 rating on Fox which at the time was the highest-rated NHL telecast in two decades. The puck drew negative reaction from Canadians and according to now-Fox Sports President Eric Shanks, even to the point where fans picketed outside a production truck in Montreal.

Overall, Fox spent over $2 million on the project, got a lot of publicity for the puck and those who helped developed it believe it helped to raise ratings. Hill said the NHL had its highest ratings during the Fox years, but the network was rewarded when the league sold its rights exclusively to ESPN.

Perhaps the technology was ahead of its time and if it debuted now, maybe the audience would be more open to the idea, but with NBC airing the games, its no-nonsense coverage means we won’t be seeing a glowing puck anytime too soon.