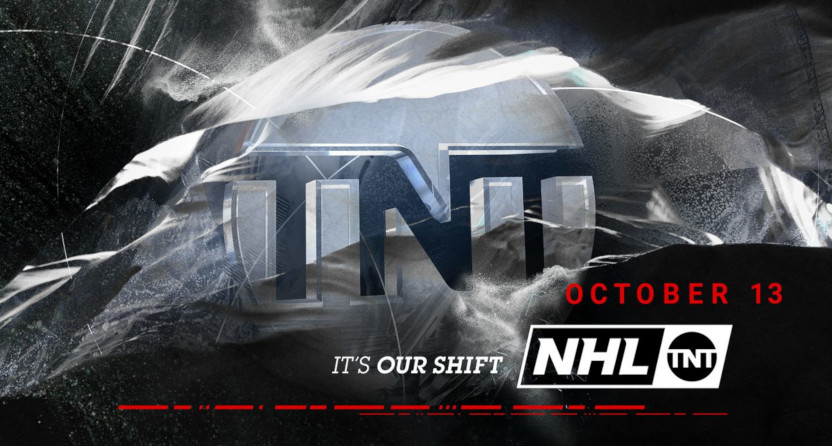 The NHL on TNT studio show retains two figures who were prominent on NBC’s NHL studio coverage, host Liam McHugh and analyst Anson Carter. But beyond the additions of new analysts Wayne Gretzky, Rick Tocchet, and Paul Bissonette, the show is going for a very different vibe, a looser, more conversational approach that can go more in depth on particular topics (and be more akin to Turner’s successful Inside The NBA). That was made clear on a NHL on TNT season preview conference call Wednesday, where McHugh told Joe Reedy of the Associated Press he’s excited for this new spot, and he thinks it will involve less “self-editing” than his previous role at NBC.

“I was at NBC for 10 years, and you get stuck in doing things a certain way,” McHugh said. “I’m proud of a lot of the work that we did there and a lot of the people that we worked with. I definitely treasure those moments and I’ll try to use them going forward in the future.”

“But when I got down here, and it was  just sitting at the desk and seeing what worked and seeing if I would work here, one of the things that really appealed to me was that it didn’t feel like I was taking my skills and trying to wedge them into a job that maybe I didn’t fit. It felt like they wanted me to do what I do best, which is interact, and to keep a loose show, but then to be able to transition. If something happens in a game and it’s serious and we need to talk about it, I can make that turn.”

“And the idea was if in the past, and it definitely occurred, I self-edited or I held back at times, in most cases that’s gone. If I find that it’s interesting, intriguing, even if we’re going off the rails, I may not drive this train off the rails, but if we’re off the rails and the view’s a lot more interesting, we’ll stay off the rails, I’ll keep it there for a while. That was something that really appealed to me, it was more natural to me.”

He said so far, it’s been easy to settle in to working for Turner Sports.

“So for me, the transition to this, even though it’s new; we’ve talked about this, it’s like the first day at school, everything’s different. This part feels good, the guys behind the scenes have been so helpful. It feels right, it feels natural. The only difference is trying to find my way on to the set, and if we’re on the set, ‘How quick can I run to the bathroom and be back before commercial ends?'”‘

McHugh then threw that question to Carter.

“Anson, I know you were with me at NBC for a while, and we’ve talked about this privately, but there’s just a level of energy and excitement here because of really a Turner vibe that we can bring to hockey.”

And Carter said he’s also seen notable changes, including more interactions with production staff, and he thinks that will give him some new angles to approach on air.

“I’ve noticed a big difference already too. Because at NBC, a lot of times, we would have our production meeting, a few of us, and then we wouldn’t see anyone until we got on the set. And here, it’s that family vibe where everyone interacts in the clubhouse there. And I know from listening to the conversations [with production staffers] and having everyone in the room, as I approach the games, I’ll approach it differently. Because now I can go to Winnie, who’s cutting tape with someone back there, and go ‘Hey, what did you think? What stuck out to you that period?'”

“Because I see things that I might not think that the casual fan has a question about, or vice versa, so when I can go to people in the room and say ‘What did you think of that period? Did anything stand out? Do you have any questions about that period?’ And then we can come on the set and break it down. And it might be something that a casual fan out there says ‘Wow, I was thinking exactly the same thing,’ whereas if I’m watching the game as a quote-unquote ‘experienced professional,’ I might think that everyone should see that, even if that’s not the case.”

McHugh then said “I think we’ve all embraced the idea that change is good, and change has the potential to be great, and we can attack things from different angles.”

Later in the conference call, McHugh was asked to go into more detail on that past self-editing, and he said a lot of it was in trying to stick to a NBC format that wanted to highlight Xs and Os over personalities and hit a lot of topics quickly in many intermissions and post-game shows.

“In general, the idea was we had a show, we had a format. We would go away from that format on occasion. But we would also at times, there were times where maybe the conversation could have drifted a little bit further, been, in my opinion, a little more entertaining and a little bit less about the Xs and Os of the hockey game and a little bit more about the personalities and the people. I’m not saying that was always the case, but it definitely did occur.”

“And that’s what interests me, personally, and I think it interests a lot of people at home. It doesn’t have to be every night, it doesn’t have to be every personality. But there are times, there’s a time and a place. And to me, I just felt like there were times where it was like ‘All right, we had a quick conversation about this, that’s it, we’re going to move on, we’re going to talk about the next thing that is on the agenda.'”

“It’s not a right or a wrong way, it’s just personal preference for me. I felt some of the more conversational elements of it suited what I do, and I’m hoping that’s what the fans want to see.”

Carter added that the difference already became notable in TNT’s first preseason game last week, where they had a list of potential topics but made it clear it was fine if they didn’t get to all of them. He said that allowed them to get more in depth on early topics.

“I think we noticed from the first game too. We had our rundown, we had five or six things that we were going to talk about, and we said on set, ‘If we get to the fifth or sixth thing, great, if we don’t, if we have this compelling conversation with the first two players we’re talking about, then so be it. We can always push that to later on in the post-game show or in the intermission.’ And some places, that isn’t the case, you have to hit every single thing on that rundown.”

Carter said he also feels like there isn’t pressure here for each analyst to contribute to each segment, and some segments may involve a deeper dive with one particular analyst.

And Gretzky added that he feels they’re all already working together as a team and not fighting for screen time, saying “No egos.”

The NHL on TNT team has already shown they’re willing to have some fun and push some boundaries, too, specifically with that segment Carter referenced where Tocchet demonstrated how players could kick opponents in the groin to stop cross-checking:

We start with Rick Tocchet suggesting players kick back with their skate into the nuts to stop the cross checking epidemic pic.twitter.com/hkcw3dwMix

McHugh said that showed off the fun approach this cast will bring, and it got noticed by some of his former colleagues as well.

“I did get a call from a few other analysts that I’ve worked with in the past that wondered why they weren’t allowed to kick me in the junk.”

The NHL on TNT’s regular-season coverage will begin with a New York Rangers-Washington Capitals and Chicago Blackhawks-Colorado Avalanche doubleheader on Wednesday, Oct. 13, with the first game at 7:30 p.m. Eastern and the second at 10 p.m. ET.