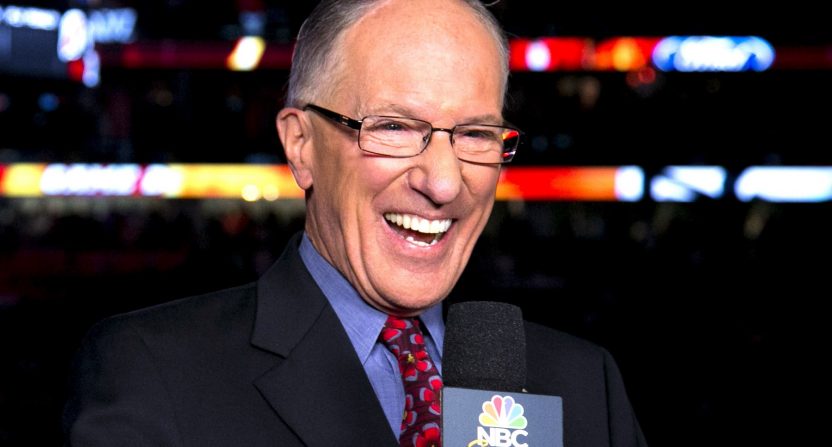 With a stacked sports calendar competing for sports fans’ attention, the Stanley Cup Final drew its lowest ratings in 13 years. As a whole, the Stanley Cup Playoffs had its lowest numbers since 2012, when NBC began airing all of the NHL’s postseason games.

Besides missing out on a restart and finish of the 2019-20 NHL campaign (successfully holding off COVID-19 with bubbles in Toronto and Edmonton), fans not tuning in also missed what ended up being the final season for legendary play-by-play broadcaster Mike “Doc” Emrick.

As first reported by the New York Post‘s Phil Mushnick, Emrick, 74, is retiring after nearly 50 years in broadcasting.

“I’ve just been extremely lucky for 50 years,” Emrick told Mushnick. “And NBC has been so good to me, especially during the pandemic, when I was allowed to work from home in a studio NBC created. Now, into my golden years, this just seemed to be the time that was right.”

As Emrick mentioned, he called games remotely once the NHL season restarted. That was a surprise to many viewers who said they couldn’t tell he wasn’t in the arena, nor alongside analyst Eddie Olczyk and reporter Pierre McGuire. What a testament to his talent and professionalism as a broadcaster.

Emrick’s career began calling minor league hockey in Port Huron, Michigan during the 1973 season. After four years in Port Huron followed by another three in Maine, he landed a NHL play-by-play gig with the New Jersey Devils in 1982.

He became the voice of the Philadelphia Flyers in 1986 (after filling in on play-by-play and providing studio analysis), also calling national games for ESPN, Fox, and ABC in addition to the 1992 Winter Olympics for CBS. Emrick returned to New Jersey in 1993, calling Devils broadcasts (including the team’s 1995 Stanley Cup championship run) until going national full-time with NBC Sports in 2011.

After 3,750+ Professional and Olympic hockey games, 100 different verbs used to describe a pass or shot, and 22 Stanley Cup Finals, the legendary Mike "Doc" Emrick has announced his retirement from broadcasting.

From hockey fans around the world, we say #ThankYouDoc! pic.twitter.com/Pt27Dp63TW

You may have noticed Emrick saying that he’ll occasionally record more essays for NBC while in retirement.

Emrick called 22 Stanley Cup Finals and six Winter Olympics during his career, earning eight Sports Emmy Awards for his broadcasting work. He was inducted into the Hockey Hall of Fame in 2008, honored with the Foster Hewitt Memorial Award for outstanding contributions to hockey broadcasting.

Though Emrick is largely known for hockey broadcasting, he called some NFL games for CBS in 1992 and 1993, paired with analysts Matt Millen and Hank Stram, respectively.

It’s difficult to imagine a NHL season without Emrick’s voice narrating the action (unless most of your hockey viewing is following your local team on regional telecasts). He’s been the national voice of hockey on NBC for nearly a generation, so good at capturing the building anticipation and excitement of key moments during a game. The game will certainly miss him.