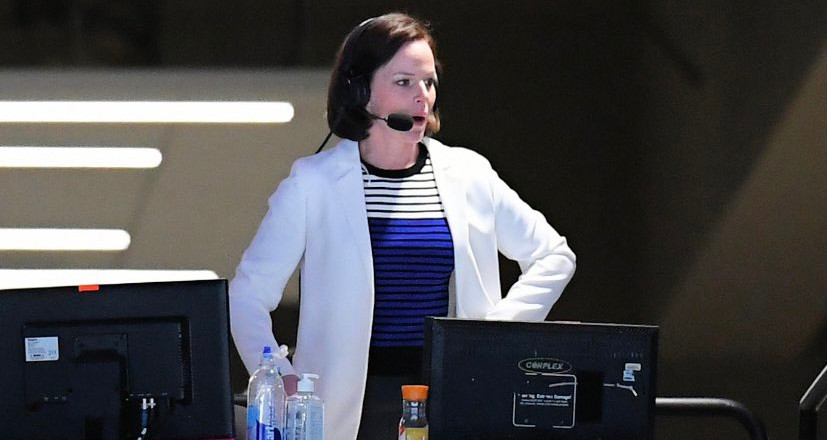 Being categorized as a sports media pioneer is not new for Hextall. She became the first woman to call the NCAA men’s hockey title game for ESPN in 2019, and the first woman to serve as a regular play-by-play broadcaster for nationally-televised NHL games last season. But as she looks back on her first season as an NHL announcer for ESPN, Hextall categorized it by saying, “I survived.”

“It wasn’t fun,” Hextall added in a recent interview with Sean Fitz-Gerald, senior writer for The Athletic. “There was a lot of, more than anything, mental gymnastics to go through. There was a lot of criticism—not just within the social media audience, but also within the brethren of hockey—that I was not used to facing. And a lot of it seemed to stem from my gender.”

Hextall comes from a well-known hockey family, having a grandfather, two uncles and cousin who each enjoyed long and celebrated NHL careers. Watching her family perform in the limelight and having covered worked in sports media for nearly two decades herself, Hextall is used to criticism. But some of the feedback she received during her first season calling NHL games on ESPN was angry, hateful and offensive.

In June, Hextall spoke at a conference hosted by The Coaches Site where she addressed the need to create more opportunities for women in hockey and offered her own experiences:

.@ESPN play-by-play commentator @leahhextall delivered a raw, emotional and shocking (but sadly not surprising) presentation at #TCSLive. Watch the video the sports world needs to see – no subscription required. ? https://t.co/lDHchXvzUH

Near the end of her session, Hextall shared one of the worst messages she received during her debut NHL season at ESPN. According to Fitz-Gerald, the message was sent to Hextall via email during the NHL Playoffs.

“It said, ‘You live in Winnipeg. It wouldn’t be very hard to track you down,’” Hextall told the audience. “After the individual threatened to assault Hextall, the person continued, “‘And when I’m done with you, I will then put a gun in your mouth and blow out your brains so no one has to hear you call a hockey game again.’”

Hextall said she only shared the message with her sister before deleting it, choosing not to contact the police.

Hextall is not new to working in sports media, broadcasting, hockey, or the national stage, where dealing with criticism is an accepted aspect of the job. But sending a person sexist, misogynistic abuses and threats in an attempt to make them feel unwelcome or fearful to work in an industry that’s supposed to be fun, is appalling.

“I love my job, and I love what I was doing, but it was very difficult this year,” Hextall said. “It wasn’t fun. It wasn’t showing up to the rink and feeling like I was working in a candy store, like it usually would when I cover hockey.”