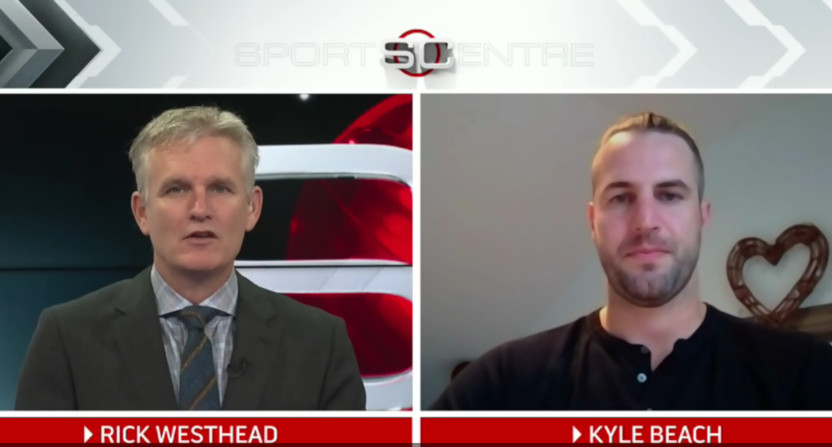 Through much of the reporting and then the ultimate investigation into the Chicago Blackhawks’ handling of 2010 sexual abuse allegations against then-video coach Brad Aldrich, the identity of the key player in question was only listed as “John Doe.” On Wednesday, Kyle Beach revealed in a TSN SportsCentre interview with Rick Westhead (who had led much of the reporting into this, along with The Athletic team of Katie Strang, Mark Lazerus, and Scott Powers) that he is the aforementioned John Doe. Beach, now playing in Germany, spoke candidly about how this abuse has affected him, and how disappointed he was in the responses and denials from the Blackhawks’ organization and the lack of action from the NHLPA, and the full conversation between him and Westhead is well worth a watch or a read (there’s a full transcription in that TSN link). But his comments that really stand out are on why he’s going public with this:

RW: Kyle, why come forward now? Putting your name out there, being on television, this is a big decision. I wonder what your thought process was being up to this point and why you want to do this.

KB: It’s been a…it’s a big step for me, my process of recovery, as I process the events that happened and as I truly deal with the underlying issues that I have from them. For me, I wanted to come forward and put my name on this. To be honest, it’s already out there. The details were pretty accurate in the report, and it’s been figured out. More than that, I’ve been a survivor, I am a survivor. And I know I’m not alone. I know I’m not the only one, male or female.

And I buried this for 10 years, 11 years. And it’s destroyed me from the inside out. And I want everybody to know in the sports world and in the world that you’re not alone. That if these things happen to you, you need to speak up. Because there is support systems like Sheldon Kennedy, like the U.S. gymnastics team, like USA Soccer, there is support systems. There is people that are with you. And I hope that this entire process can make a systematic change to make sure this never happens again. Because it not only affected me as a young adult and now as a 31-year-old man, but it also affected kids because it was not handled in a correct way.

…RW: Kyle, where do you go from here? You’ve now talked publicly about this; you’ve talked about how this will affect you for the rest of your life. How do you take something so horrible and try to find something positive in that? Whether it’s serving the public or reaching out to other abuse survivors, have you thought about where you do from here?

KB: To be honest, I haven’t had the chance. This is all so fresh. But the one thing I want to make sure comes from this is change. I want to make sure in any way possible that this does not happen to somebody else. Because it will happen again, I will not be the only one. Whether it’s in hockey, soccer, any sport, any business, any company, there needs to be a system in place that it gets dealt with. And that it’s somebody making the decision to deal with it, that has no skin in the game. Because if this had been reported to someone other than John McDonough, or Joel Quenneville or Stan Bowman that didn’t have skin in the game of winning a Stanley Cup, it would have been dealt with and would have protected all of the survivors that came after me.

It’s unfortunate to hear from Beach that “The details were pretty accurate in the report, and it’s been figured out.” That’s the one criticism that can be (and has been) levied at the NHL/Blackhawks decision to release the entire report, which otherwise was a much better approach than what we’re currently seeing in the NFL around the Washington Football Team investigation. Certain details that could be used to identify Beach should have been omitted or redacted from the public report, and his decision to identify himself as John Doe should have been entirely up to him rather than pushed on him by this situation. But his decision to publicly identify himself and speak about the change he wants to work towards does have the potential to be a positive.

The report here was already damning, and it already led to significant change within the Blackhawks’ organization. It may yet lead to change with other organizations, with both Quenneville (then the Blackhawks’ head coach, now the head coach of the Florida Panthers) and Kevin Cheveldayoff (then the Chicago assistant general manager, now the general manager of the Winnipeg Jets) due for meetings with NHL commissioner Gary Bettman about this. But Beach’s comments here crank up the pressure on Quenneville in particular, and they also apply some pressure to NHLPA executive director Donald Fehr (not really a subject of that report), with Beach saying to Westhead that he knows Fehr was told about this by two different people, and “for him to turn his back on the players when his one job is to protect the players at all costs, I don’t know how that can be your leader. ”

Another takeaway here here is the praise Beach has for the various players and coaches who confirmed on the record that key organizational figures were told of these allegations, at a time when the team was putting out countless statements disputing that. And that goes to show the value of reporting, and of people speaking up with their names behind something. The repeated reporting push on this from Westhead, Strang and others eventually led to the investigation, and eventually led to these consequences, but a big part of what got it there was the people willing to support these claims publicly during a time of strong institutional denial.

Overall, much more clearly needs to be done to prevent sexual assault, sexual abuse, and sexual misconduct in sports. This year alone has seen that as a focus with the Blackhawks, with the Washington Football Team, with the NWSL, with LSU football, and with Canadian women’s soccer, but other recent examples include the U.S. national gymnastics program, Baylor football, and many more. Leagues and teams need to do more to protect their players, and to provide robust reporting structures, and to take filed complaints much more seriously, and to ensure that those who perpetrate harm don’t go on to do that elsewhere. There is progress being made, but there’s still a long way to go. Hopefully Beach’s comments here can help further reinforce the importance of reform, and the importance of ensuring this doesn’t happen to others.