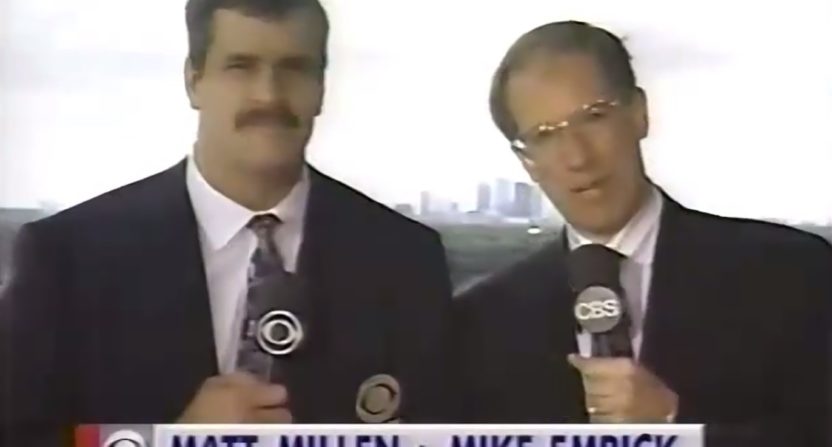 Mike Emrick is one of the most respected play-by-play men not just in hockey, but in all of sports. And while he’s best known for hockey, did you know he’s called other sports? That’s right. In his long career, not only has Emrick called multiple Stanley Cup Finals and Olympic hockey tournaments, but he’s also called the NFL and the NCAA Tournament as well as water polo at the Summer Olympics and even lacrosse.

Thanks to YouTube, we can go back to the 1990’s and find some of his past work. You’ll find various NHL games as well as the 1996 World Cup of Hockey, but the amazing find is that Doc has called the NFL and the NCAA Tournament. He did both for CBS. It’s amazing to hear Emrick do play-by-play on other sports, especially those that don’t have the same pace as hockey.

In 1995, CBS hired Doc to call six NCAA Tournament games at the Knickerbocker Arena (now Times Union Center) in Albany, NY. And it included a triple overtime thriller between Old Dominion and Villanova. His partner was former Iowa and USC coach George Raveling. This was a great game and Emrick did rise to the occasion:

Now let’s go back to 1992 when the NFL on CBS involved the NFC package. In Week 2, the Green Bay Packers visited the Tampa Bay Buccaneeers in what was then a NFC Central Division battle. Mike’s partner for this game was none other than the future-General Manager of the Detroit Lions, Matt Millen. These two men obviously went in opposite directions in their respective careers:

Moving into the 21st Century, Doc called water polo at the 2004 Athens Olympics and again at the 2012 London Olympics. Here’s his call of the 2012 Water Polo Olympic Trials on the old Universal Sports. His partner here is Julie Swail. Just great to hear his voice on another sport:

Last year, Doc called a Pittsburgh Pirates game with Bob Costas on MLB Network, but perhaps one of his best non-hockey calls was him doing an impromptu play-by-play of his dogs playing in his yard for HBO Real Sports’ Andrea Kremer: