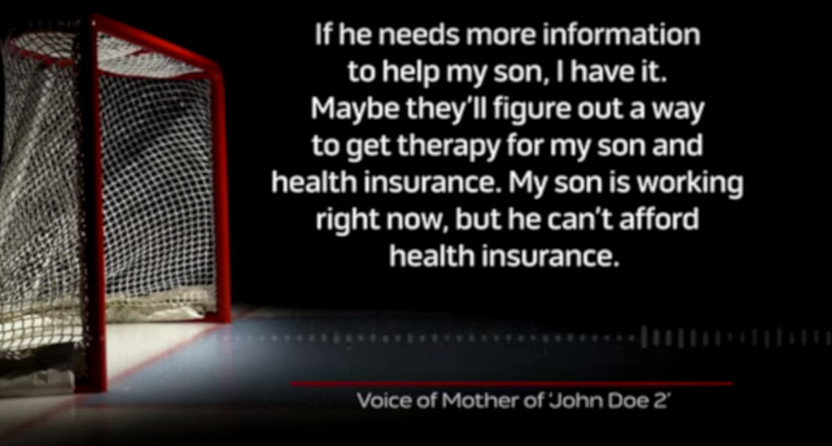 The last year has seen a remarkable shift on the lawsuits against the Chicago Blackhawks over their employment of former video coach Brad Aldrich. That started with the team initially pushing back against those lawsuits and telling the NHL “there was no merit” to the claim, but advanced to former coaches and players speaking out, to an eventual independent and published investigation into Aldrich’s sexual abuse of a player and the actions the organization took (and didn’t take) afterwards, and to Kyle Beach revealing himself as the “John Doe” in the lawsuit and speaking to TSN’s Rick Westhead about how Aldrich’s abuse had affected him. Now, the mother of “John Doe 2,” the high school player Aldrich sexually assaulted when that player was 16 (Aldrich was eventually sentenced to nine months in jail and five months of probation for that offense) has spoken to Westhead in an excerpted interview aired on TSN’s SportsCentre Monday night. Here’s that interview:

The parts in there where that woman talks about the effect Aldrich’s abuse had on her son, and how she discovered that (starting around 4:20), are particularly heartwrenching. And she talks about how she was determined to fight for him, saying “I’m here for him, 100 percent. He wasn’t going to live through this nightmare by himself.”

John Doe 2’s mother also talks around 7:00 about her response to Beach’s TSN interview. There, she says “I just wanted to reach through the screen and hold him like I did my son that day. I just wanted to hold him. I just wanted to tell him that everything is going to be okay, it’s got to be okay, and we’re here for him, and we don’t fault him at all. He’s not at fault for this at all, not at all. He’s a survivor, like my son. Yes, they were victims, but they’re surviving now. And he is so courageous, and we admire him more than he even knows.”

And at 8:35, Westhead asks John Doe 2’s mother about her response to NHL commissioner Gary Bettman, who said in a press conference last week he needed “more information” before he would commit league resources to paying for therapy for her son. She says “I think he needs a new job, that he needs to retire. I don’t think he has empathy for kids, or even young adults. And if he needs more information, I’ve got a whole folder of it right here for him he can read. I’ve got the court documents of the conviction. If he needs more information to help my son, I have it. Maybe they’ll figure out a way to get therapy for my son and health insurance.”

“My son’s working right now, but he can’t afford health insurance. He tries to make end meets with the job he has, and health insurance would help him get through his social anxiety and his PTSD from this. And I’m worried for, and he’s worried for, future possible problems with all the drug use that he had taken back then, that there might be some repercussions from that.”

What’s really notable here is the impact from this woman speaking out about what this abuse did to her son. Aldrich’s behavior here had already been reported, and it led to a criminal conviction for him, but as with Beach’s interview, this illustrates the heartwrenching and personal consequences from that. And the comments about health insurance and therapy costs make Bettman’s response look even more callous. The league already handed down a $2 million fine for the Blackhawks (a small portion of the $45 million they had in operating income in 2019-20), but Bettman’s comment that the NHL needs “more information” before dedicating any money to support John Doe 2’s mental health following abuse from someone a NHL team let go with no public disclosure of his offenses is absurd. The amount of money involved here is a rounding error for this league, but they’re so focused on avoiding liability that they’re continuing to do the wrong thing.

It can’t have been easy for John Doe 2’s mother to speak up publicly like this. This is such a painful and personal topic, and it’s clear that discussing it is still extremely hard for her. But there’s value to her doing this, and to TSN employing a journalist like Westhead who can dive deep on these issues, and doggedly report them even when the league and its teams are in full denial mode, and to them using their SportsCenter platform to get this story out there. The personal testimony from Beach helped take this story further, and helped illustrate just how poorly the NHL and the Blackhawks have handled it. And this testimony from John Doe 2’s mother adds yet more to that, and shows how careless and callous the league’s response has been.