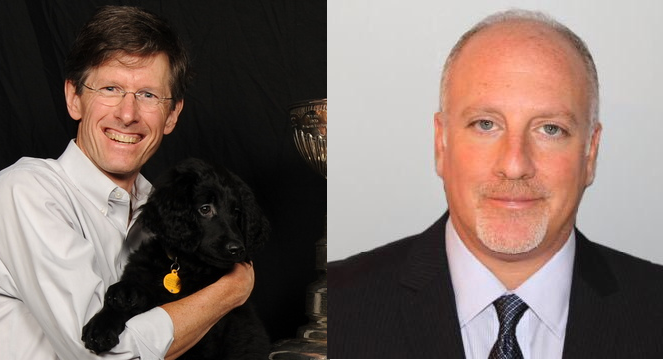 The fireworks over long-time Boston Bruins’ play-by-play announcer Jack Edwards’ call of an injury to Roman Polak of the Dallas Stars Thursday night have continued. That call, which included Edwards (seen at left above) describing Polak’s injury (which was eventually diagnosed as a fractured sternum) as “bad hockey karma” (he was trying to check the Bruins’ Chris Wagner in the back, missed, and slammed into the boards), led to Polak’s agent Allan Walsh (seen at right above) calling Edwards “truly a piece of shit and an absolute disgrace” on Twitter. As per Fluto Shinzawa of The Athletic, both sides were sticking to their guns Friday evening:

“I stand by my real-time call,” said the NESN play-by-play announcer. “Brick [analyst Andy Brickley] encapsulated it when he said was it was self-inflicted.”

…When reached Friday, Walsh said he stood by what he wrote last night. He did not want to make additional comments.

While many have agreed with Walsh’s criticisms, especially when it comes to the “bad hockey karma” line, the condemnation hasn’t been universal. Some broadcasting figures have taken Edwards’ side, with Keith Olbermann in particular criticizing Walsh for not including Edwards’ more somber comments afterwards in the clip he tweeted.

Our best to your client.

But, no, the act of piece-of-shitting is to ignore the immediately solemn tone of voice in the clip, and deliberately cut off the rest of the clip so the subsequent genuine concern and empathy isn’t heard and context erased. You owe Edwards an apology. https://t.co/dcR6IWouo9

For the record, Edwards and Brickley watched the replay afterwards, and their comments there were more restrained, with Brickley saying “He wants to be a physical guy. He is a physical guy. He has an opportunity to, you know, make a hard, physical, body-contact play on a physical guy like Chris Wagner. But all of a sudden, he gets himself into an awkward position and he goes into the boards in a very vulnerable position. And that did not end well” and Edwards responding “No, that’s head, shoulder…” Both then went silent as Polak was carried off the ice.

Plenty of people have weighed in on both sides of this, and it’s interesting to see both sides sticking to their guns at this point. For those expecting Edwards to apologize and recant, it doesn’t look like that’s coming.

[The Athletic; photos from Walsh and Edwards on Twitter]