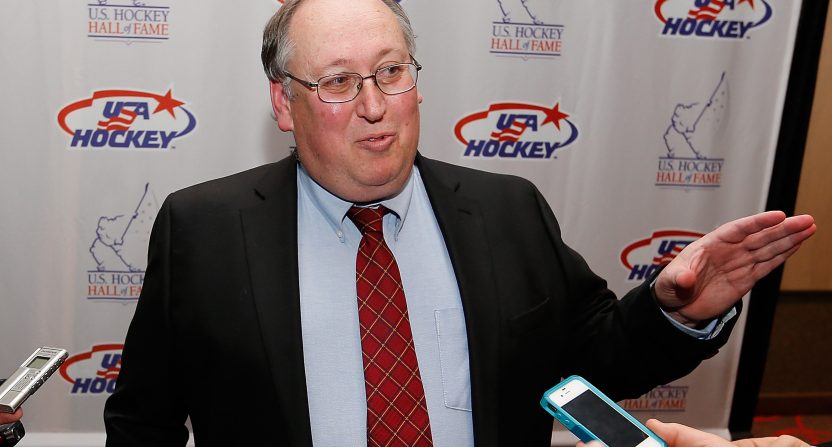 There is never a good time to be laid off. But losing a job toward the end of the year, during the holiday season, seems especially cruel. For an unfortunate few, a time that’s supposed to be filled with joy, peace, and celebration can often bring disappointment and heartache.

USA Today national hockey writer Kevin Allen is the latest casualty of a company’s cold decision to cut staff before moving on to a new year. Allen announced on Thursday that he was leaving the news outlet after 34 years, part of the latest wave of layoffs amid the merger between Gannett and Gatehouse Media. His last day on the job will be Friday (Dec. 20).

Allen began working for USA Today in 1985, “on loan” as he put it, from the Port Huron Times Herald, where he covered the Detroit Red Wings for four seasons. With a national platform, Allen covered the entire NHL and became one of the sport’s leading reporters and columnists.

Shout to the heavens and tell Yogi it's over. After 34 seasons, I'm out as USA TODAY's hockey writer. Details aren't interesting. Merger. Staff reduction. It was my turn. Was always proud to work for nation's newspaper. Still am. Hoping to stay in NHL. https://t.co/ONHuij0hA5

As he explained in his farewell column, Allen saw a whole lot during his 34 years on the hockey beat, spanning generations with his coverage:

“I’ve enjoyed an incredible run. Thirty-three Stanley Cup Finals. Ten Olympics. Pushing 800 NHL playoff games. Except for Zdeno Chara and a handful of others, most current NHL players weren’t born when I started writing about the NHL for USA TODAY.

“When Keith Tkachuk started playing in the NHL in 1991, I had already been the national writer for six seasons. Today, his sons Matthew and Brady have been in the NHL a combined six seasons.”

Allen also recounted when he broke the news of Mario Lemieux coming out of retirement in 2000. In the days before social media, Lemieux told Pittsburgh Penguins executives to let Allen’s report have the stage for 40 minutes before he and the team confirmed the news.

“That was a clean kill by Kevin. Nobody else had it,” said Eric Duhatschek, former vice president of the Professional Hockey Writers Association in 2014. “Local guys didn’t get a whiff of it. National guys didn’t get a whiff of it. Kevin got it. You only get stuff like that with one part asking the right question at the right time, but also having a lot of people in your sphere who trust you and to tell you things.”

By the way, Duhatschek made those remarks after Allen was honored with the Elmer Ferguson Memorial Award for excellence in hockey journalism. Allen has a plaque in the Hockey Hall of Fame because of it.

The prior year, in 2013, Allen was awarded the Lester Patrick Trophy for outstanding service to hockey in the United States. That award typically goes to a player, coach, or executive involved in hockey, not a member of the media. Allen is one of six winners recognized for his contributions through broadcasting or journalism.

On a personal note, Allen has always been generous with his time with fellow reporters. That certainly benefited me when I covered Detroit sports in 2007 and asked Allen if he could contribute to a Red Wings season preview I wrote for the now-defunct Motor City Sports magazine. Helping out a fledgling writer to give an article credibility with his name and analysis is a favor I’ll always appreciate and remember.

Allen says he hopes to still work in the NHL now that he’s leaving USA Today. Here’s hoping that another national outlet, an NHL team, or the league itself hires a man who’s devoted decades to covering and advocating for hockey, utilizing his skills and experience.