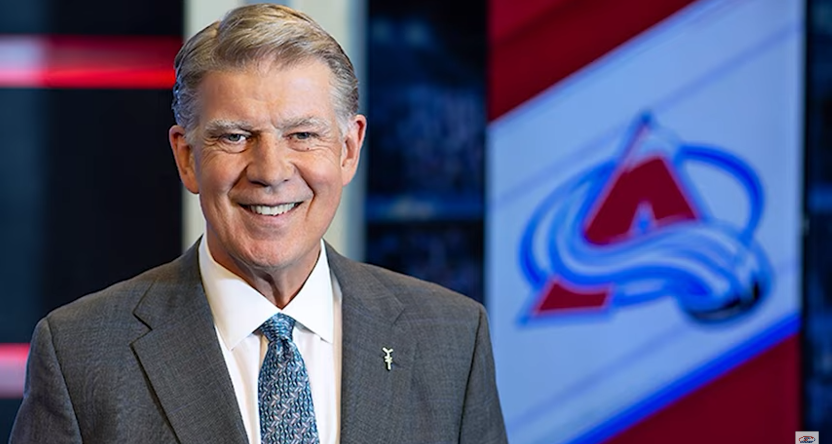 The hockey world lost a notable figure this weekend. That would be Peter McNab, who played in the NHL from 1973-87 and then went on to decades of work in broadcasting.

McNab’s broadcasting career included work as the Colorado Avalanche‘s primary television analyst since their first season in Denver in 1995-96, eight seasons as the TV analyst for the New Jersey Devils before that, and national work (especially around the Winter Olympics) for TSN in Canada as well as U.S. networks NBC and TNT. He was inducted into the U.S. Hockey Hall of Fame last December.

McNab was diagnosed with cancer last September. His  cancer went into remission in February, but it eventually returned. His passing at 70 sparked a lot of tributes; here are some of those.

Today we lost a great man who meant so much to us and the hockey world.

The @NHL mourns the passing of Peter McNab, who brought professionalism and excellence to the National Hockey League as a player and a broadcaster for the last 50 years. pic.twitter.com/z7JrVACHcP

Our heartfelt condolences to the friends and family of U.S. Hockey Hall of Famer Peter McNab, who passed away today. pic.twitter.com/80YtbeEfjx

As word emerges of the loss of my partner, our friend and an incredible man and father, please keep Peter’s wonderful family in your thoughts and prayers and remember him for outstanding family man, hockey player & broadcaster he was. I will be not be responding as we all mourn.

Grew up with Peter as the color man for the Devils. RIP and thinking about his family at a difficult time. https://t.co/iH3niw6eih

This absolutely sucks. An absolute ray of sun of humanity lost. The best kind of folk. Rest, Peter McNab. https://t.co/rXubzEICCv

Our hearts go out to Peter McNab's family, friends and all who knew him.@KenDaneykoMSG shares his memories of his former teammate. pic.twitter.com/0UoE8z5JvF

We are deeply saddened by the passing of Peter McNab. “Maxy” was a beloved member of the “Lunch Pail AC” & one of the most dynamic goal scorers in club history.

We send our condolences to Peter’s family, friends, & the entire Avalanche organization.

RIP to Peter McNab. McNab led the AHL in scoring during the 1973-74 despite playing only 49 of the 76 games. During his days w/ the Bruins you could put him down for at least 35 goals & about 80 pts every year. He was good & he was consistent. McNab was also longtime Avs analyst. pic.twitter.com/ZA6t0yaTL9

You wanna see what the @Avalanche players thought of Peter McNab?

Watch this scene right after they won the Cup. https://t.co/FLNjYQ8K9r

I'm so glad Peter McNab had this beautiful moment with Gabe Landeskog after we won the Cup this summer. RIP. pic.twitter.com/njmtjjobwZ

McNab was born in Vancouver, B.C., then moved to San Diego at 14 because his father Max (a former NHL player with the Detroit Red Wings who then went on to coaching and executive roles) had taken a role as the head coach of the newly-founded San Diego Gulls of the Western Hockey League (the former professional minor league, not the current major junior league), following previous time with that league’s Vancouver Canucks and San Francisco Seals. The whole McNab family eventually wound up playing prominent roles in the NHL; Max’s career included time as the general manager of the Washington Capitals and Devils, plus time as the president of the Central Hockey League, and he was awarded the Lester Patrick Trophy for contributions to hockey in the U.S. in 1998. Meanwhile, Peter’s brother David spent 43 years as a NHL scout and executive with the Capitals, New York Rangers, Hartford Whalers, and Anaheim Ducks, retiring last May after 28 years in the Ducks’ organization.

As for Peter McNab, he initially shone as a baseball player, and went to the University of Denver on a baseball scholarship. But he then wound up playing three seasons as a center on the Pioneers‘ hockey team, leading them to top-four finishes each year and a national runner-up finish in 1972-73 (a year where he scored a team-high 72 points with 32 goals, was named first-team all-WCHA, and was named to the NCAA All-Tournament Team).  He then became a rare-for-that-time NHL draft pick out of the NCAA ranks, with the Buffalo Sabres selecting him 85th overall in 1972.

Following that draft, McNab started his professional career in the minor-league American Hockey League, and led the Cincinnati Swords in scoring (with 34 goals and 39 assists) in 1973-74 despite only playing 49 games with them while also playing with the Sabres. He’d play for the Sabres through 1975-76, then for the Boston Bruins through 1983-84, then with the NHL version of the Canucks for a season and a half, and then finished his playing career with two seasons with the Devils. He also played for the U.S. national team at the 1986 IIHF World Championship. He finished his NHL career with 363 goals and 450 assists across 954 regular-season games, and his 813 career points are the 21st-highest of anyone U.S.-born or U.S.-representing.

McNab then went on to a remarkable run as a broadcaster. He started as a color analyst with the Devils on SportsChannel (the U.S.’ first regional sports network, and one that actually won the NHL’s national TV rights from ESPN beginning in 1988) in 1987, working alongside Gary Thorne. He spent eight years there, then joined the Avalanche broadcasts in their inaugural season in Colorado in 1995-96, first on Prime Sportsnet Rocky Mountain/Fox Sports Rocky Mountain and then on Altitude beginning in 2004.  He also worked on national Winter Olympic hockey coverage for TNT (game analyst in 1998), TSN (host and studio analyst in 2002), and NBC (game analyst in 2006). And he left his mark on many. Peter Baugh of The Athletic had a nice tribute to him Sunday, including a closing section on how McNab was still gracious and eager to talk to fans this year despite his health struggles:

One day back in training camp, I brought up his sickness. I had previously tried not to bother him about it, other than to say I was sorry after his initial diagnosis. But I had watched over and over as people came up to him to tell him he looked great, not knowing the cancer was back. He was always so warm in response, as hard as it must have been. So I told him his graciousness impressed me beyond words. It takes a rare type of person to show such exceeding goodness to anyone who wanted to say hello and wish him well. I wanted him to know that.

There were difficult moments, he replied. It’s hard when the conversations with family become real. When they become about what happens after you’re gone. It was heartbreaking to hear, and I couldn’t quite figure out the right response.

He saved me the trouble. He said something about hockey, and that had our attention once again.

Our thoughts go out to McNab’s family and friends.