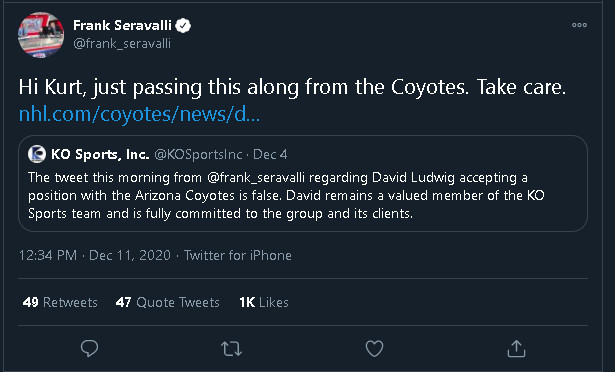 It’s not unusual to see entities dispute reports about them that they don’t like, but much of the time, those disputes are couched in language that quibbles with particular interpretations of certain comments rather than the outright veracity of the report. So when there’s an actual, full-out denial of a report, it can bring up questions of if the reporter was somehow wrong. And it’s really notable to see a reporter strike back on a full-out denial of something that wound up happening. That’s the case with what TSN reporter (and Professional Hockey Writers Association president) Frank Seravalli tweeted Friday after the Arizona Coyotes officially announced that they’d hired David Ludwig as Director of Hockey Operations and Salary Cap Compliance; Seravalli reported that move last week and received a “false” retort from KO Sports, where Ludwig had been working.

Hi Kurt, just passing this along from the Coyotes. Take care. https://t.co/eITBVKGXrR https://t.co/5pMWIUvVl4

That’s a great, and patient, retort from Seravalli. And it’s a nicely-muted one, too; it doesn’t make any demands or throw any insults, but rather just indicates that KO Sports’ past criticisms did not hold up. And it makes Kurt Overhardt (the Kurt referred to there; he’s the founder and CEO of KO Sports) and KO Sports look pretty silly for trying to rebuff Seravalli’s report. As per the KO Sports Twitter account, they never bothered to apologize to Seravalli for calling his very-true report “false,” but they did spend much of Friday talking about how excited they were for Ludwig, including with this tweet:

Congratulations to David Ludwig on accepting a position with the @ArizonaCoyotes working on contract negotiations and salary cap management! David has been with KO Sports since 2010 and we thank him for the incredible impact he has had on our group, our clients and their families pic.twitter.com/AC8VHMf48U

It’s understandable that subjects of reporting aren’t always going to like how a story on them is presented. And that’s fine. Disputing particular accounts of how something went down can have some merit, and can sometimes provide additional perspective on what actually happened.. But KO Sports would have been much better served here by saying nothing in the first place rather than trying to challenge Seravalli. And their decision to call Seravalli’s report “false” backfired in a big way.