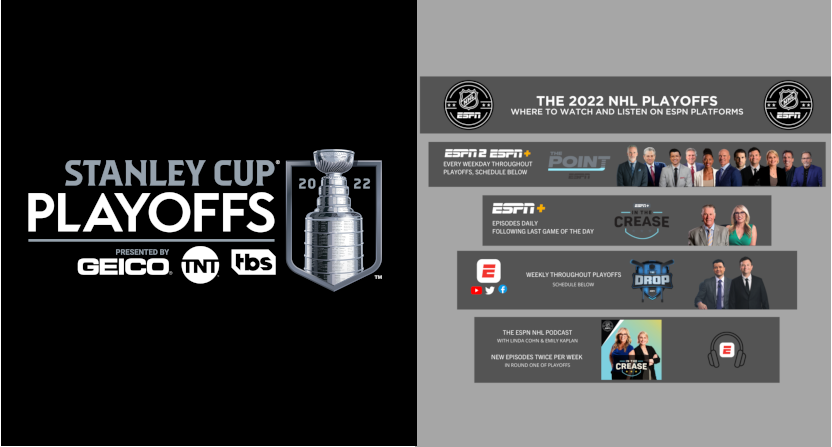 One of the elements discussed even before ESPN and Turner signed their NHL deals was how those deals would fit with those networks’ NBA coverage, especially with the playoffs in both leagues having significant overlap. The large first round of the NHL playoffs proved tricky at times for even one broadcaster that didn’t have NBA rights, with NBC sometimes putting games on the likes of CNBC and Golf Channel, so how would it work across two broadcasters that also had to deal with NBA commitments? Well, now that the first-round schedules are out, the answer appears to be “pretty well.”

Every single NHL playoff game in the first round is set to be aired on ESPN, ESPN2, TNT, or TBS. That’s a step up from Golf Channel in particular, which had 16 million fewer households than CNBC or USA in 2018, and which has around 15 million less than the aforementioned four ESPN and Turner networks these days. And that chart (of Nielsen carriage estimates, from Sports Business Journal‘s John Ourand in January) has those four networks as the top four cable networks by household distribution.

The NHL setup is worth some more discussion, as it’s new. These games are all on cable, and there’s a slight access drop there. NBC would do a few early-round games on broadcast NBC on the weekend, while ABC won’t air the NHL until later in the playoffs thanks to their NBA commitments, But this is on well-distributed cable (all things considered; of course these networks are below where they were a few years ago, but they’re still at the top of the cable sports tier), and the NHL regular season averages actually rose this year to their best heights in five years, despite a lower percentage of games on broadcast TV (and with less games on TV overall, not counting the streaming packages on ESPN+ and Hulu).

One big challenge under this new setup is if games wind up going to overtime and coverage gets bumped, though. With NBC, the networks carrying NHL playoff games (NBC, NBCSN, USA, CNBC, sometimes Golf) were all under the NBCUniversal umbrella, and it was possible to start a later game on one of those other channels if the first game was in overtime. With DiscoveryWarner-owned Turner and Disney-owned ESPN, though, cross-ownership bumping isn’t possible (at least at this point).

The current plan appears to be for ESPNU (primarily) and ESPNEWS as overflow channels on the Disney side, and TruTV and HLN as overflow channels on the Turner side. And those networks are way below even Golf Channel in carriage: ESPNU was in just 44.9 million homes in January (versus Golf’s 65.5 million), and those other three weren’t listed. So there very easily could be some aggrieved people if there’s a long overtime game and much of another one winds up airing on a low-distribution network.

This brings up another important element here: streaming. While much of ESPN’s NHL coverage this year was available without cable/satellite/vMVPD authentication (with both the 75+ ESPN+/Hulu exclusive games and the migration of out-of-market service NHL.tv into ESPN+), most of the playoffs will not be.  Sean Shapiro writes at The Athletic that the only portion of the playoffs available if you only have ESPN+ and not a cable/satellite/vMVPD package will be the ABC games later on, which will be simulcast on ESPN+. The ESPN and ESPN2 games (and, presumably, ESPNU/ESPNEWS overflow) will be available in the ESPN app and on ESPN.com, but only with MVPD authentication. The Turner games will be available in the TNT or TBS apps, and on those networks’ websites, but again only with authentication. And while Turner has acquired the rights to stream games in HBO Max, they’re not doing that for this year’s playoffs.

All in all, though, it is somewhat remarkable that these companies have found ways to make both the NHL and NBA playoffs work across their big cable networks. But perhaps we shouldn’t be surprised, as there are some NBA scheduling quirks that help out here. A very illuminating quote on this front came from ESPN executive vice president (programming and scheduling) Burke Magnus to Ryan Glasspiegel at The Big Lead back in 2018, long before these deals were struck:

This is the one time of year, for those scheduling wonks like myself, where if you really pay attention you figure out that the oddity of the NBA playoff schedule is that in the early rounds our games are limited to Friday through Sunday and Turner has all the week. That is still a vestige of us leaving the mid-week available to do the NHL playoffs. Now, it goes back two deals in the NBA, so it’s not looking ahead, it’s a vestige from the past, but this is a long way of saying we could schedule the NHL playoffs pretty easily even with our NBA commitment right now.

And they’ve now done that, and Turner has as well. So it’s going to be a very busy few weeks for live sports playoff action on those networks.