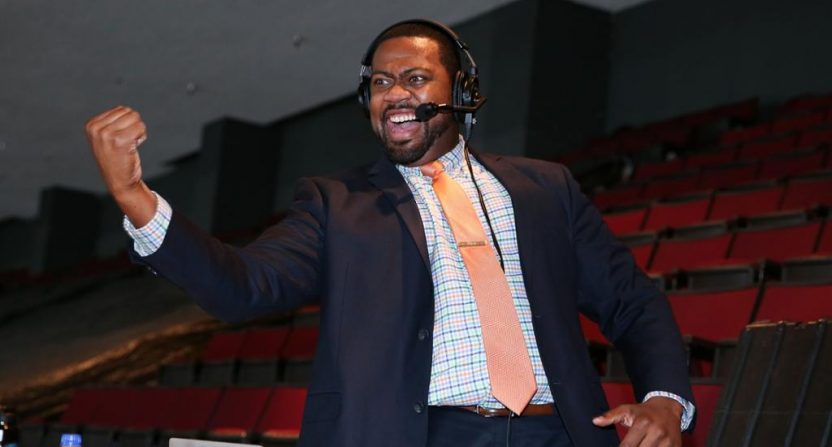 Fitzhugh was profiled by The Athletic back in February, who noted that he was the only Black play by play announcer in all of North American professional hockey at the time. Conversations between the Kraken (before they even had a name) and Fitzhugh have been ongoing since that profile (again, per The Athletic) before concluding over the summer.

The Kraken’s website has some quotes from Fitzhugh about his hiring.

“I want Kraken fans to know I share their passion for hockey and the inaugural season of this franchise,” said Fitzhugh, who starts his position Sept. 1 and will be moving west mid-September. “I intend to be out in the community and meeting fans when the time is right. Until then, we will create other ways to reach out.”

“As someone who’s worked in hockey for more than a decade, to be named a part of the broadcast and content team for a brand-new NHL franchise – particularly one with an organization as strong as the Kraken – is a dream come true,” Fitzhugh said. “Getting to the NHL has always been my goal. I look forward to representing the Kraken organization throughout the greater Seattle community.”

The Athletic’s story about Fitzhugh’s hiring also notes that it’s still unknown whether or not Fitzhugh will be the team’s radio or TV announcer. The Kraken, who begin play in the 2021-22 season, don’t have TV or radio deals lined up yet. You’d assume that their games will air on Root Sports Northwest in the Pacific Northwest (especially when you consider that the network is majority owned by the Mariners, and also airs Seahawks magazine and shoulder programming), but a local station (as is the case with both the Sounders and the Storm) could be a possibility, as could NBC Sports Northwest, the Oregon-based cable home of the Trail Blazers. However, the inevitable broadcast conflicts with the Blazers might make that a non-starter, as could NBC’s cuts to its RSNs this week.

Fitzhugh has been the play by play voice of the ECHL’s Cincinnati Cyclones for the last five seasons, also working as the play by play broadcaster for Bowling Green’s men’s hockey team while in college before moving on to the USHL and then the Cyclones. At the very least, the Kraken are crafting their own identity with a mix of both new and experienced voices off the ice and in the front office instead of relying on retreads, which has to be exciting for fans.