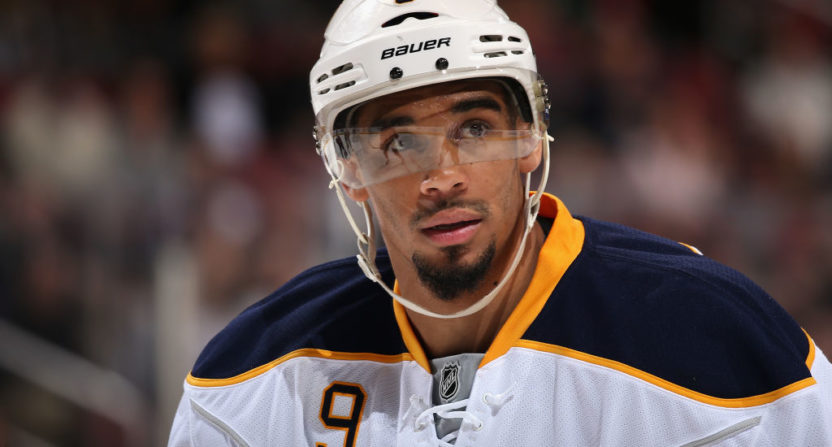 Evander Kane has been a familiar name in hockey media over the years and that might be putting things lightly. Kane has been at the heart of countless stories, from persistent trade rumors all the way to the infamous brick of cash story and the charges over a bar incident.

Has Kane noticed all of the rumors and stories which have littered every hockey website and radio show over the years? You better believe it.

However, according to The Province, Kane isn’t worried about all the rumors and can even joke about all of the press coverage he regularly receives.

“My name seems to create a buzz with some reporters and radio stations. I wonder if I have some thank-you cards coming.”

Some of the criticism thrown Kane’s direction is deserved, but he’s probably had more than his fair share at the age of 25. He has voluntarily brought on some of that bad attention, but the constant questioning regarding his play and his future in the NHL has to be exhausting.

Still, Kane appears to be making light of the nonstop trade rumors.

“Do I worry about the rumors? No. The funny part about rumors is that if you don’t know something is going on, then nobody else does,” said the 6-foot-2, 211-pound Kane. “I have an agent (Don Meehan) who is knowledgable and tapped in. He gives me updates when I need updates. I’d like to think I’m well informed when I need to be.”

Entering his ninth season in the NHL, Kane will be looking to build on what many would describe as a strong 2016-17 where he scored 28 goals to lead the Buffalo Sabres. With one year left on his current deal with the Sabres, the rumors are once again heating up and all of the outlets which cover hockey – like this one – will be ramping up their coverage.

At the very least, it sounds like Kane has a good attitude about all of the coverage which at times borders on being a bit too critical.