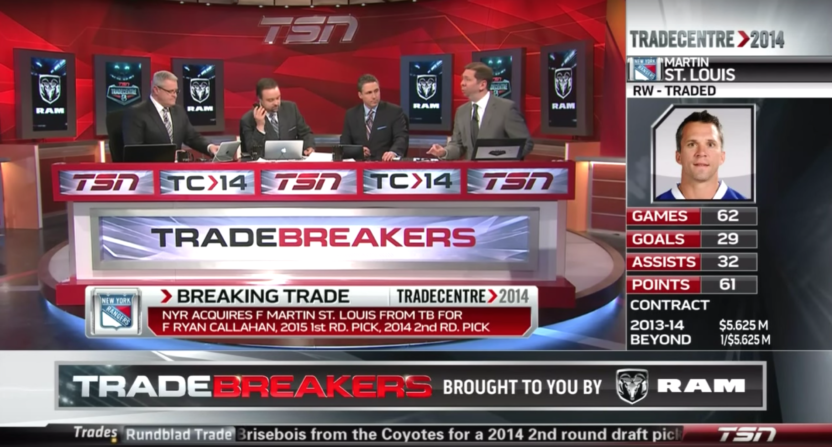 Hockey fans who accuse ESPN of ignoring their sport won’t have quite as much to gripe about at this year’s trade deadline.

ESPN announced Friday that it will simulcast TSN’s TradeCentre will be simulcast on ESPN3 all day Monday and on ESPN2 from 2-4 p.m. ET. The show will be hosted by James Duthie, with analysts including Bob McKenzie, Darren Dreger, Pierre LeBrun and others.

Hey American friends, #Tradecentre will be on ESPN3 all day Monday, and ESPN2 from 2-4pm et. Never felt closer to @espnSteveLevy @Buccigross @adnanESPN

ESPN’s decision to simulcast TSN (of which it owns 20 percent), seems to reflect both a desire to air hockey talk and a reluctance to actually invest in its own production. The network’s NHL coverage was hit hard in last spring’s round of layoffs, and although ESPN has since enlisted Emily Kaplan and Greg Wyshynski, it still doesn’t have a robust hockey operation.

This is not the first time ESPN has turned to another network to cover up its own staffing deficiencies. Last April, following the layoffs, ESPN announced it would simulcast MLB Network’s daily show Intentional Talk in lieu of producing its own baseball program. Airing one day of TSN’s NHL coverage isn’t quite as drastic a step, but it does reinforce ESPN’s apparent interest in a simulcasting strategy.

For American hockey fans, any coverage on ESPN is better than no coverage on ESPN. The network has long drawn criticism for ignoring the NHL, even on one of the league’s busiest, newsiest days. As our Ben Koo wrote in 2012…

Tuning into the late night SportsCenter, I found myself totally miffed that the Trade Deadline didn’t get a single second of play whatsoever. On a day where no other pro games were taking place with the NBA off, the NFL combine completed, and a pretty light day of college basketball, ESPN’s credibility as a news organization took a major hit by ducking the subject entirely.

I know many will chime in saying ESPN is an entertainment company and this isn’t shocking given they don’t have any connection with the NHL, and I totally agree and see that side. Still though, when you basically have a monolopy over sports news as they do with SportsCenter, you would think one of the biggest days on the NHL calendar would get a little bit of airtime right? I was working under the assumption that there were four major pro sports but apparently not.

Well in 2018, ESPN will in fact cover the deadline on television (in addition to analysis on ESPN.com from Kaplan and Wyshynski). Yes, that coverage will air on ESPN2, will last only two hours and will feature production from another network, but it will be there nonetheless.