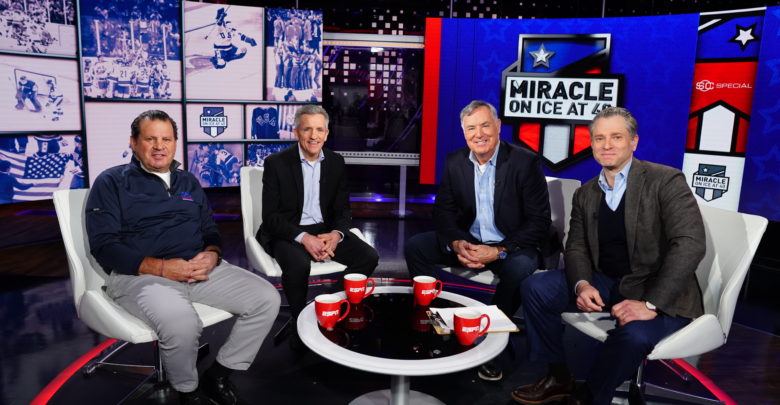 This month marks the 40th anniversary of the “Miracle On Ice,” the U.S. men’s hockey team’s Feb. 22, 1980 upset of the heavily-favored Soviet Union in the first game of the medal round of the 1980 Winter Olympics in Lake Placid, NY (they’d go on to clinch gold by beating Finland). And NHL Network, ESPN and NBCSN are all doing special programming around that anniversary. ESPN announced their plans Tuesday, which include a lot of coverage on both ESPN and ABC on Sunday, Feb. 23. Here’s more from their release:

On Sunday, February 23, ESPN and ABC will commemorate the 40th anniversary of the iconic ‘Miracle on Ice’ – when the United States hockey team defeated the heavily favored then Soviet Union on February 22, 1980, in their run to a gold medal. Special programming across ABC, ESPN and ESPN2 will air throughout the day including a one-hour SportsCenter Special: Miracle on Ice at 40, Walt Disney Pictures’ Miracle and more.

“The impact of the ‘Miracle on Ice’ game and eventual gold medal is still something that resonates across the sports world and beyond four decades later,” said Ilan Ben-Hanan, ESPN vice president, programming & acquisitions. “For the 40th anniversary, we wanted to help fans celebrate in different ways, including a brand new program featuring seldom seen game footage. Combining that with the first-ever presentation of Walt Disney Pictures’ Miracle on ESPN and an encore presentation of our 30 for 30: Of Miracles and Men, allows fans to experience the story from multiple perspectives.”

To relive all the history-making moments and define the legacy as it stands today, Jeremy Schaap will host SportsCenter Special: Miracle on Ice at 40 at 2 p.m. ET on ABC. Schaap will sit down with players from the team including Mike Eruzione, Jim Craig and Mark Johnson as they share their memories and describe the decades since. The special will include extended, rarely seen footage from the ‘Miracle on Ice’ game throughout the sixty minutes. An encore presentation will be available at 9 p.m. on ESPN2.

“It was really special to have three names synonymous with the ‘Miracle on Ice’ directly involved with the project,” said Denny Wolfe, ESPN senior managing producer. “The piece really takes you behind the scenes and brings to life the impact that one game had on the lives of many.”

ESPN’s SportsCenter will also feature a SC Featured segment covering the anniversary that morning, and Disney’s 2004 movie Miracle will be shown on ESPN at 6:30 p.m. Eastern with limited commercial interruption. ESPN will then also re-air their 2015 30 for 3o installment Of Miracles And Men (directed by Jonathan Hock) at 10 p.m. Eastern on the main ESPN network, and they’ll re-air the Schaap-hosted SportsCenter special at 11 p.m. Eastern on ESPN2.

Meanwhile, NBCSN is debuting a Miracle On Ice: 40th Anniversary special Wednesday, Feb. 19 at 11:30 p.m. Eastern (following their Wednesday Night Hockey broadcast). And NHL Network is also doing a lot around this anniversary. For starters, they’re airing Miracle six times in total this month, including with a #NHLMovieNight on Twitter on Feb. 22 (the airing starts at 4 p.m. Eastern that day) featuring participation from the league office, NHL teams, USA Hockey and more. Beyond that, they’re featuring a new conversation between Bob Costas and Al Michaels about that 1980 team’s run, its lasting impact, and Michaels’ famed “Do you believe in miracles? Yes!” call of the win over the Soviet Union.  Vignettes from that conversation will be shown throughout the month, and interspersed throughout the airings of Miracle. Here’s one of those about the call itself:

In addition to that, NHL Network will air a new conversation between host Tony Luftman and 1980 U.S. team captain Mike Eruzione throughout their February programming. And they’ll have members of that U.S. team join their studio programming throughout the month, and feature exclusive content of NHL Network personalities and current NHL players discussing the 1980 Olympics on their social media feeds throughout February. And a particularly notable feature comes Feb. 21, when they’re taking NHL Now to cover the Team USA reunion. Here’s more on that:

NHL Network’s daily studio show NHL Now will air from Team USA’s reunion celebration in Las Vegas on Friday, February 21 at 4:00 p.m. ET. NHL Network host Tony Luftman and analyst Brian Lawton, who played for Team USA head coach Herb Brooks as a member of the 1987 Minnesota North Stars, will be on-hand to interview members of the team about their winning experience in Lake Placid, New York 40 years ago.

So there’s a whole lot of anniversary content coming up on ESPN, NBCSN, and NHL Network, and those interested in coverage of that anniversary will have plenty to choose from.