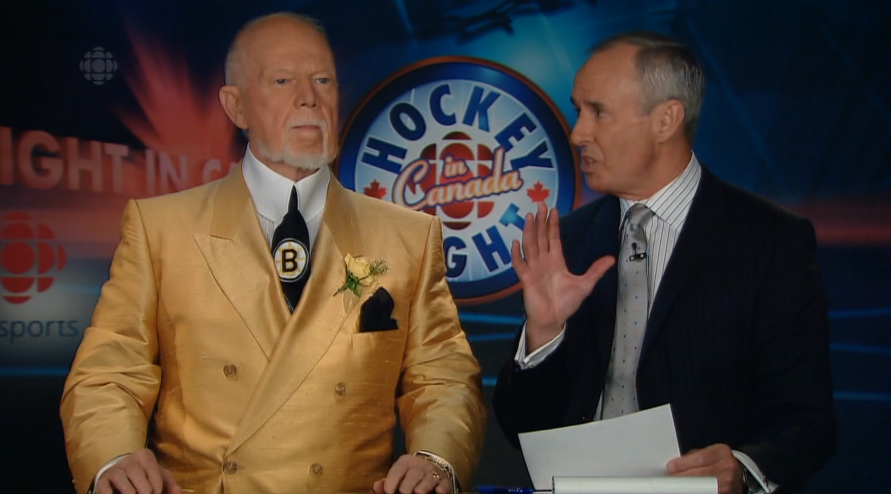 The 82-year-old analyst has agreed to a multi-year deal with Rogers that will keep him on ‘Coach’s Corner’ for at least the next couple of years, reports the Canadian Press. Cherry’s current deal was set to expire at the conclusion of the NHL playoffs.

Rogers Sportsnet seems to be keeping the audience favorite Cherry around, despite making changes elsewhere. Rogers axed NHL production head Gord Cutler in April amid falling ratings. The broadcast team has largely been hit and miss but fans have stuck around to see CBC holdovers Ron MacLean and Cherry continue ‘Coach’s Corner.’

Cherry is beloved in Canada and has been doing ‘Coach’s Corner” for more than thirty years. He’s earned his keep as a Canadian icon. Even though he’s gained plenty of respect and admiration throughout the years, he’s made multiple on-air comments which would get any broadcaster without the clout he has in big trouble.

Cherry has made multiple remarks, whether he’s attributing a player’s aggressive style to their Irish heritage, or making disparaging comments about ‘foreigners’ taking spots in the Canadian Hockey League, that have been xenophobic and entirely inappropriate. Cherry is no stranger to saying controversial, politically incorrect things and in this day and age, it’s hard to listen to. His rants can sometimes be the sports broadcast version of “old man yells at cloud.”

Rogers can live with the bad as long as he’s still one of the biggest faces and voices in Canadian hockey. Signing him to a multi-year deal is a no-brainer on their part, considering how much he’s loved by the old-time hockey crowd. Rogers might be experiencing changes but ‘Coach’s Corner’, for better or worse, will continue to live on with Cherry and MacLean.