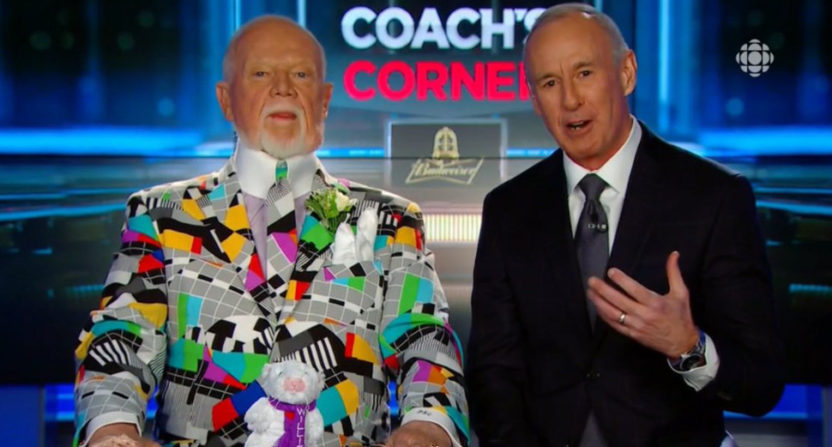 Viewers of the Hockey Night In Canada broadcast of the Toronto Maple Leafs-Boston Bruins game on CBC Saturday got some unexpected commentary on global warming to start off the first intermission. Analyst Don Cherry, wearing a kaleidoscope, a test pattern, or possibly a board game, went off on cold temperatures in Canada and Ontario forecasting groundhog Wiarton Willie seeing his shadow, and appeared to suggest to host Ron MacLean that the recent weather trends disproved global warming:

Cherry says “Six more weeks of cool weather. Now, I’d like to ask you with your left-wing pinko friends, what about the warming trend? Now where has that gone now? You know all about that.” MacLean responds “You really want to get into that?” Cherry says “I’m just asking where the cuckaloos are who say there’s a warming trend. We’re freezing to death!” MacLean then says “We’re not totally cuckaloos, if you look at some of the things going on in our world, but I will admit it’s nice to have a real winter.”

This is far from the first time Cherry’s tried to cast doubt on global warming on-air, as he had a back-and-forth with environmental activist David Suzuki in 2008:

“Left-wing kook! You’re in Vancouver, it’s warm out there! Why don’t you come to Toronto? We’ve been freezing for two months, records set, what is this warming trend? We’re all dying of cold, and he’s talking warming trends!”

Cherry has long been known for rants about everything from “left-wing kooks” to aid to Haiti to war in Iraq to female reporters to Tim Tebow to “Europeans and French guys” wearing visors. But these comments appeared to strike a particular nerve, including with Canadian federal Minister of the Environment and Climate Change Catherine McKenna:

For hockey you can turn to Coach's Corner if you want, for climate change, Canadians turn to scientists.

But Don Cherry might want to think about all those kids who might not have outdoor rinks to play on some day. #CLIMATECHANGEISREAL https://t.co/ObVwwYLiAr

And they sparked plenty of angry viewers complaining:

Here's the thing
Don Cherry (as much as he is a Canadian Icon and is loved) should not be on television.
He knows hockey, yes
And literally nothing else of the world right now but can't help himself from commenting.
He is unbelievably expired.

at this point @hockeynight putting don cherry on television is legitimately irresponsible.

The response to Cherry being controversial has been pretty limited before, and the CBC now has the advantage of saying he’s not a CBC employee (which their official account tweeted as a response to one critic in 2016). Thanks to Rogers taking over NHL rights ahead of the 2014-15 season, that appears to be true; games are still shown on CBC, but those are now Rogers productions, and Cherry’s multiyear extension in 2016 was with Rogers, not with the CBC. But the CBC never really cracked down on Cherry while he was under their purview, preferring to embrace controversy and debate. And the most likely outcome of this seems to be Rogers taking the same approach. But we’ll see if Cherry’s global warming comments do produce any hot water for him.