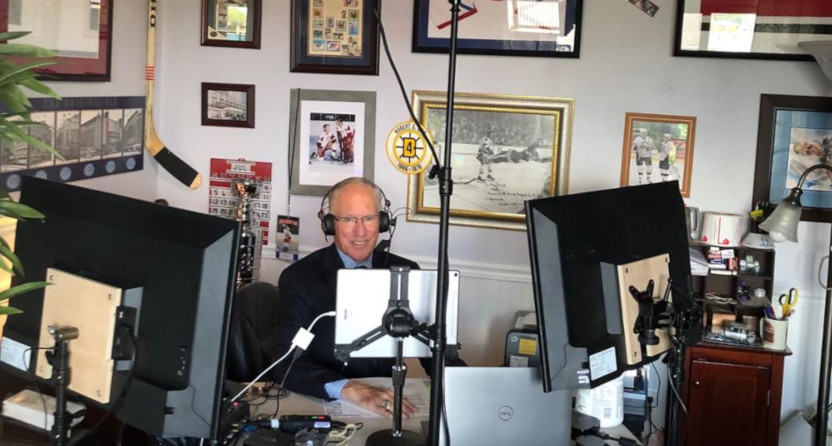 Many games across sports are being called at least partly remotely this year, even more than we’ve seen in the past few years. COVID-19 precautions to minimize the numbers of people in a stadium and the number of people travelling for games are often cited as a reason there, but there are some financial incentives to go that way as well. With NBC’s coverage of the Stanley Cup playoffs this year, though, most of the announcers and analysts have been on site in Toronto or Edmonton in the later rounds, and health concerns are the main reason 74-year-old lead NHL on NBC announcer Mike “Doc” Emrick has been calling games from his home studio in Michigan (seen above, via NHL.com) throughout the playoffs.

Emrick’s work from home includes the ongoing Stanley Cup Final in Edmonton between the Dallas Stars and the Tampa Bay Lightning (Game 6 is Monday night at 8 p.m. Eastern). He spoke to Uproxx’s Ryan Nagelhout recently, and said the challenge for him in adapting to remote work hasn’t been in what he’s able to see, which carries some of the same challenges you’d find from an arena broadcast booth (particularly when it comes to the identity of players in the far corners). Instead, he said it’s in the lack of pregame and postgame interaction with coaches and players (which he would be missing thanks to COVID-19 protocols even if he was in the bubble):

The same limitations that I was having in the arena were the same ones I would be having on the screen.

…2020 is odd for all of us and not because I’m at home but because the joy of covering a playoff is being close to players and after the pack peels away, going and sitting down next to a player in a dressing stall and asking a question about something you’ve been curious about and all of a sudden you get a story that you wouldn’t have gotten otherwise about a player’s background that you can use in your telecast. And there’s no chance of that this year because we have no access to dressing rooms. Any interviews you get with players are all public, which I get with the rest of the media.

There’s hardly any camaraderie with the rest of the reporters you would be with anyway because very few, there’s only one reporter permitted per media source. And so all of the camaraderie you’d have with the print guys and all the other electronic media guys you would normally see. That’s different. The time you get with coaches is limited compared to what it’s been. And that’s not to say it’s wrong, it’s just necessary. And that’s different too.

The whole interview is worth a read, and Emrick’s discussion of remote broadcasting is longer and more nuanced than the excerpts above. He mentions that there were some adaptation challenges at first, especially for games where he’s been at home, where analyst Eddie Olczyk has been in NBC’s studios in Connecticut or Chicago, and where they’ve been working with an inside-the-glass correspondent (Pierre McGuire or Brian Boucher) on the ground in Toronto or Edmonton. For the Final, Olczyk, Boucher, and McGuire are all in the arena in Edmonton, with Emrick calling the game from his home studio.

But Emrick says they’ve adapted to that situation pretty well, and the lag has been quite minimal (“well under half a second”) even when their broadcast team has been scattered around the continent. (And NBC’s Sam Flood said earlier this month that the lag’s decreased even more lately thanks to sending the on-site truck feed directly to Emrick rather than through their control room in Connecticut first.) So it’s good to hear that things are working out for him on the technical side.

And it’s interesting to hear Emrick talk about the real loss being those day-to-day interactions, which aren’t really happening this year even for media in the NHL bubbles. (And limits on which media can even be in those bubbles have often been pretty restrictive, especially at first.) So being there might not help much anyway. It’s also notable that the actual broadcasts seem to have gone pretty smoothly for Emrick and his crew despite the different locations, and that matches up with some of what Olczyk said about the setup on a July conference call previewing NBC’s coverage:

“It’s up to us to sell it, and to engage our fans and the fans of the National Hockey League. I talked about the unknown of the qualifying rounds, and it really is, it’s up for grabs.  Players and teams and coaches will react differently. But our fans are just really wanting to see hockey again, and we’re going to give it to them. And it’s up to us, whether it’s inside the bubble as Bouch [Boucher] is right now, and eventually I’ll be there, or calling a game from a monitor, working with Doc, we’re going to work it out. We’ve worked long enough together that I really believe we’ll be able to have the same cadence or symmetry. Once we get through a game or two, it will be just like we’re sitting together. I don’t think anyone will notice.”

Of course, that doesn’t mean that remote broadcasting is the right fit for every event, even in a pandemic year. The NBA opted to have most of its national announcers on location (albeit kept away from the players) for its conclusion to the regular season and playoffs, and that seems to have generally worked well. Some of MLB’s remote telecasts haven’t worked out all that well, and AA’s Joe Lucia made good points about how that sport could perhaps use consistent on-site crews throughout the playoffs. (It seems we may not get that, though, at least in the early rounds.)

It’s also notable that while Emrick told Nagelhout the shift to video monitors hasn’t affected what he can see much, Olczyk said in that July conference call that remote games do present some specific challenges for analysts, who are looking to pick up details that happen behind the play and away from the cameras. So even generally-positive comments like this from Emrick shouldn’t be seen as rationale for networks to go to even more remote broadcasting even once there’s a COVID-19 vaccine; there still are losses from announcers not being in the arenas, and those will become even more protracted in an era with fans in the stands and easier access to players.

And NBC seems to recognize the value of having on-site announcers even amidst these restrictions; after all, they have Olczyk, Boucher and McGuire all in Edmonton for these games. And that’s something other networks should keep in mind; remote broadcasting makes some sense at some times (especially during a pandemic), but it comes with tradeoffs and losses (perhaps especially for the analysts). And it shouldn’t become just an overall norm even post-pandemic.

But given the particular situation this year, it’s great that NBC has been able to set up this home studio for Emrick, and that they’ve been able to keep him involved with their playoff coverage in a way where he can be safe and comfortable. Emrick has been calling national games since 1986 (with ESPN), and he’s been the lead national announcer for Versus/NBCSN/NBC NHL coverage since they got those rights in 2005-06. His calls are a big part of the playoffs for many, and they provide some familiarity even during such a strange year. And it’s good to hear that the remote situation has worked out pretty well for him, even if it’s far from the interaction and camaraderie he’d be experiencing in a more normal year.