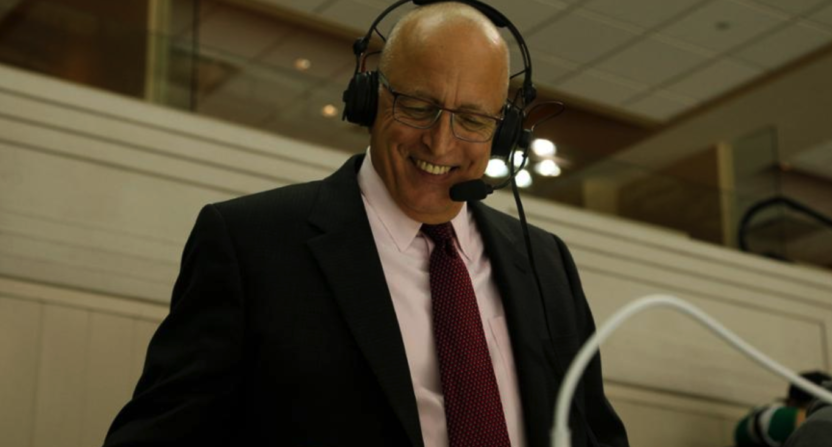 The Dallas Stars announced Sunday morning that play-by-play announcer Dave Strader passed away at the age of 62. Strader had been battling cancer for over a year and it was uncertain whether or not he would be able to broadcast any games for the Stars this season. He died at his home in Glens Falls, New York, according to the team.

Strader had been calling games for the Stars since the 2015-16 season. Following that season, he was diagnosed with cholangiocarcinoma, a form of bile duct cancer. He was limited to working five games for the Stars last season. After returning to the booth in February to call an overtime win, the Stars players saluted him at center ice. Strader went on to call three games in the Capitals-Maple Leafs first-round playoff series for NBC last season.

Known as “The Voice,” Strader was honored by the Hockey Hall of Fame earlier this year with the Foster Hewitt Memorial Award for his outstanding contributions as a hockey broadcaster. He will be recognized at the Hockey Hall of Fame NHL Media Awards Luncheon on Nov. 13 in Toronto, after which his award plaque will be displayed in the institution’s Esso Great Hall.

It is with sad news that we announce that Dave Strader has passed away this morning at the age of 62. pic.twitter.com/CMlpJAQn01

Prior to joining the Stars broadcast team, Strader spent four seasons with the Phoenix Coyotes, two of them paired with former ESPN analyst Brian Engblom (the two also worked together at ESPN in the late-1990s). Before his stint with the Coyotes, he worked two seasons on the Florida Panthers broadcast team while juggling national telecasts with NBC/Versus.

Strader ended up calling games for NBC full-time beginning in 2011 (his overall tenure with NBC included the 2006 and 2014 Winter Olympics) until moving over to the Stars broadcast team. Additionally, he called national games in ESPN from 1996 to 2004, taking over for the late Tom Mees, also getting the opportunity to scratch a longtime basketball itch and call play-by-play for college basketball, the WNBA, and NBA’s D-League.

The longest stint of Strader’s career was spent with the Detroit Red Wings, literally promoted from the minors in Adirondack (where he called games for seven seasons) to their broadcast booth in 1985. Stars president Lites actually hired Strader when he was with the Red Wings organization.

Strader was the Red Wings’ main play-by-play voice with analyst Mickey Redmond until 1996, leaving for ESPN just before Detroit’s back-to-back Stanley Cup championship seasons in 1997 and 1998. (Strader also called games for Fox and ESPN during his time in Detroit.)

Detroit fans still regarded him affectionately long after he moved on from the Red Wings. (Many lamented that he didn’t call those championship seasons after following the team leading up to that success.)

The entire Detroit #RedWings organization is saddened to learn of the passing of Dave Strader… pic.twitter.com/nPHK9Gdbzn

“Everyone who knew him, and everyone who was able to listen to him call games, is saddened to learn about the passing of Dave Strader,” Dallas Stars President and CEO Jim Lites said in an official release from the team.

“His voice is synonymous with hockey to fans all over the globe and he built a connection for so many fans to this game. More importantly, he was a tremendous husband, father, grandfather and friend and we will miss him deeply. Our sincerest prayers and condolences are directed to his wife Colleen and their entire family.”

Strader is survived by his wife, Colleen, three sons (Christopher, Casey and Trevor), and two grandchildren (Sydney and Charles).