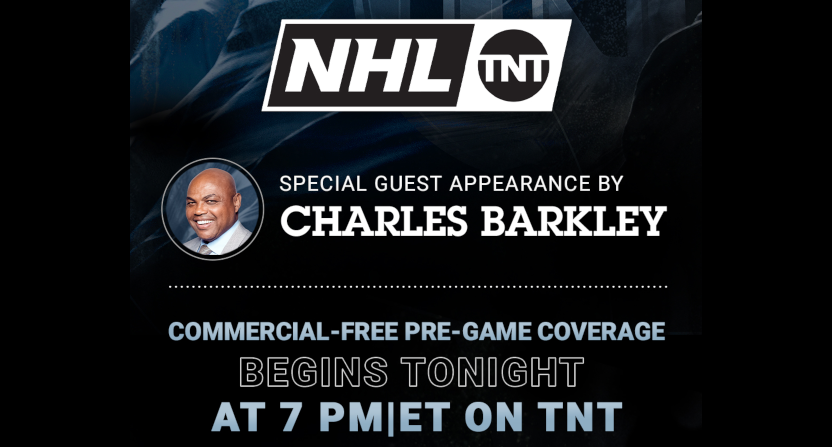 Much of the discussion around Turner Sports’ approach to the NHL has been around their studio show, and around comparisons to the success they’ve found with Inside The NBA. On Wednesday, the first night of their regular-season package (they have a doubleheader featuring Rangers-Capitals at 7:30 p.m. ET and Blackhawks-Avalanche at 10 p.m. ET), they’ll actually have a member of Inside The NBA joining them: Charles Barkley. Barkley’s long been known for his hockey fandom, which he’s talked about on both NBA and NHL broadcasts, and he played a key role in recruiting Wayne Gretzky to Turner. Here’s more on what’s ahead for him Wednesday from a Turner Sports release:

It’s also interesting that Turner is going commercial-free for the pregame coverage. That’s certainly a good way to get people to check out what they’re doing with their studio (which Barkley’s guest appearance will also help with), and it’s a good way for them to get into some of the longer and more in-depth discussions McHugh and Carter (who were both previously at NBC) were talking about on a media preview call last week. Here’s what they said there about how TNT’s studio show (which will also air during the intermissions) will differ from what they did at NBC:

“In general, the idea was we had a show, we had a format,” McHugh said. “We would go away from that format on occasion. But we would also at times, there were times where maybe the conversation could have drifted a little bit further, been, in my opinion, a little more entertaining and a little bit less about the Xs and Os of the hockey game and a little bit more about the personalities and the people. I’m not saying that was always the case, but it definitely did occur.”

“And that’s what interests me, personally, and I think it interests a lot of people at home. It doesn’t have to be every night, it doesn’t have to be every personality. But there are times, there’s a time and a place. And to me, I just felt like there were times where it was like ‘All right, we had a quick conversation about this, that’s it, we’re going to move on, we’re going to talk about the next thing that is on the agenda.'”

“It’s not a right or a wrong way, it’s just personal preference for me. I felt some of the more conversational elements of it suited what I do, and I’m hoping that’s what the fans want to see.”

Carter said he already saw that during the first preseason game they did, too.

“I think we noticed from the first game too. We had our rundown, we had five or six things that we were going to talk about, and we said on set, ‘If we get to the fifth or sixth thing, great, if we don’t, if we have this compelling conversation with the first two players we’re talking about, then so be it. We can always push that to later on in the post-game show or in the intermission.’ And some places, that isn’t the case, you have to hit every single thing on that rundown.”

So this more in-depth, conversation-focused approach is a goal for TNT’s studio crew. We’ll see what they do there Wednesday night, and we’ll see how Barkley fits in with them on the pre-game show.