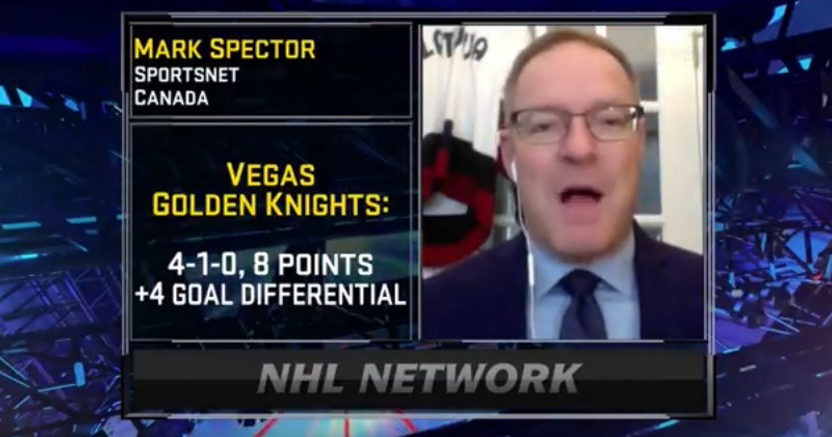 There’s a long and proud tradition of certain voices in the Canadian hockey media (particularly ones that start with “Don” and end with “Cherry,” but there are many others) bashing non-Canadian players for everything from on-ice play to comments to the media, and Sportsnet columnist Mark Spector has the latest hilarious blunder along those lines. Washington Capitals’ star Alex Ovechkin, who is Russian, recently guaranteed a Game 3 win (he was correct) in their first-round series against the Columbus Blue Jackets and a further Game 4 win, and he’s dropped plenty of guarantees before.

TSN Radio 1260 (Edmonton) host Dustin Nielson commented on this, and Spector replied with a since-deleted tweet:

Ovi said they would be tied up going back to Washington. If he was a Canadian this would be a big deal…but he's not…so…meh.

Fortunately, we caught it in our Slack channel before he deleted it.

You can just hear Cherry saying the same thing. “Aw, yeah, a good Canadian boy wouldn’t do that, eh? Not like those cocky foreigners! Beauty! Let’s go!” And the “in the first round” is notable, as an Edmonton-based columnist like Spector would certainly never dare to criticize guarantees overall, given that the Edmonton-sainted Mark Messier delivered the most famous one. (Even if it was for the Rangers rather than the Oilers.) But, as much of the internet pointed out to Spector, this take was not only hot and jingoistic, it was factually incorrect, considering that a Canadian player made a similar guarantee just this week:

Oh word? You sure about that chief? https://t.co/WlkvfDy4A2

Claude Giroux guaranteed a game 4 win in the 1st round in 2014, and again *yesterday* for this year's game 5.

How did these Canadian Guarantees work out? pic.twitter.com/c0gI4kTbgF

Look, arguing about guarantees is pretty dumb in general, but what’s even dumber is suggesting that only “those people” do it. Especially when there’s plenty of evidence to the contrary. But this means we can induct Spector into the jingoistic Canadian take Hall of Fame, where he can hang out with Cherry, and the factually-incorrect one as well, where he can grab some hot dogs with Steve Simmons. And they can all talk about how much they love guys who play the game “the right” (read: their preferred) way, and how much better everything used to be.