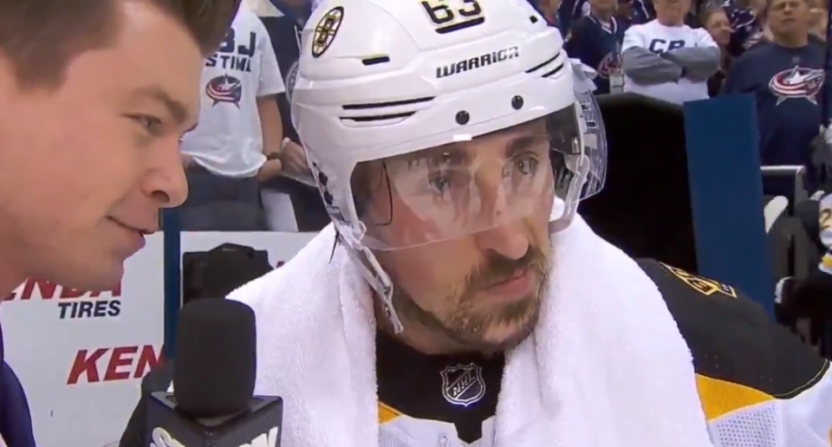 Boston Bruins’ forward Brad Marchand has often been controversial with both other players and with the media, and he went full Gregg Popovich on CBC/Sportsnet interviewer Kyle Bukauskas Monday after the Bruins clinched their conference semifinal series against the Columbus Blue Jackets with a 3-0 win in Game 6. Marchand responded to three questions from Bukauskas with just 10 total words:

Bukauskas first asks “Brad, you said after the third game of this series there’s no panic in the room. What can you say about how your group handled the next three games and ultimately advancing to the conference final?” Marchand responds “We did a good job.” Bukauskas then asks “You know, [goalie] Tukka Rask was saying this core isn’t getting any younger. What do you make of the opportunity that lies ahead of you?” Marchand says “It’s been fun.” Bukauskas then says “So, I see where this is going here. I’ll ask you one more about your line, they got back together. You had said the chances over there were just starting to bear in these last few games. What kind of zone are you three in?” Marchand says “We’re good,” and moves away, and Bukauskas says “Thanks,” and throws it back to play-by-play announcer Jim Hughson with a “Well, that was worth it, Jim!”

This appears to have come from developments earlier in the series, as Marchand stepped on and broke Columbus foward Cam Atkinson’s stick ahead of an overtime faceoff in Game 1. Marchand wasn’t penalized, and he later said “I think he was trying to dull my blade there. Send me to the room, get it sharpened. It’s kind of rude of him to do.”  Bukauskas asked Marchand “Did you manage to get your skate resharpened after Thursday?” and Marchand skated away:

Here’s the video of an earlier (in the series) exchange between Kyle Bukauskas and Marchand that some believe is the reason for this type of response. pic.twitter.com/xVx5yAXbZs

But hey, it appears Marchand extended that treatment to the rest of the media after Monday’s game as well:

Brad Marchand just took about 15 questions from reporters and didn't give an answer longer than five words.

And, as expected, a lot of media members weren’t happy about Marchand’s actions:

What the hell was that between Brad Marchand and Kyle Bukauskas?

Bruins’ Brad Marchand acts like a total jerk yet again in postgame interview with @SNkylebukauskas. Not a surprise. Marchand an embarrassment to NHL.

For all the "Bunch of Jerks" talk from the old guard, the Hurricanes' celebrations are fun. Brad Marchand's antics in these interviews are just plain rude.

So, “Little Ball of Hate” Brad Marchand versus the media should be a fun storyline to watch heading into the conference finals. But a similar approach didn’t work out all that well for Russell Westbrook.