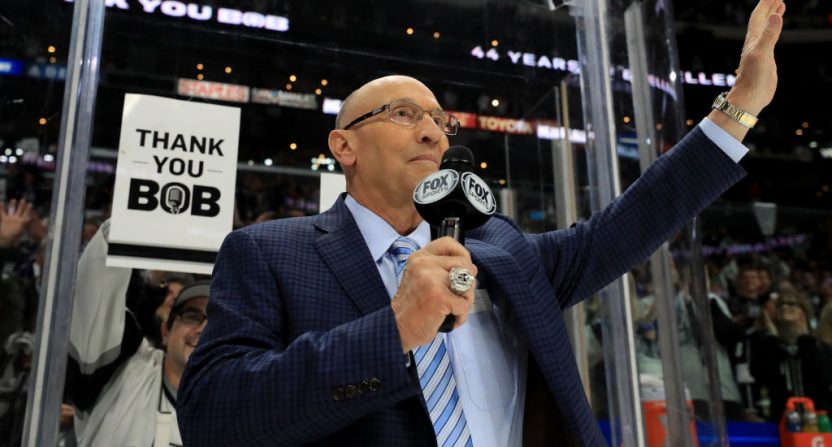 While this sendoff to a beloved LA sports announcer won’t get nearly the same press as Vin Scully’s farewell tour did last year, Bob Miller’s final home game as the voice of the Kings ended in much the same way Scully’s final Dodger home game did, which is to say, perfectly.

The man who has been with the Kings for 44 of their 50 seasons will be retiring after Sunday’s game in Anaheim, and yesterday’s game against the Blackhawks was his final one at Staples Center. The game meant nothing for the Blackhawks, who were already locked into the West’s #1 spot, and for the Kings who had been eliminated from the postseason earlier in the week. But, that didn’t matter to Miller, or the sold out rink where everyone held “Thank You Bob” signs. Fittingly, the game went to overtime, and even more fittingly, it ended like this:

That’s about a perfect a call as you can get. And to make it even better, FOX Sports West had a camera on Miller as the play unfolded, so everyone could watch his reaction. If it was perfect that Vin Scully’s final Dodger home game ended with a walk-off winner, it’s fitting that Miller’s final home game ended with an OT winner.

Miller also had a letter to read out to Kings fans on the air after the game finished (text is below, courtesy For The Win):

? Bob Miller reads his letter to YOU! Yes, you @LAKings fans. #ThankYouBob pic.twitter.com/ZOCA8zOq2l

To all Kings fans,

Today marks my final home telecast here at Staples Center. I plan to do one more regular-season game, tomorrow at Anaheim. I want to thank all of you for making my 44 years with the Kings so enjoyable.

I appreciate all the support and positive comments you have so kindly sent my way. I have always enjoyed meeting in person with so many of you. I will always remember the thrill of all of us cheering as the Kings set numerous records and won their first Stanley Cup in 45 years in 2012. It was a magical time as I watched and listened to all of you scream and holler, cry and shout with joy as you realized we were all involved in something we thought we might never see: The Kings hoisting the Stanley Cup.

I remember removing my headset several times just to hear you roar following a Kings goal or a victory. I will always remember seeing hundreds of thousands of you lining the streets of downtown Los Angeles and cheering the Kings players as the open-air buses rolled by with the Stanley Cup displayed.

I’m sure all of you thought, ‘At least we’ve seen them win one, and we’re satisfied.’ Then, unbelievably, the Kings did it again, two years later in 2014. Two Stanley Cups in three seasons. Who would have believed that?

I have seen the Kings’ fan base grow by leaps and bounds, starting with the great years of Rogi Vashon, Butch Goring and the Triple Crown line. And then the acquisition of Wayne Gretzky in 1988, a trade that put the Kings in the forefront of the NHL.

I have been fortunate to be able to do something I’ve always wanted to do: Bring the thrills of Kings hockey to all of you loyal fans. We have been through ups and downs together, but you always remained faithful. My family and I sincerely thank you for making these years the best of our lives. Your loyalty and support of the Kings is outstanding, and I hope we can all see the Stanley Cup skated at center ice once again.

.@cubagoodingjr speaks about how the LA Kings will never be the same without Bob Miller. #ThankYouBob pic.twitter.com/EPCsvmUIRq

In case you want to reminisce a bit, here’s a video with Scully, Miller and the late Chick Hearn from 2000, because LA had it so good with amazing broadcasters for so long:

And finally, famous broadcasters, including Scully, pay tribute to Miller below:

Miller might not have Scully’s fame or reputation that crosses over to the average sports fan, but he’s certainly equally beloved. He’s retiring after repeated health issues including a stroke he sadly suffered during All-Star Weekend in January. Here’s to a happy and healthy retirement.