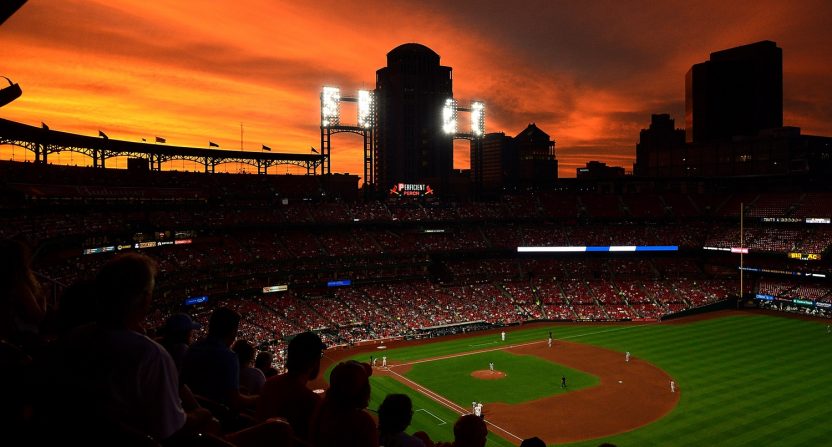 Are the blackout rules in those other sports less restrictive than those in baseball, or am I just so out of touch with NBA and NHL fanbases that there are rampant complaints, but I’m just missing them?

Ian’s piece about Blue Jays fans across Canada getting screwed over by MLB.tv and Sportsnet got me thinking, and I did some quick and dirty research into whether or not some battlefield MLB markets were also battlefields for the NHL and NBA.

Starting with Iowa and rolling down some of this list from last year that went viral again this week, I used a random  zip code from the area in question’s largest city (that’s how we’re gonna do this, folks), and ran it through the blackout checker for the NBA, NHL, and MLB. The results were somewhat illuminating.

Okay, we already have a situation where MLB’s blackout policy is the most onerous, but fans of all sports are getting screwed. In Iowa, all of the Chicago and Minnesota teams are blacked out across all three sports. Because there are two Chicago MLB teams, two fanbases are screwed over. The Royals are Kansas City’s only franchise in the three sports in question, so MLB is the only sport effected there. St. Louis doesn’t have an NBA team, but their NHL team (like their MLB team) is blacked out. However, while the Milwaukee Brewers are blacked out in Iowa, the Milwaukee Bucks are not – this is because of the presence of the Indiana Pacers, a city with only an NBA team and not an NHL or MLB team. Weirdly, Milwaukee is closer to Iowa than Indianapolis, so I have no idea how Iowa is considered Pacers territory and not Bucks territory.

Vegas is an area where the NHL has a massive advantage, since the Golden Knights are the only game in town and have exclusive coverage of the territory. Six MLB teams claim the market (two in the greater LA area, two in the Bay Area, one in Phoenix, and one in San Diego), though San Diego doesn’t have an NBA team to stick their finger in the pie. The Phoenix Suns don’t get into Vegas while the Diamondbacks do, and while the Warriors don’t, the Kings do. This is a situation, like in Iowa, where MLB’s extra teams in a region make the blackouts appear much worse. San Diego is a market that, like Kansas City, only has a baseball team among the three sports in question and the Bay Area, like Chicago, has two MLB teams instead of just one NBA and NHL team.

I was born and raised in this area, and all of the blackouts actually (gulp) make sense. Furthermore, we’re only talking about three (grouping DC and Baltimore together) markets, all located between an hour and a half and three hours of the blackout market in question. But once again, MLB looks worse than the other sports because of two teams in Baltimore and DC, compared to just one in both the NBA and NHL (and no Pittsburgh NBA team)

This is another situation similar to Vegas. Buffalo doesn’t have an MLB or NBA team, but they do have an NHL team that gets all the spoils in the region. The two New York City teams in both the NBA and MLB are blacked out in Buffalo, but the inclusions of the Indians (NBA team) and Pirates (no NBA team) once again make MLB look bad.

Philly is a clean sweep across the board for Scranton, as is Pittsburgh for its MLB and NHL teams. The New York situation is weird: both MLB and the NBA black out both NYC area teams, but the NHL only blacks out the Rangers. The Prudential Center is closer to Scranton than Madison Square Garden, and Devils games aren’t blacked out in the area, nor are Islanders games. Alright. Sure.

This one is brutal. The NHL and NBA have teams in Raleigh (Hurricanes) and Charlotte (Hornets), giving them the Charlotte territory. MLB has nothing in the entire state, leading to *four* teams claiming the area: the Baltimore/Washington-based Nationals and Orioles, the Braves, and (for some reason) the Reds. But again, this comes down to where those other leagues have sports and MLB doesn’t: neither Baltimore nor Cincinnati have an NHL or NBA team, and with no MLB involvement in NC, the market turns into open season.

The Blue Jackets, the lone pro team in Columbus, have the NHL’s exclusive local rights for the city. Cleveland’s two NBA and MLB teams also claim the city, as does Cincinnati’s one team. And just for the hell of it, let’s throw in the Pirates too.

The Pacers are Indy’s one non-NFL team, so they box out the NBA’s other teams in the region. Chicago takes a chunk out of Indy’s market as well, and with two MLB teams in the city, it’s double trouble for blackouts. The Reds sort of make sense based on their distance from Indianapolis, but I have zero clue why Blues games are blacked out and Blue Jackets games aren’t.

The NBA is the one of these three leagues with a pro franchise in the city, giving them rights. The Stars are the region’s closest NHL team, so they’re sort of blacked out by default. MLB claims it for both the Astros and Rangers, and since neither city’s NBA team can claim the city, MLB once again looks like a bunch of doofuses.

I think Orlando is a perfect city to talk about how much stricter MLB’s blackout policy is than the other leagues. Orlando has an NBA team, so of course, they’ll be the prime NBA tenant in the city. But look at MLB and NHL – each league has a team in the Miami area and in the Tampa Bay area. Both MLB teams are blacked out in Orlando, but only one NHL team (the Lightning) is. The weird part to me is that Sunrise, where the Panthers play, is closer to Orlando than Marlins Park and Miami proper. Yep, that decision makes sense!

MLB doesn’t come off too awful here, considering that blacking out either the Mariners or the Bay Area duo would cross multiple states and more than 700 miles. That being said, even though Utah and Arizona are neighbors, Salt Lake City isn’t exactly a quick drive away from Phoenix.

MLB finally wins a blackout battle, largely because even they’re not crazy enough to try to say Newark is Phillies country.

You can see where this is going. The Thunder take all of the region in the NBA, while the further east you go, you can also add the Mavericks and Grizzlies. The Dallas-based MLB and NHL teams are blacked out across the area. Kansas City doesn’t have an NBA or NHL team, so throw them in the mix too. The Cardinals and Astros are both blacked out, but the Blues and Rockets aren’t. It’s getting tough to defend MLB.

This is just like Charlotte – MLB doesn’t have a team in Tennessee, the NHL and NBA do, and MLB’s blackouts suffer as a result. The Hawks and Blues aren’t blacked out in Memphis because the Preds and Grizz exist, and hey, let’s call Memphis Reds Country too, because why the hell not?

What also struck me as somewhat interesting is what happens in the cities that only have MLB teams. Do the other leagues have three, four, five, or sometimes six teams taking a bite out of the region?

Nope, just the DC teams that share the territory.

Alright, so what have we learned today? Blackouts aren’t just an MLB thing. NBA and NHL fans have to deal with them too. However, the blackouts in those two sports make much more sense than MLB’s blackouts, which can end up traveling hundreds of miles across states and inconveniencing fans for no reason.

MLB’s blackouts also seem worse because of how concentrated their teams are in major markets. Yeah, all three leagues we’ve discussed today have two teams in both the New York and Los Angeles regions (tack on a third for MLB in LA and the NHL in NY, depending on how you feel about San Diego and Newark), but MLB is the only one with two in either Chicago, the greater Baltimore/Washington area, or the Bay Area (and they have two teams in both!). That means that when one of those teams is blacked out in an area, they’re both blacked out, making the blackout hit even worse.

Furthermore, MLB’s blackout areas frequently overlap with one another, which seems to be a consequence of not having teams in some of the areas where the NBA and NHL do have teams (SEE: Vegas, Charlotte, Buffalo, Columbus, etc). It’s absurd to me that three different MLB markets (again, lumping DC and Baltimore together) can claim Charlotte, especially when two of those markets are 400+ miles away. The situation in Iowa is awful with so many midwest teams planting their flag, but at least only one of those cities (Indianapolis) is more than 400 miles away from Des Moines.

Blackout restrictions aren’t going to be completely removed any time soon. That would help destroy the RSN model that has given MLB teams billion dollar TV deals. But it wouldn’t hurt MLB to loosen the restrictions and tighten their viewing areas a little more. That wouldn’t be a cure-all situation for baseball, but who would be hurt if the Reds aren’t blacking out fans from Toledo to Charlotte, or the Diamondbacks stop thinking they’re Salt Lake City’s MLB team? If anything, it might actually help the league and placate the concerns of some fans. You can’t please everyone, but cutting down on multiple crossover blackout areas would be a fine start.