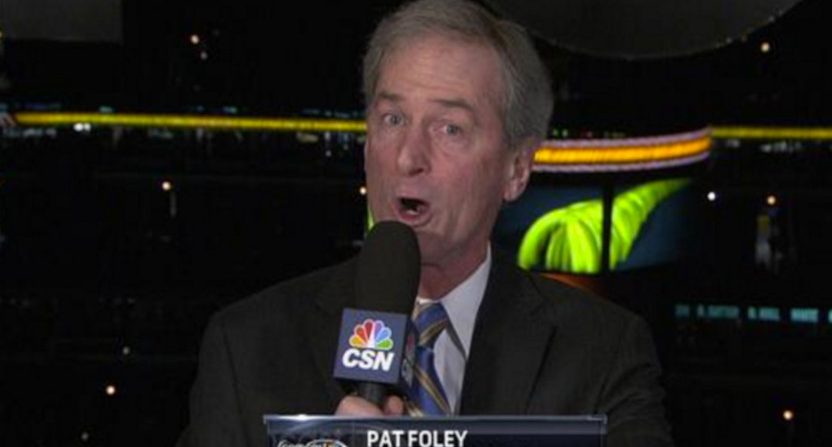 Long-time Chicago Blackhawks’ TV play-by-play broadcaster Pat Foley has taken criticism for a comment he made on-air during their preseason game in Germany against Eisbaeren Berlin Sunday, and he’s now offered an apology.

During the third period of the NBC Sports Chicago broadcast, Foley mentioned Eisbaeren player Austin Ortega and said he “sounds like he ought to be a shortstop”:

“Ortega, sounds like he should be a shortstop” instead of hockey

Fantastic subtle racism by @NHLBlackhawks and @NHLonNBCSports play by play Pat foley.
Cause we Latinos don’t hear this enough on the ice already
Now On #latinoheritagemonth@NHL workin hard to be inclusive again pic.twitter.com/iqgqVSX226

Here’s some of the further Twitter criticism Foley took for this:

This got out on Bears Monday. Hockey benefits from being a niche sport. The game is growing and hockey culture needs to adapt.

The Blackhawks have done a lot of outreach in Chicago’s black and brown communities.

That inraged me as a pat Foley fan how many times my teammates Godinez and Diaz herd shit like that, or I was told to go join the spelling bee growing up then to hear it in an NHL broadcast set me the fuck off

This is an obvious misstep by Foley, and a veteran announcer should have known better. Announcers have been getting in trouble for stereotypical last name references for quite a while, from Bob Griese’s 2009 comment that Juan Pablo Montoya “was out having a taco” to Rod Allen’s 2011 comment that the Tigers’ post-game meal should include rice and beans (because they had Latino players in their lineup, you see) to Jorge Andres’ 2013 comment that Jeremy Lin was “cooking with some hot peanut oil.”

It’s also disappointing that it took Foley and the Blackhawks two days to address this; as per Jimmy Greenfield of The Chicago Tribune, both Foley and the team both offered apologies to Ortega and Eisbaeren Tuesday:

Ortega, who was born and raised in California, elected not to speak with Foley directly. Foley spoke with a member of the Eisbaeren organization, who passed on the apology to Ortega.

The Hawks released the following statement: “We are aware of the insensitive remarks made by play-by-play announcer Pat Foley on Sunday’s broadcast. Pat has personally spoken to the Eisbaeren organization to express his deep regret. He and the organization sincerely apologize to Austin Ortega and Eisbaeren and will not be commenting any further on the matter.”

Foley, 64, called Blackhawks games from 1980-2006 before he was replaced by Dan Kelly Jr. He returned to the team’s TV broadcasts in 2008 and has been there since. He also called NHL on Fox broadcasts in the 1990s, and was given the Hockey Hall of Fame’s Foster Hewitt Memorial Award in 2014. Ortega, 25, was born in Escondido, California, and played for teams including the University of Nebraska-Omaha Mavericks, the AHL’s San Diego Gulls, the ECHL’s Utah Grizzlies, and the Swedish Hockey League’s Växjö Lakers before joining Eisbaeren last season.