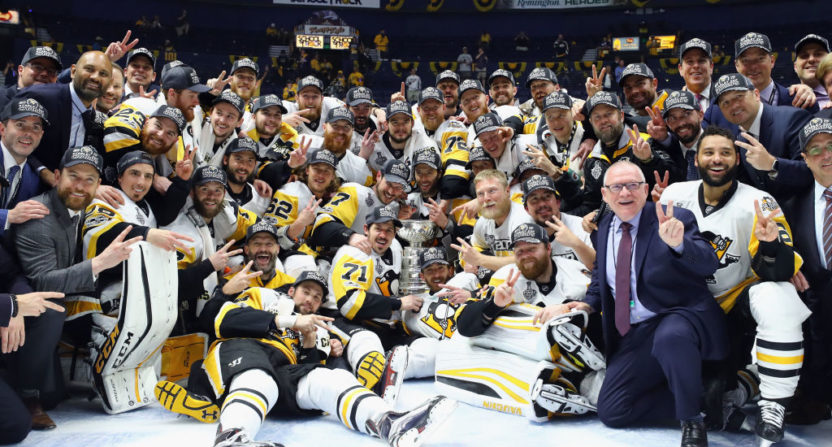 The Nashville Predators-Pittsburgh Penguins Stanley Cup Final brought NBC Sports better numbers than last year’s Penguins-San Jose Sharks Final. Despite not having an Original Six team, the series averaged 4.7 million viewers on NBC/NBCSN and its digital platforms. That compares to the 3.9 million average for Pens-Sharks last year. That’s a 19% increase from 2016.

The Game 6 series clincher averaged a total audience of 7.09 million viewers on NBC and its digital platforms. That was up 29% from last year’s Game 6 which also clinched the Cup for the Penguins.

Sports Media Watch notes that Sunday’s Game 6 averaged the 6th-largest Stanley Cup Final audience dating back to 2003. And it’s the largest for a non-Original Six team.

Locally, the Top 10 markets for the series included Pittsburgh and Nashville of course, but also had traditional NHL markets like Buffalo, Minneapolis-St. Paul, Philadelphia and Denver, but also non-traditional markets like Richmond and West Palm Beach:

As for the entire Stanley Cup Playoffs, the 84 games across NBC, NBCSN, CNBC and USA Network averaged 1.387 million viewers and that’s up 11% from 2016. This year’s playoffs had five Canadian teams as compared to last year which had none. And this is the ninth consecutive year that the Playoffs has an average audience of more than 1.2 million viewers.

So NBC can be pleased about the larger audiences for the Stanley Cup Playoffs. Having a slew of overtime games in the first three rounds certainly gave some compelling hockey to viewers and perhaps that led to the bigger numbers this year.