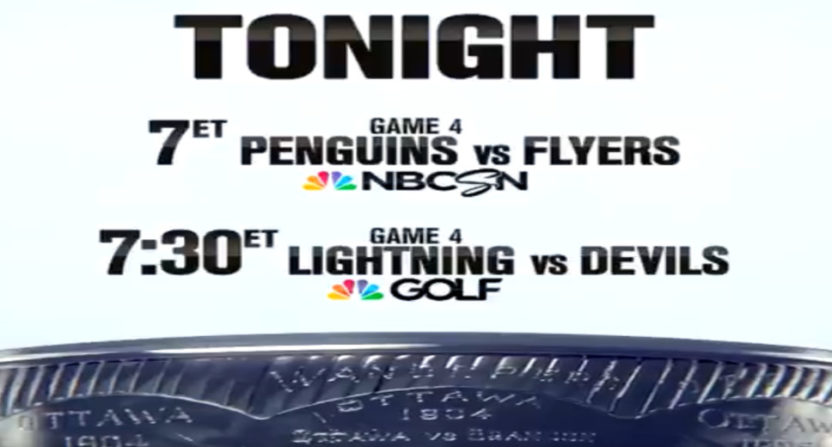 What’s the difference between the San Jose Sharks and Shark Tank? Well, one can clinch their first-round playoff series against the Anaheim Ducks tonight, but reruns of the other will be seen on CNBC. As mentioned earlier this month, Golf Channel will air NHL playoff games for the first time Wednesday, showing the Tampa Bay Lightning-New Jersey Devils game (the Lightning lead that series 2-1) at 7:30 p.m. Eastern and the Anaheim Ducks – San Jose Sharks game (the Sharks lead that series 3-0) at 10:30 p.m. Eastern. (That game may start elsewhere if the first one goes to overtime.)

Why are these games are airing on Golf? Well, USA and CNBC both passed in favor of other programming, including Law and Order: SVU reruns, a new episode of Suits, the 1990 film Pretty Woman (USA), Shark Tank reruns, and a new episode of Staten Island Hustle (CNBC). (NBCSN is showing Wednesday’s other playoff games, the early game between the Pittsburgh Penguins and Philadelphia Flyers and the late game between the Nashville Predators and Colorado Avalanche.)

Now, of course, broadcasters have no obligation to put particular programming where it can be seen by the most people, and sometimes they choose less-prominent channels to justify those channels’ per-subscriber fees and get more people to subscribe. That’s why we wind up with things like Stanley Cup Final games on NBCSN, LCS games on FS1, and the Final Four on TBS, instead of those events airing on the associated over-the-air networks with wider distribution. But according to a piece Kevin Allen wrote for USA Today (and which NBC Sports PR even retweeted), the issue here isn’t so much trying to bolster Golf Channel as it is executives at CNBC and USA preferring their own programming over these particular NHL playoff games:

“Since we began televising every game of the Stanley Cup Playoffs in 2012, we continue to receive great cooperation from CNBC and USA Network, who will air several nights of playoff games this year,” said Jon Miller, president of programming for NBC Sports & NBC Sports Network. “However, because of programming conflicts on Wednesday — for the first time we will extend coverage to Golf Channel.”

…But here’s what we discovered: CNBC and USA Network may be owned by the same conglomerate, but the stations control their own programming.

USA Network is showing the series Suits at 9 p.m. tonight, and that is one of its higher rated shows. CNBC is showing Shark Tank reruns from 7-9 p.m, another popular show for the network.

That article is also great for its description of Golf as “a major 24/7 player in cable” (with the network providing an even lower estimate than Nielsen does), and with the comparison of NBA TV (and December numbers! As if the month-by-month ones aren’t regularly written about!) for some reason:

Golf Channel is a major 24/7 player in cable, appearing in more than 70 million households, according to the network. NHL Network’s reach is significantly less. According to a December 2017 AdAge article, NBA TV, where several NBA playoff games are being shown, has about 48 million subscribers.

We don’t actually know how many homes NHL Network is in, as it’s not in the Nielsen coverage estimates, but “significantly less” certainly seems fair. So, yes, Golf Channel is a far better place to put a game than NHL Network from a perspective of “How many people will be able to watch it?”, even with the odd brand synergy. (If you think about it, though, that’s not much weirder than putting games on CNBC, which is supposed to be a business channel.) But it’s particularly funny that programming executives at CNBC and USA both said “Thanks, but no thanks” to playoff games, especially when you consider that it may well be in their networks’ best interests to do so.

As per the Wikipedia entry for Suits Season 7, its two most recent episodes drew a 0.3 rating/1.06 million viewers and a 0.2/0.95 million viewers. And those are both season-lows, so there’s definitely a chance Wednesday’s episode (which, funnily enough, is titled “Pulling The Goalie”) could do better than that. As per Shark Tank reruns, those are a little harder to find numbers for (as many outlets only publish numbers for originals), and we don’t know exactly what the Staten Island Hustle premiere did last Wednesday, but we do know it wasn’t in the Top 25 cable shows. (Maybe they should have hyped up those guys’ bomb scare record a bit more.) It is an original in its second week, though, and there’s an argument for CNBC trying to promote its own regular content instead of NHL playoff games.

For the record, as per Sports Media Watch, last Wednesday’s games on NBCSN (Philadelphia Flyers-Pittsburgh Penguins at 7 p.m. Eastern, Vegas Golden Knights-Los Angeles Kings at 10 p.m. Eastern) drew a 0.38/632,000 viewers and a 0.33/521,000 viewers. The game on CNBC that night (Minnesota Wild-Winnipeg Jets, 7 p.m. Eastern) drew 234,000 viewers. This week’s matchups are a little better than Wild-Jets for American broadcasters, as they’ll each have two local markets to pull from; however, it’s notable that local feeds are still available for these games as well, further reducing the national audience.

With games on NBCSN to boot, it seems likely hypothetical CNBC or USA numbers would be lower than the 632,000 NBCSN drew last week. And that’s certainly a bad choice for USA (even with Suits‘ numbers declining, it still does better than that), and might not be a good choice for CNBC either (Shark Tank reruns might do worse than the NHL playoffs, but they might not, and this lets them get their Staten Island Hustle in its regular timeslot). So it’s understandable why those channels made the decisions they did.

And this isn’t necessarily bad for the overall NBC Universal corporate empire. In fact, it’s probably good; the NHL playoffs seem likely to outdraw whatever Golf Channel was planning to run on a Wednesday night, and they give that channel some publicity. Meanwhile, USA and CNBC can tick along as planned without sports interruptions. But this does show just how highly those channels think of the NHL playoffs, and it is funny to see how far NBC and the NHL are going to try and promote this and emphasize links between golf and hockey, including with videos on the Golf Channel website (featuring former Lightning player Brad Richards) and a golfing promo from NHL analyst Jeremy Roenick:

Happy Gilmore has NOTHING on @jeremy_roenick.

For him, golf and hockey just go together. Watch tonight's #StanleyCup doubleheader on @golfchannel! pic.twitter.com/qcRaYvzYWh

“I love hockey, and I love golf, and I cannot believe that the NHL playoffs are on the Golf Channel!” Roenick spoke to Allen about that, too:

“I’m all for publicizing our great game of hockey on any and every platform, and as someone that also loves golf, I know golfers are complete sports fanatics,” said NBC analyst Jeremy Roenick, who is a scratch golfer. “These are two of the greatest sports on earth. The volume levels tonight in New Jersey and San Jose might be a little louder than the golf claps we’re used to hearing at the Ryder Cup or the Open Championship, but these athletes have the same passion and intensity, and passion and intensity are what the Stanley Cup playoffs are all about.”

Are we sure we can’t just show Roenick jumping on an alligator on a golf course again? Now that would get ratings…