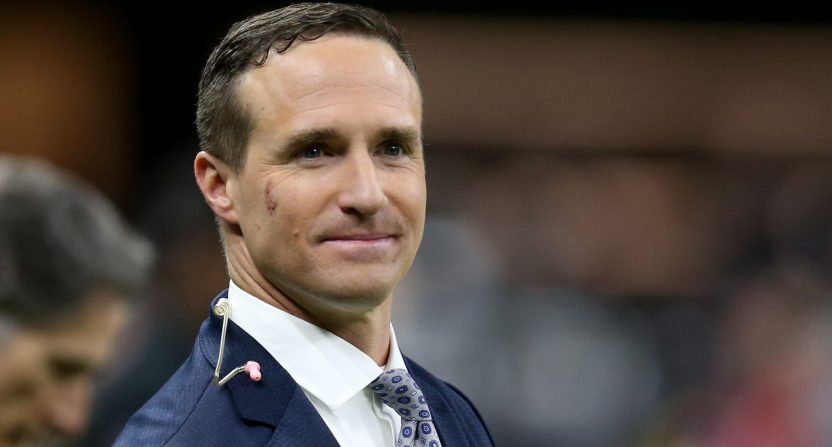 After just a year, the Drew Brees era at NBC is over. This news was reported last month, and confirmed by NBC’s Pete Bevacqua this week. The Brees tenure at NBC was most notable for how long Brees was an analyst in waiting (the first report about him joining NBC came in April of 2020, and he officially announced he was joining in March of 2021) compared to how long he was actually on the air (his first game as a Notre Dame analyst was September 11th, with his Football Night In America studio debut coming two days earlier. His final studio appearance was on January 23rd).

Brees’ performance as a broadcaster wasn’t wretched. He wasn’t a weekly meme like some broadcasters have been over the years. But when given a significant stage during the Bengals-Raiders playoff game, he struggled. Many of the criticisms aimed at Brees weren’t over the top or unfair, and they were mostly accurate reflections of his work. However, Brees was expected to be a broadcasting superstar. The inquiries from networks started before the pandemic. This very site wrote an article about Brees the potential broadcaster *ten years ago*. It always seemed like Brees would be good at this. If he stuck around at NBC, maybe he would have gotten there.

And while there is plenty of wondering about why it didn’t work out for Brees, he’s far from the only lauded talent to not live up to expectations as a broadcaster. The Jason Witten experiment didn’t work (to put it mildly). While not nearly as high profile as Brees, Mike Carey was the first rules expert for CBS, and he lasted two disappointing seasons before they moved on to the far superior Gene Steratore.

Ray Lewis is a similar case to Brees – tipped to be a successful analyst for years, but completely underwhelms once he finally gets the job. Unlike many of the other broadcaster busts, Lewis has actually remained in the media, earning gigs on FS1 and Inside the NFL. But instead of being a marquee analyst, he’s just another former player on the air.

Overall, I think that we (and by “we,” I mean fans, sports media reporters, and maybe even network executives) underestimate just how difficult it is for players to transition into the broadcasting world. When guys like Tony Romo and Greg Olsen debut and hit it out of the park, we expect that to be the rule, not the exception. Then you see a Brees, Lewis, or Witten debut on a high profile platform and struggle, and fans wonder what the hell anyone was thinking when they got hired.

This is probably a reason that pregame shows and top broadcast booths see such little turnover. CBS has kept the core cast of The NFL Today together since 2017. The core group of Fox NFL Sunday has remained largely unchanged since 2008. ESPN’s Sunday NFL Countdown added Tedy Bruschi in 2019, but the rest of the main cast has been together since 2017. Even NBC’s Football Night in America, which has had some upheaval with the departures of Brees, Liam McHugh, and new Sunday Night Football play by play broadcaster Mike Tirico, has kept Tony Dungy and Rodney Harrison around since 2009.

Before this spring’s round of musical chairs in NFL broadcast booths, change at the top was almost unheard of. Joe Buck and Troy Aikman worked together at Fox since 2002. Jim Nantz and Phil Simms were in the top booth at CBS from 2004 through 2016, and Nantz has teamed with Romo since. Al Michaels has worked with two partners during his tenure at NBC – John Madden from 2006 through the 2008 season, and Cris Collinsworth from 2009 through Michaels’ departure after the 2021 season. Two changes in total at three networks in 15 years! It’s ridiculous.

Anyway, my larger point here is that Brees won’t be the last player-turned-broadcaster to struggle in his new job. Maybe Tom Brady, the $375 million man, follows a similar path. Perhaps another player reaching the end of his career gets some heat as a dynamite analyst, and he struggles mightily. Jason Garrett, Brees’ reported FNIA replacement, has a lower profile than his predecessor, but is coming into the headline gig with only a few USFL games under his belt as broadcasting experience. There’s a non-zero chance he follows a similar path to Brees, or even goes the Bruce Arians route and heads back into coaching after a year as a broadcaster.

There are only so many broadcasting jobs out there, and that makes the misses all that much more glaring. Brees is the latest name on that list, but someone will follow him eventually.