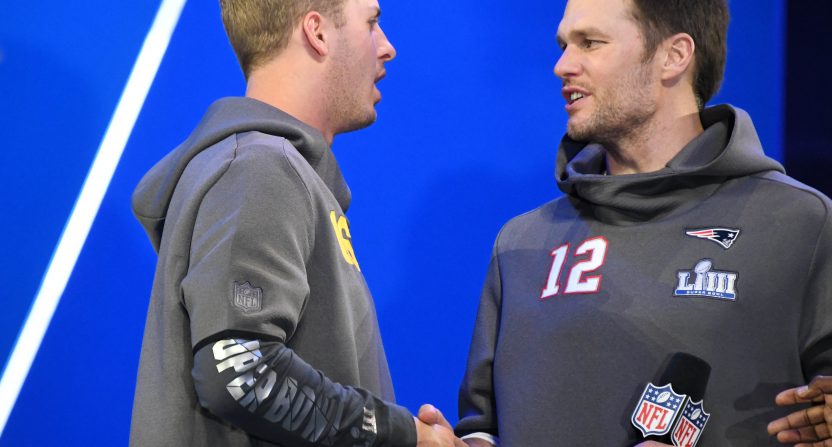 Super Bowl LII was something of a disappointment for the NFL – not because of the quality of the game, or the attendance, or the media attention, but because of the viewership. Last year’s game drew 103.4 million viewers, the lowest total viewership for a Super Bowl since 2009’s Steelers-Cardinals matchup. With that being said, it was still TV’s most-watched program in 2018, smashing everything else in its path, so it’s not as if the NFL had a complete failure on its hands. But losing eight million viewers from one year to the next was a disappointment, especially given the league’s well-noted regular season viewership struggles in 2017.

With that in mine, we polled our staff on the topic. What do you think the viewership for Super Bowl LIII will be next Sunday, and why? The all-time record for viewership is 114.4 million for the Patriots-Seahawks matchup in 2015, and while this game probably won’t approach that number, it’s surely to be better than last year…right?

Andrew Bucholtz: I’ll go with 107 million. The league as a whole saw ratings rebound by about five percent this year, which would produce around 108.6 million if that trend continued exactly. I think the actual trend is going to be a bit smaller than that given Patriots’ fatigue, and the essentially-flat year-over-year ad rates seems to suggest advertisers aren’t expecting huge growth. But having the Rams (who happen to play in the country’s second-largest television market) in the game seems positive, and I think we’ll see some decent growth from last year. I don’t think we’ll get back to the 110 million-plus range this year, but 107 million would at least put this above 2010 (106.5), and that wouldn’t be a bad result for CBS.

Phillip Bupp: Last year’s number was so low (relatively speaking), and along with the trend that NFL viewership has ticked up this year, I have to imagine Super Bowl viewership goes up this season. But at the same time, I’m not sure it will go up more than what CBS is hoping it will be.

Football fans for the most part are going to watch no matter what. And while we make fun of LA for their lack of enthusiasm for pro football and the Rams, a lot of people in LA will watch the game because the Rams are involved. LA is so massive that even if a quarter of the people in LA watch the Super Bowl, that would be more than if the entire population of Seattle watched their Seahawks play in Super Bowl XLIX, and that game has the all-time viewership record. What makes a Super Bowl go from a great number to an awesome number is the people who are watching for non-football reasons (commercials, halftime show, etc.). Both the halftime show and the commercials seem “meh” this year and I’m not sure people are as enthusiastic about either this season.

When you consider all of that, plus CBS not relying on Nielsen for their viewership numbers this year, this number can be just about anything, but I’ll go with 105.5 million.

There’s surely some Patriots viewer fatigue out there, and while the Rams are a very entertaining team on both sides of the ball (and with the NFL’s most-hyped young coach, for good reason), are they really a big draw to the casual fan? Do they even have a real fanbase yet/again? Jared Goff statistically put together a great year, but there’s little interest in him from a casual viewer perspective (and many such people probably have no idea who he is). It’s a fantastic matchup to the football nerd, but may not appeal as much to the general audience.

Ken Fang: I’m going to buck the trend here and predict the viewership will rebound back to 110 million viewers. In fact I’ll go with 110.4 million. Yes, the numbers shockingly went down last year, but with the NFL’s numbers back up this year, the Super Bowl’s numbers will as well. The Big Game is usually immune to factors like market size, Patriots fatigue, etc. and this year should be no exception.

Maroon 5 aside, there will be renewed interest in the Super Bowl this year and the numbers will reflect that and will return to the 110 million range after an off year.

Sean Keeley: I think the ratings should hover right around the same number as last year. Yes, there’s Patriots fatigue. And yes, the Rams might be exciting but they don’t really have the kind of stars that your non-football-watching relatives would know. So there’s certainly good reason to think the number will keep dipping. But…it’s also the Super Bowl. Do most people ultimately care who’s actually playing? It’s hard to imagine the numbers will dip below 100 million viewers at this point unless we get one of those 80s-style Super Bowl blowouts. Chances are the game will at least be competitive for a half and that’ll be good enough to audiences around to satisfy their goal of seeing the Patriots lose. Expect 103-105 million.

Ben Koo: I’ll chime in and go with a slight increase to 106 million viewers. I waffled on what would win out between the positive national trends ratings wise for this past season vs the fact that the Patriots in another Super Bowl has become the sports version of another predictable episode of Bar Rescue. I could see a back and forth competitive game push ratings even higher, but I think we’ll get good but not great game, and there will be a nominal but not massive ratings uptick.

Joe Lucia: In my opinion, we’re going to see an uptick, but not a massive one, because I think we’ve about topped out on potential viewership. With cord cutting, other streaming services, and hundreds of cable networks and other on-demand programming, there’s only so high viewership can go. Even with this year’s overall NFL increases, and the huge increases during the NFC and AFC Championship games, I think the increase for the Super Bowl will be more modest than the trends indicate. I’ll go with 106.9 million viewers. Nice.

Jay Rigdon: The NFL has seen an overall ratings boost this season, and that’s going to help push the Super Bowl back up to 109 million viewers territory. Other factors: the Rams are a legitimately fun team and the Patriots are a legitimately fun team to root against. It’s a bi-coastal Super Bowl for the first time since Seattle-New England, and that game set the record for overall viewership. And in between the coasts, a wide swath of the country will be recovering from the polar vortex, and probably not too eager to venture outside.

Plus, and perhaps this is the craziest statement here: Tony Romo doing the game for CBS might even be kind of a draw.

Matt Yoder: I’ll say 105 million viewers. To me the biggest factor is the national ratings trends with the NFL. The Super Bowl seemed to follow the trends in the last couple of years with declining interest in the NFL. With ratings ticking back up this year throughout the regular season, it makes sense that we’d see the same thing for the biggest game of the year. While there are other factors like Patriots fatigue and Los Angeles having a team in the Super Bowl for the first time in forever, I’m not sure those will move the needle either way.