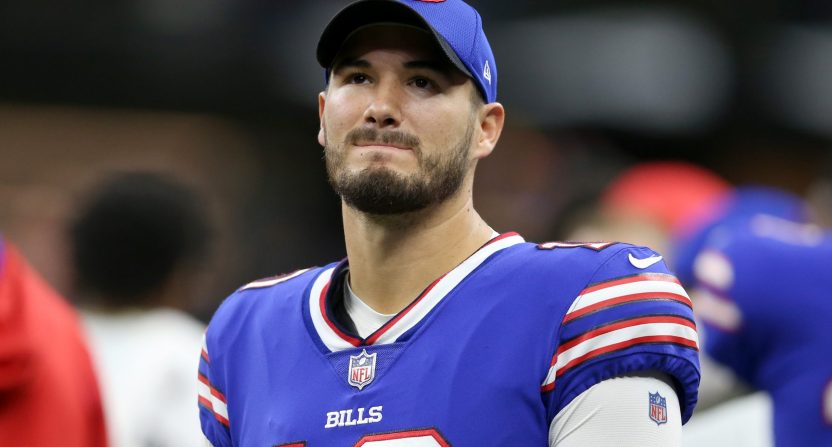 The NFL calendar is essentially 24/7/365 at this point. March is usually known for other sports, of course, but with free agency set to begin and a few huge quarterback transactions taking place this week already, it’s clearly a sign that the league’s content machine never sleeps.

But that also means reporters and writers need to fill plenty of virtual blank space; between that and the general brainworms of people in NFL front offices, player narratives can get whipped up into a very weird place. Often that manifests in things like negatively slanted coverage of draft prospects, but occasionally it comes in the form of overly positive praise for mediocre veteran talent. Such has been the case for former Bears starter (and Bills backup last season) Mitch Trubisky, who is near the top of the list of available quarterbacks.

That is obviously much more a function of a weak free agent crop and a fairly weak draft class at the position; Trubisky was certainly not served that well by Matt Nagy in Chicago, but he also exhibited plenty of fundamental flaws that should make anyone expecting him to be more than a shaky stopgap solution feel a bit silly about that stance.

The Mitch Trubisky INT against the #Falcons that got him benched and now replaced as a starter on the #Bears for Nick Folespic.twitter.com/mhgjj18NOJ

Today, though, the NFL Network’s Tom Pelissero published a standard free agency roundup piece in which went over names that could surprise by landing bigger contracts than expected. Trubisky is on it, of course, and again, that’s not a surprise; the dearth of options puts him in a good position to try and land a bounce-back opportunity. Where Pelissero loses points, though, is in how his piece lays out Trubisky’s strengths:

The No. 2 overall pick by Chicago in 2017 took a year to reset as the backup in Buffalo — and he now figures to have a strong chance to start again in 2022. Whatever the perception might be, Trubisky is a one-time Pro Bowl selection who was 29-21 (!) in parts of four seasons as the starter on a Bears team that lost before he took over and lost again after he left.

Statistically in Years 2-4, Trubisky compares favorably to the likes of Peyton Manning, Ben Roethlisberger and Philip Rivers at that point in their careers. He’s a good athlete with running ability. He’s a leader. With so many lingering QB questions, somebody will bet on Trubisky’s upside to at least come in and compete. It wouldn’t be a surprise if he commands around $10 million plus incentives on a one-year deal.

Even ignoring the fairly context-devoid citation of his win-loss record in Chicago (which was boosted entirely by a strong defense; if the offense had been the reason for success he, Nagy, and GM Ryan Pace would still have jobs there), the player comps cited are just absurd to the point of disbelief

Again, filling content quotas isn’t easy, and Pelissero is a great reporter and newsbreaker. But we don’t need to pretend that Trubisky “compares favorably” to Peyton Manning in years 2-4 of his career. That is just completely wrong, to the point that Pelissero maybe meant Eli, not Peyton. Roethlisberger and Rivers are also generational quarterback talents, and whatever raw numbers might suggest Trubisky is comparable are taking place in a very different statistical environment than the NFL of the mid-00s.

Granted, none of those players won an NVP award in a playoff loss, so maybe that’s the statistical difference here.