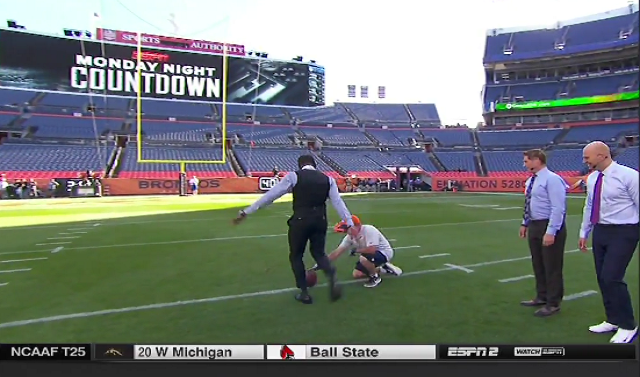 Randy Moss was amazing during his NFL playing career with his abilities to make plays catching the football. But in his short time as an NFL analyst, Moss’s most impressive moment might have come with his foot on Monday.

As part of the Monday Night Countdown pregame show to Monday’s snoozer between the Denver Broncos and Houston Texan, each former player on ESPN’s panel attempted a short field goal. The most impressive attempt by far came from Moss, who nailed the kick with plenty of distance. He did so straight on and in dress shoes:

Moss’s kicking ability doesn’t even include his fantastic celebration. It probably would’ve gotten him fined in today’s NFL, but you still have to appreciate his ability to kill it after all these years.

We see just how good Moss is when Charles Woodson steps up to try a field goal.

Well, that was a disaster. His fake excuse is pretty comical, however. When in doubt, blame the altitude.

While Scott Van Pelt probably goes a little far with saying that Moss is bringing back the straight-on kick, it’s entertaining nevertheless. This is something that could be needed with anything NFL-related. Especially with this week’s Sunday Night and Monday Night Football disasters. Give us more wide receiver made kicks and less bad offense.