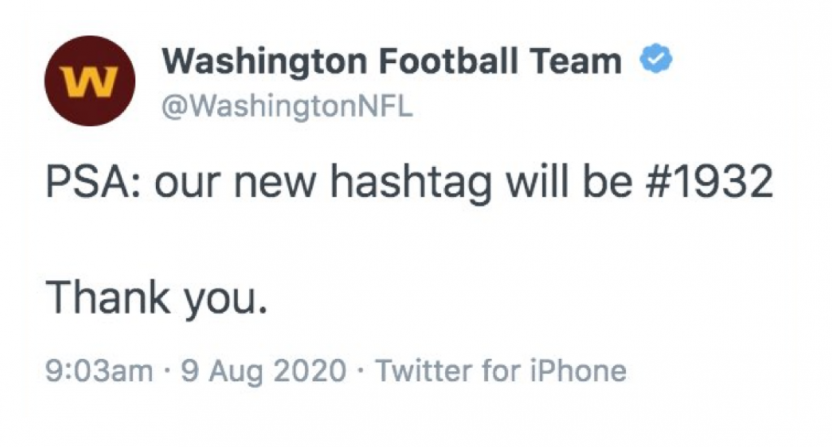 The Washington Football Team finally getting rid of their racist nickname, if only reluctantly, has been one of the few positive steps the organization has taken.

(They’ve also been accused of being an organization that tolerated and/or fostered rampant sexual harassment, including of women in media, which has been the overarching storyline for the team.)

Today, the Washington Football Team (as they’re going by for the upcoming season, until a new name is selected) attempted to launch a new Twitter hashtag: #1932, commemorating the founding of the team. Unfortunately, whoever was in charge of this decision failed to note one very important feature of Twitter hashtags: they can’t consist solely of numbers.

The Washington Football Team announced its new hashtag was #1932 but didn't realize that you can't hashtag numbers. pic.twitter.com/LWMayqxnqO

By 10:30 AM, the team had already been forced to delete that tweet and head back to the drawing board.

ok so no new hashtag yet ?

give us your options of what you want!

Predictably, this went over welll:

#WFT till a final decision is made on the name.

This, perhaps, is the most important point:

Knowing how these things unfold, it’s remarkable to me that an entire department — that met multiple times with other business segments to discuss these options — eventually came up with a hashtag that in fact could not be a hashtag. Quite the offseason for Washington. pic.twitter.com/S6hFLe5t2J

Anyone who has ever done anything in a corporate environment knows the layers of management a decision like this has to pass through. That something like this can get through means that Washington’s structure is either woefully lax when it comes to quality control (this is believable), or they are stuffed to the brim with management that doesn’t have the ability to ask the right questions to begin with, much less come up with real solutions (this is ALSO believable.)

In any case, you have to give them credit: it’s hard to imagine a branding exercise that resulted in something so incredibly evocative of an organization’s brand.