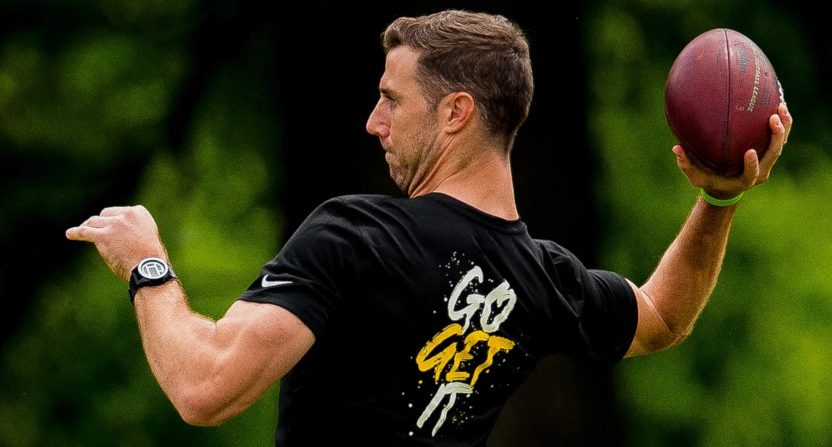 The Washington Football Team has been in the headlines recently both for their name change and for a story detailing past instances of sexual harassment in the organization. Now, they’re taking some criticism over a tweet they sent Monday night, then deleted. As per Mike Florio of Pro Football Talk, the team initially tweeted that quarterback Alex Smith had passed his physical (which would be great news; Smith’s 20-month journey back from a gruesome leg injury has been a big story, one even chronicled by E:60), but that he was put on the team’s physically unable to perform (PUP) list. As Florio writes, though, the NFL’s PUP rules mean that both of those things cannot be true:

Placement on the PUP list means that the player hasn’t passed a physical. Of course, this counters Smith’s recent claim that he has been cleared for all football activities.

While the team deleted that tweet, they left up this one:

Alex Smith is moving in a positive direction ?

And that link comes with the same “passed physical and is placed on the PUP list” subheading that can’t be true. And while the article itself no longer includes the claim that Smith passed his physical, its URL (“https://www.washingtonfootball.com/news/alex-smith-passes-physical-placed-pup-list-training-camp-2020“) still does. Here’s what the article said about Smith’s physical as of 9:20 p.m. Eastern Monday night:

Washington Football Team quarterback Alex Smith, who has been recovering from a gruesome leg injury for the past 20 months, was placed on the Physically Unable to Perform list, the team announced Monday.

Smith reported to the Inova Sports Performance Center on Thursday for COVID-19 testing and then took a physical with Washington Football Team doctors on Monday afternoon.

Smith’s placement on the PUP list is viewed as a positive step toward his ultimate goal of returning to the field. It allows the team to continue monitoring his condition as Smith continues his recovery.

But weirdly, this comes after Smith told ESPN’s Stephania Bell Friday that his surgical team told him “I had zero limitations and could even resume some football activities.” It’s possible that he didn’t pass that physical Monday, allowing him to be put on the PUP list, but it’s strange that the team would initially write that he did.

And it’s unclear why Washington would want to put Smith on the PUP list in the first place. As Florio notes, “Ultimately, there’s no benefit to keeping him on the active/PUP list. He still counts toward the 80-man roster, and his $16 million salary for 2020 already is fully guaranteed.” They may not want him participating in practice at the moment, but they could seemingly do so without using this list. NFL Network’s Tom Pelissero and Ian Rapoport reported earlier Monday that the PUP list was likely the plan for Smith, though:

Among the other benefits of Alex Smith being able to work out on the side — He gets to be around the other QBs on Washington’s team. His experience is valuable. https://t.co/rzxuyPRu8l

Of course, players can be moved off the active PUP list at any point ahead of the regular season, so this isn’t necessarily a big deal for Smith’s recovery. It’s just a strange designation for someone who had seemingly been doing so well. And this gets very strange when it comes into how Washington has talked about it, especially with the initial claim that Smith did pass that physical (the team isn’t currently claiming that in their article, even if their URL and Twitter subheading still claim that).

This maybe makes more sense if Smith didn’t pass that physical, but it’s then odd that the team would initially claim he did. It’s also possible that the team’s website and social media teams misinterpreted what they were told about Smith’s physical and the roster move, or that they were just told incorrect information. But any of those scenarios would come with its own set of questions about what’s going on in the Washington offices.

None of this is necessarily the biggest deal in the world. Whether Smith is on the PUP list or not at this point doesn’t seem to have a huge impact on anything. And even as Twitter and website mistakes by teams go, this isn’t necessarily a massive one. But it is curious for a team’s official social media handle and their website to make two claims that cannot simultaneously be true; that Smith passed his physical, and that he was placed on the PUP list. Even the Epimenides paradox seems easier to unravel than that.