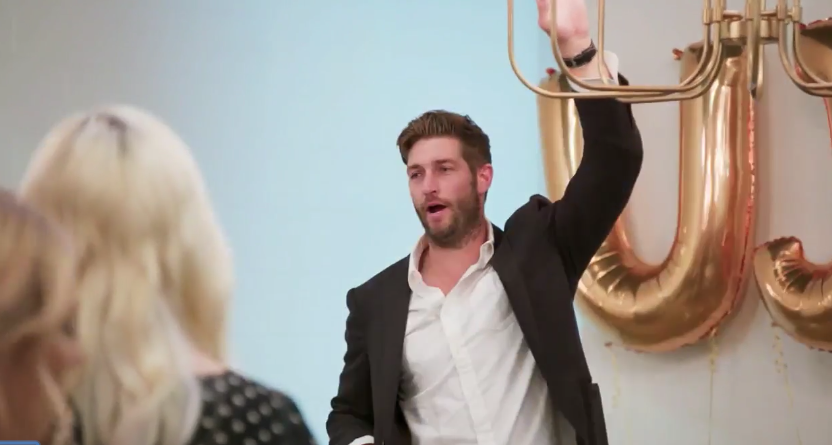 It’s been a long week anticipating the season finale of this hot mess express, and then on Thursday, Kristin dropped a bombshell:

That’s right the Cavallari-Cutlers and their merry band of dysfunction are returning for a second season in 2019. Hopefully this brief respite will give the neurons I’ve lost enough time to regenerate. Here’s to hoping, at least.

It’s the day of the Uncommon James launch party and Kristin’s mom is in town to show her support. You’ll be glad to know that Kristin is still wearing her signature sparkly jacket sans shirt for interviews. Thank god. It’s becoming my North Star.

The store looks simply beautiful, all white and gold and minimalist, and I kind of want to move in. Especially if I can have a bottle of that glittery champagne, which I’m sure cost more than my television. The launch party excitement was short-lived, though, because Brittainy discovered a major disaster: there was a mixup with the catering, and like the shirt under Kristin’s sparkly jacket, the food wasn’t there.

The soon-to-be-murdered caterer, Chef Laura, promises to “make this happen” and later arrives carrying what I would take to a friend’s house on a random Tuesday: hummus, fruit trays, and grocery store sushi. JK I would never take grocery store sushi. I like my friends.

Speaking of things that make you retch, Brittainy’s boyfriend Jon Stone arrives at the party looking like a broke musician/biker combo, complete with greasy ponytail. This is a launch party, Jon, not hungover brunch. Brittainy is all “Look at my boo being supportive of my big day. He’s so dreamy,” as if he should be awarded a Nobel Prize in Boyfriendry for doing the most basic thing. Of course, he can’t hold it together for long and wants to leave due to hunger. I mean, we’ve established that the food sucks, but that’s still not cool. Aside from that, the night goes smoothly and Kristin is able to overcome her public speaking phobia to deliver her not-a-speech.

The home goods line launches the following day, but it doesn’t take long for the proverbial shit to hit the fan (hey, I wonder if Uncommon James sells fans?). Shannon puts out a newsletter announcing the new line, which contains a broken link, and sends Kristin into a dimension of pissed off I can wholeheartedly identify with. Adding insult to injury, Kristin discovers that the home goods shipping prices are incorrect on the website and she’s hemorrhaging money. She goes full Cavallari and announces she’s going into the store right away. Like, LOL, your store opened today, were you planning to sit this one out? She lays into Brittainy and then Shannon, who proceeds to defend herself in the worst possible way:

Wait no. This was the worst possible way:

Let’s review. Shannon initially says the link was broken because she didn’t know the correct link,and then she admits that she just guessed the link and got it wrong (WTF?). Then she attempts to gain sympathy by saying that she was drunk on tequila and set her alarm for 2am to make sure everything went off as planned, and was all “Where’s my goddamn parade?” about it. YOU GUYS, SHANNON IS BACK. Despite all of this, Uncommon James exceeds its sales targets for opening day. I can only imagine what the translates to when they’re hawking measuring cups for $66. That’s why they can afford the good champs.

Fresh off her social media snafu, Shannon is determined to redeem herself in the form of Taylor’s engagement. The plan is, Shannon will drive Taylor to her favorite antique store, where Mike will be waiting on bended knee with a bottle of Martinelli’s (for baby mama reasons). I learned two things: 1) I will cry at literally any proposal, and 2) they are naming the tiny human Walker.

Speaking of love stories, do you remember in Romeo in Juliet when Romeo said, “Do I make your life, just so much better?” And Juliet said, “I mean, you definitely give my life content.” Such a classic romantic moment.

Seriously. I cannot believe that was actual an exchange between Brittainy and Jon, two people who have been together for three years:

I was really hoping that Brittainy would dump Jon during the finale. I know we don’t see the whole picture, but their priorities and communication styles could not be more different, and most importantly, I don’t like him.

Also smashed into this episode is the news that Kristin and Jay have closed on their farm house, and are renovating the entire place. It looked fine to me, but whatever. Also, Kristin has drinks with Kelly, who confirms that The Canadian is a thing of the past. Neither of these scenes were particularly compelling, except for discovering that the chicken coop at the farm house is called The Pollo Palace.

After having some time to think about the launch, Kristin decides to make some moves in the shop. Brittainy will now manage the whole home goods side of the business, while Reagan is promised an Assistant Manager gig with no raise because she’s already overpaid for what she does (her words, not mine). Shannon asks for additional responsibilities, but Kristin isn’t willing to trust her until she stops screwing up. Aside from Brittainy, I wouldn’t trust any of these people with a sharp pencil.

As the sun sets on Season 1, the camera centers on Kristin and Jay in the car. They’re driving down the road, just talking about normal things, like how her money is hers, but his money is theirs. Of course, we can’t close the season without Kristin getting in one final dig about Jay’s career aspirations. He’s a reality TV star now, Kristin, get off his back.

Stock Up: Brittainy, because she’s such a badass at work.

I also love that in a show filled with prima donnas, Brittainy is virtually unflappable.

Since I’ve declared Jon bankrupt, I’m going to pick on Shannon. After impressing me in the past couple of weeks, her true colors came through in this episode. I still love you Shannon.

Best Jay Moment: Some people signal an impending speech by delicately tapping a fork on a champagne glass, but Jay Cutler is not “some people.”

Did Shannon Cry? Oh yes. Yes she did.

This was my second favorite episode of the season after the Florida team retreat. It was filled with everything you expect in an episode of Very Cavallari: drama, tears, and Jay being Jay.

That’s all for now. See you next season!