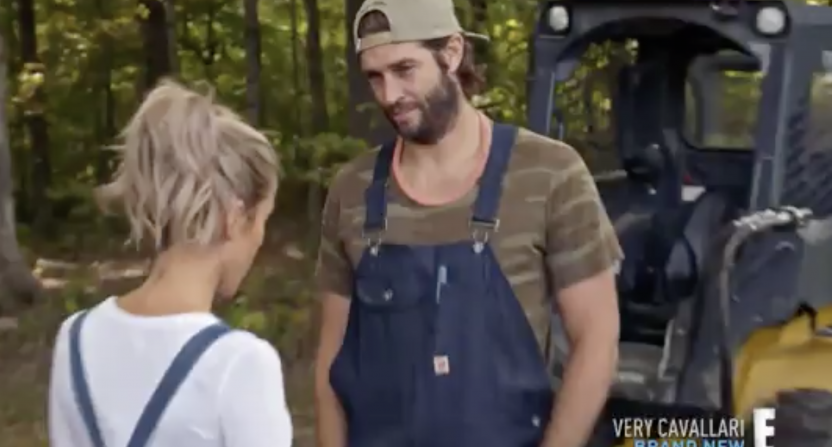 Ooooooooh Sunday Niiiiight. Our coverage of Very Cavallari continues this week with Episode 3, Bring Your Jay to Work Day. New episodes air on Sundays at 10pm EST on E!

In this episode, Jay dabbles in management consulting related to the Uncommon James shipping crisis, Kristin acquires a warehouse for her business, and a new (to us), but controversial character is brought back to the store.

Last week we discovered a major issue with the Uncommon James supply chain: the shipping department has been sending out incorrect orders or empty boxes at least 10 times per week. Of course Kristin is handling this in the cool, calm, and collected manner that we’ve come to expect from her, which is: she’s losing her shit. If you thought you already saw the episode about The Great Shipping Debacle of 2018, you did. That was last week. But apparently we’re still fixated on this topic because Shannon got fired two episodes ago and there’s not much else to talk about these days. Personally, I vote for a 70% reduction in the time the show devotes to shipping fuck ups,and a 70% increase in time showing images of Jay Cutler in overalls. 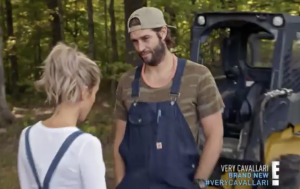 The hair. The beard. The camo shirt. The overalls. He’s perfection personified.

Back to shipping. Ten incorrect orders per week feels like a low number for their volume, but I’ll let this slide and try to channel Kristin’s atomic-level outrage. With an issue this dire, she has no choice but to hire a professional consultant to give her feedback on her staffing and business processes. But instead, she selected this bearded idiot you see above and sent Jay to the store to figure out why the people can’t put the things in the boxes.

I’d like to give credit to Jay for shedding his Duck Dynasty appearance for his unpaid consulting gig. He shaved his Andrew Luck beard, styled his hair like David Beckham, and even put on a sport coat for the occasion. Much to my amazement, Jay skulking around sockless and in loafers with a pencil and notepad yielded some insightful suggestions. He recognized that Brittainy is trying to [micro] manage too much and that having two people (Kelsey and Matt) oversee the shipping department creates diffusion of responsibility, where no one is actually in charge. Jay reveals that “No one knows what Matt does” and also Kelsey cried:

Like any good consultant, Jay put together a really professional slide deck to communicate his feedback to his client: 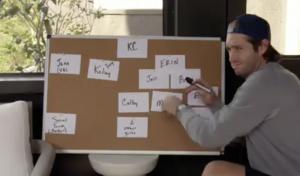 Bottom line: Kristin is making some personnel changes that will hopefully result in The People Putting The Things In the Boxes.

Side note: Opening an empty box from Uncommon James feels like a perfect metaphor for this show in general: you’re excited for it to arrive, but always wind up disappointed.

Again, I’m sure it has nothing to do with this show, but Kristin’s business is booming and they need more space for the shipping people to not do their jobs, so she acquired a warehouse. But who will help them move all of their inventory to the new space? Wirth and his army of hot gym rats, of course. You might remember that Wirth traded in being Kristin’s sales bitch for owning a gym with Tim McGraw next to Uncommon James, which feels like a better fit for his skillset.

And wow was there some low-key sexual harassment in this scene. Customer Service Colby was looking at Wirth’s employee Cole like my dog eyes a steak, and Brittainy and Reagan did this:

Since Shannon’s departure, it’s clear that the show is trying to fill a cavernous drama void, and they might have identified the fix: Kaylee. 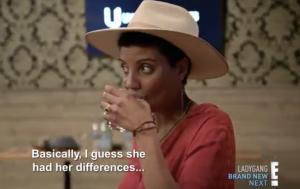 Apparently Kaylee used to be the store manager, but she was fired by “HR” when Kristin was at the Emmy’s. Two things: 1) Someone was fired and I was not informed? What kind of a show is this? 2) UNCOMMON JAMES HAS AN ACTUAL HR DEPARTMENT? Did they see the scene where all the women ogled the gym rat man meat? Do they see Kristin yelling at people on the regular?

Kristin reveals that Kaylee was fired because she rubs people the wrong way and also ripped a phone out of a person’s hand when they were speaking to a customer. But it’s totally fine because she cares about Kristin’s brand, and now she’s re-hired.

Most of the Uncommon James staff are apoplectic about this decision and all I can say is yesssss. Bring me the drama. It sustains me.

Jay was particularly deadpan this episode and I’m here for it.

Neither Jay nor Reagan know what it is that Reagan is paid to do.

Brittainy’s stock is waaaay down this week after I learned she set the heat in her car to 88 degrees, which made me side with her idiot boyfriend Jon Stone. I hate it when I agree with Jon. He is so stupid he thinks Jay is a Hall of Famer. That’s how much I dislike Brittainy this week.